Nearly two months after Facebook announced the creation of its Social Good team, which aims to build tools that help people do more good around the world, the social media giant has launched its latest cause-focused products: fundraiser pages and improved Donate buttons for nonprofits.

“Fundraisers” are dedicated pages where nonprofits can raise money for specific campaigns, whether it’s for the refugee crisis, to help eradicate malaria or to build a clean water well. The Donate button, previously reserved for ads on the site, will now appear on nonprofits’ Pages and posts, allowing users to contribute directly from their News Feeds.

The new fundraiser pages — similar in format to event pages — allow nonprofits to describe a particular campaign and collect donations directly from users, and will also showcase a progress bar toward its goal. Any fundraiser shared by a user in a post will display the new Donate button as well, allowing users to contribute through the post itself.

Donate buttons on the nonprofits’ main Pages will remain static, right below their cover photos, providing a constant place to collect contributions even as they update their Pages’ content. It also allows users to choose whether to provide their emails — an important aspect for a nonprofit hoping to increase its donor base.

It’s still up to the individual organizations, however, to be transparent and show users where the money is going. 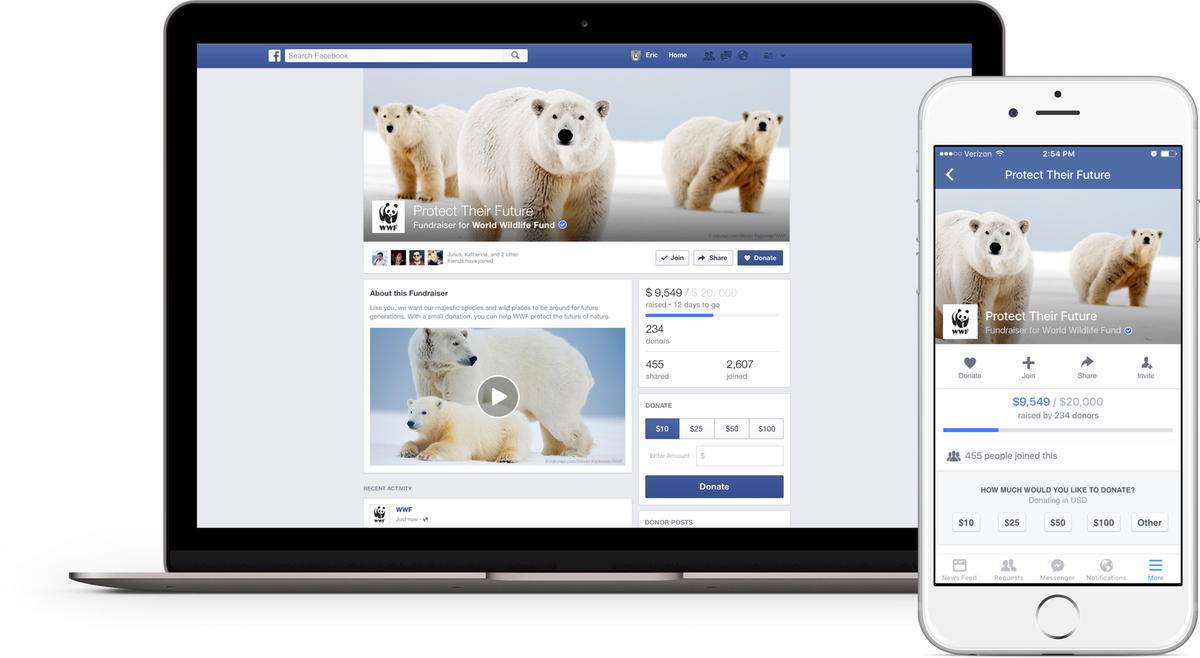 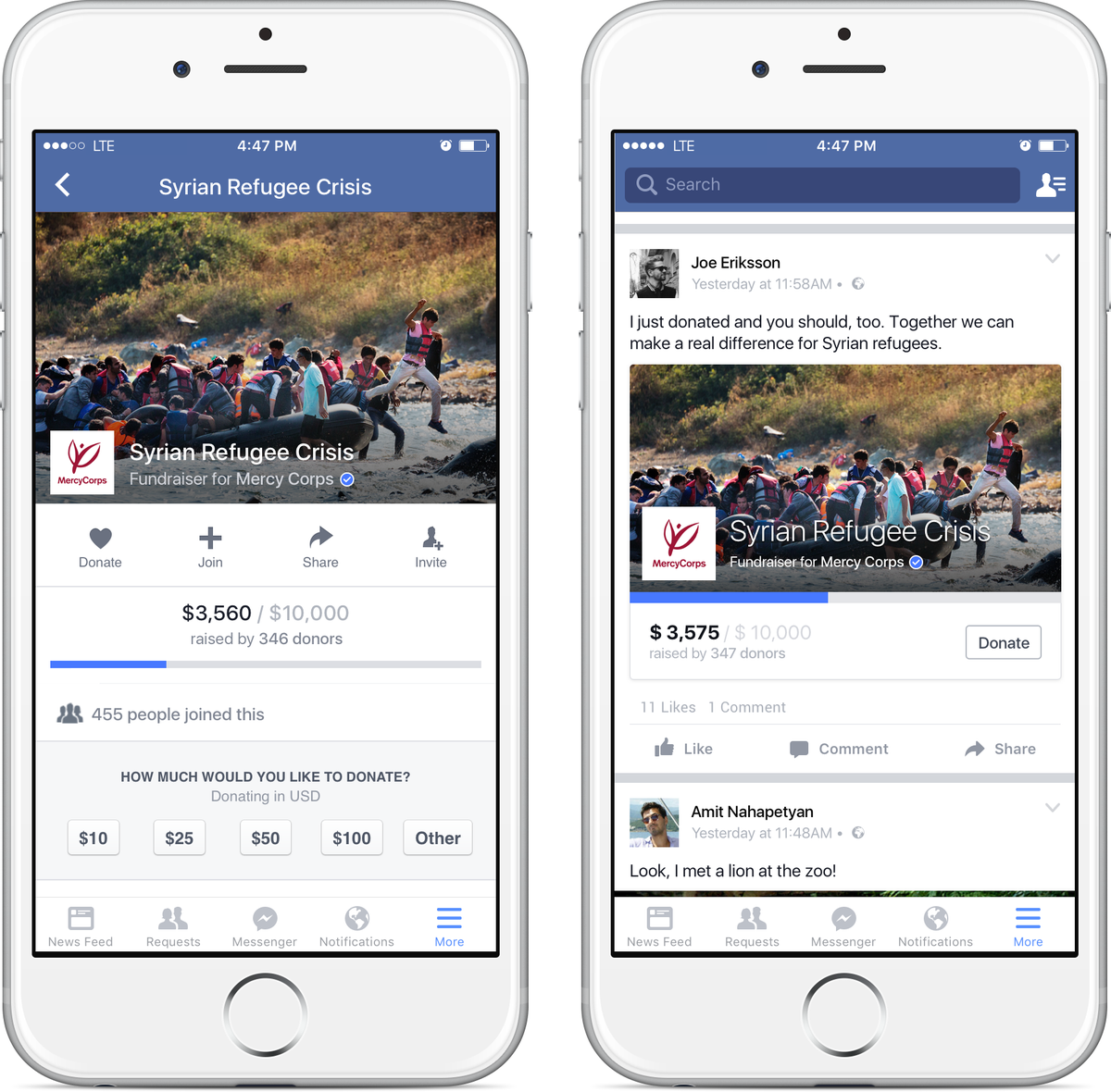 As of Wednesday, fundraisers and the new Donate button are being used by at least three nonprofit partners — Mercy Corps, the National Multiple Sclerosis Society and World Wildlife Fund. The features are already live for a total of 37 nonprofits across a range of causes, including (RED), charity: water, RAINN, UNICEF and Water.org, which plan to launch fundraisers throughout the holiday season.

Facebook is not currently charging its partners for using the products, but it will eventually implement a fee that covers operating costs at some point in 2016.

The goal is to break even, not make a profit, the company says, and Facebook says it will charge a fee that is on par or less than the industry standard.

The launch is supposed to encourage additional nonprofits to sign up for the new features in 2016. Interested organizations can find out more at donations.fb.com; right now, Facebook is focusing on U.S.-based 501(c)3 organizations, but plans to expand internationally next year.

Facebook will vet all the participating nonprofits — they must be certified, have verified bank accounts and Facebook Pages, and comply with Facebook’s Community Operations Standards.

Naomi Gleit, Facebook’s VP of product management and head of the Social Good team, announced the new products in a blog post on Wednesday, saying many volunteers, donors and activists already use the platform for causes — and this is just the next step in empowering them to do so.

“People raise money for disaster relief, they search for missing children and they bring attention to the issues they care about,” she wrote.

“We’ve seen from our community that when people take action, lives are changed.

We’ve seen from our community that when people take action, lives are changed. We know we can do more to enable these connections.

Indeed, this announcement comes just days after the Beirut and Paris terror attacks, when we saw two of Facebook’s previous tools in action. Safety Check, which Facebook launched earlier this year after the Nepal earthquakes, allowed people in Paris to tell friends and family they were safe (the tool was alsoactivated on Tuesday in the wake of the bombing in Yola, Nigeria). And many users used the tool that superimposed the French flag over their profile pictures to show solidarity.

Other social good products have included Amber Alerts to search for missing children, as well as a “Donate Now” button at the top of users’ News Feeds for specific causes, such as ALS research during the Ice Bucket Challenge or supporting victims of the Nepal earthquakes.

The latter ended up raising $15.5 million for Nepal efforts.

But Facebook is now testing the suite of new fundraising tools to bridge nonprofits with its massive user base — 1 billion daily active users, according to an earnings report earlier this month.

It’s unclear whether Facebook will ever extend the fundraiser product to individual users, but it certainly seems possible, as it would also mean some competition for social good crowdfunding sites like Crowdrise, as well as popular platforms Indiegogo and Kickstarter.