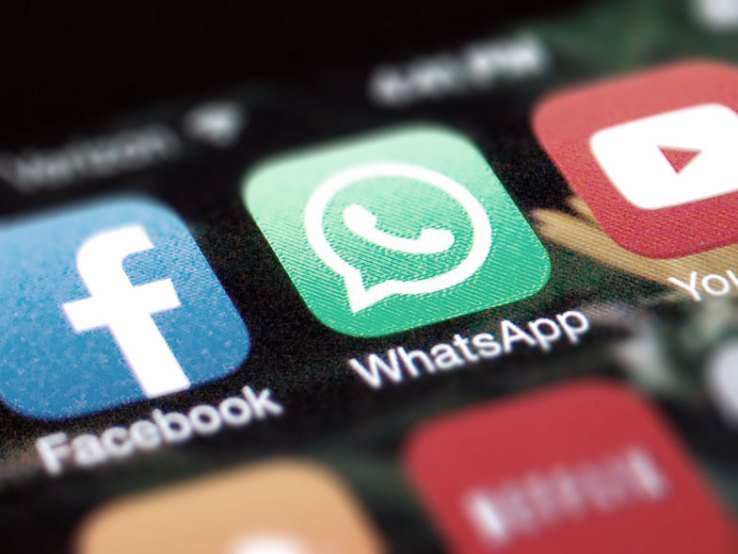 A team at the TechCrunch Disrupt London 2015 hackathon has created what they say is one of the first personal assistants for the WhatsApp messaging platform. CalledWhatsBot, the assistant uses a combination of artificial intelligence, location data from Foursquare, and mapping data from Esri in order to help you find places to meet up with friends, family, or colleagues.

To use the assistant, you simply add the WhatsBot’s phone number to your WhatsApp contact list, just like adding any other contact. Afterward, the bot can be used in a group chat in order to automatically suggest a meeting spot that’s positioned in between all the different participants’ current locations.

In order for WhatsBot to determine users’ locations, they must first share their position using the feature in WhatsApp that lets you post your coordinates and a map to your group chat. WhatsBot will then thank you for sharing your position and proceed to determine the best coffee shop where everyone can easily meet.

Created by a team from England, Spain and France, Pierre Becerril, Nil Sanz, and Camille Zittoun, the idea for WhatsBot was dreamed up at the hackathon this weekend after several hours of discussions and debates, they tell TechCrunch. 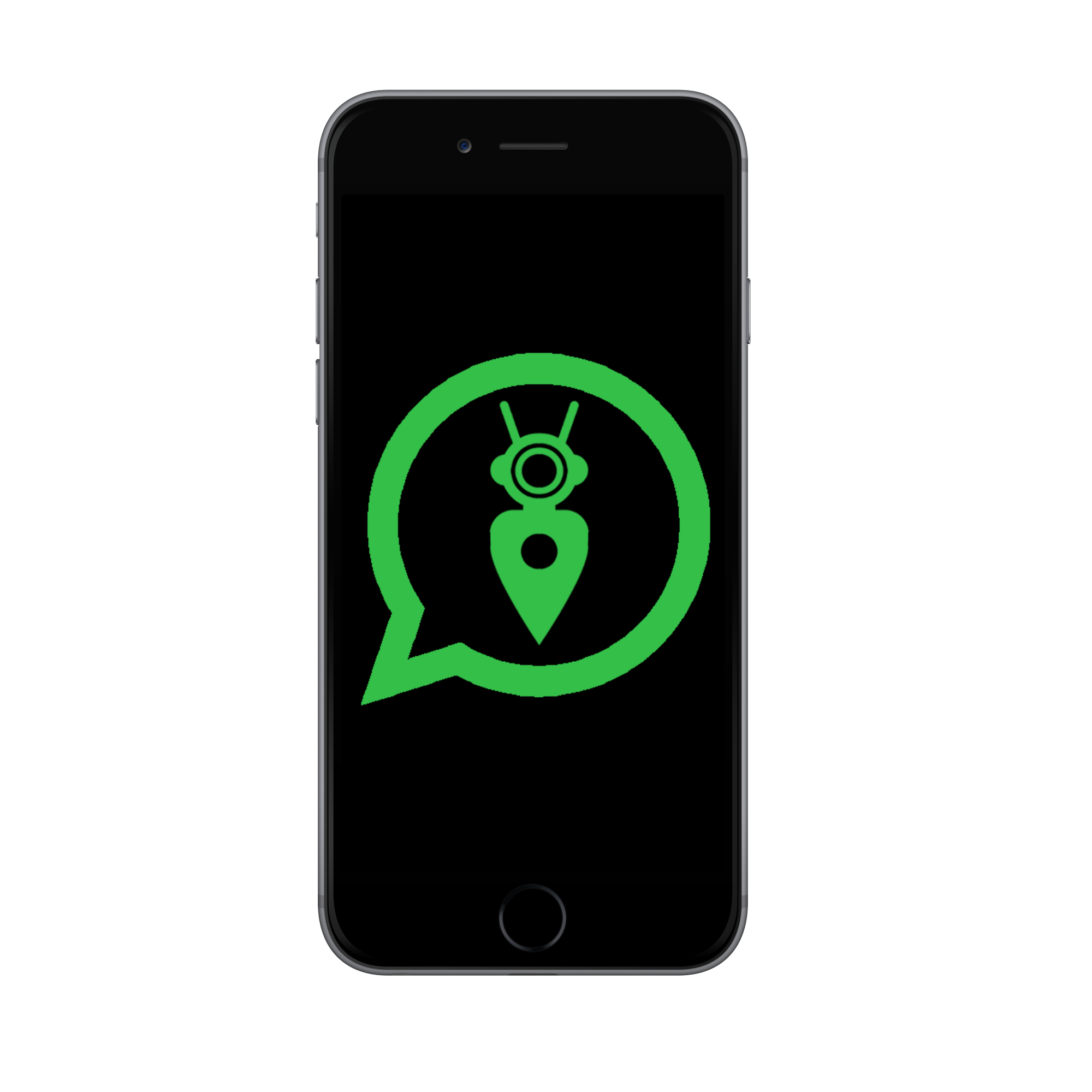 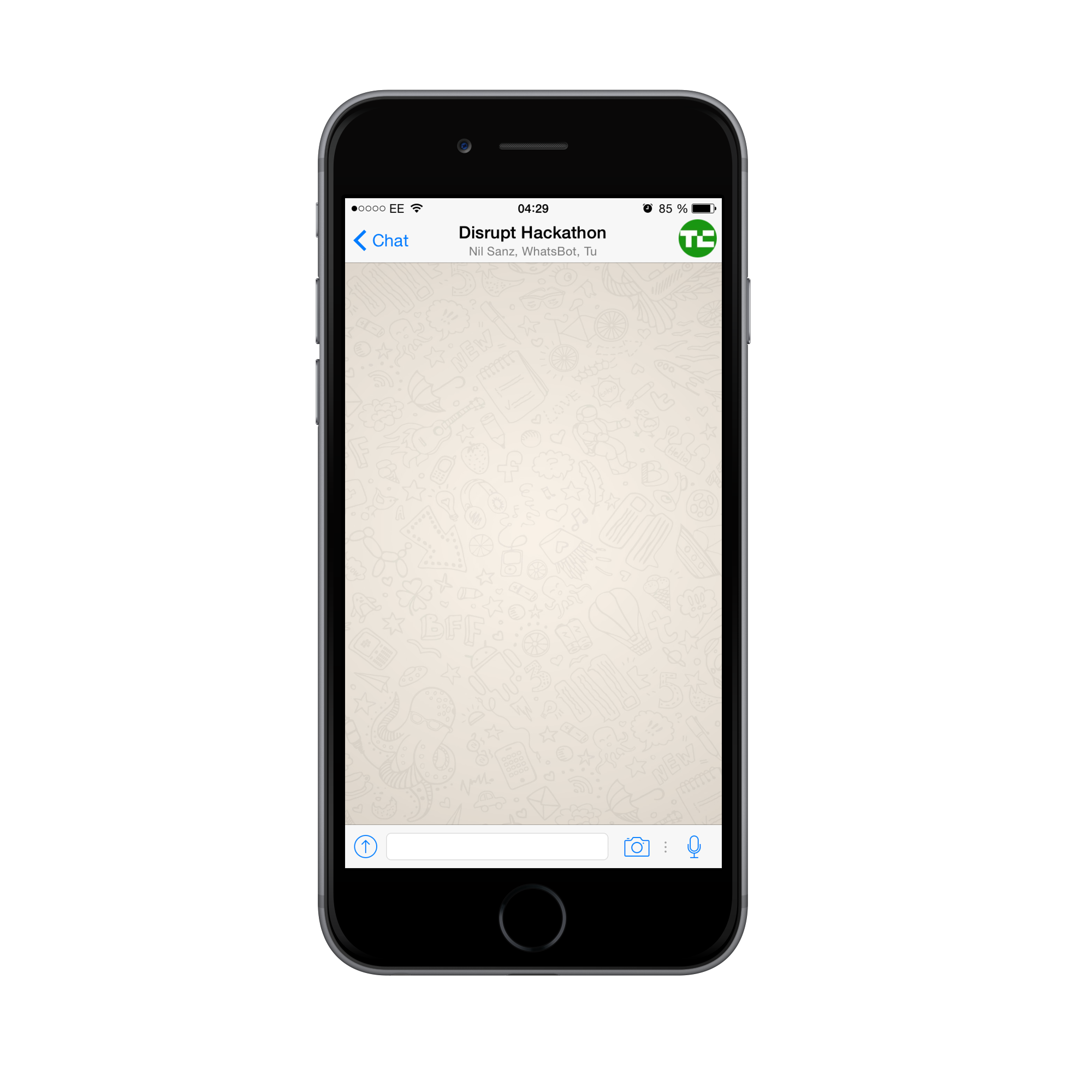 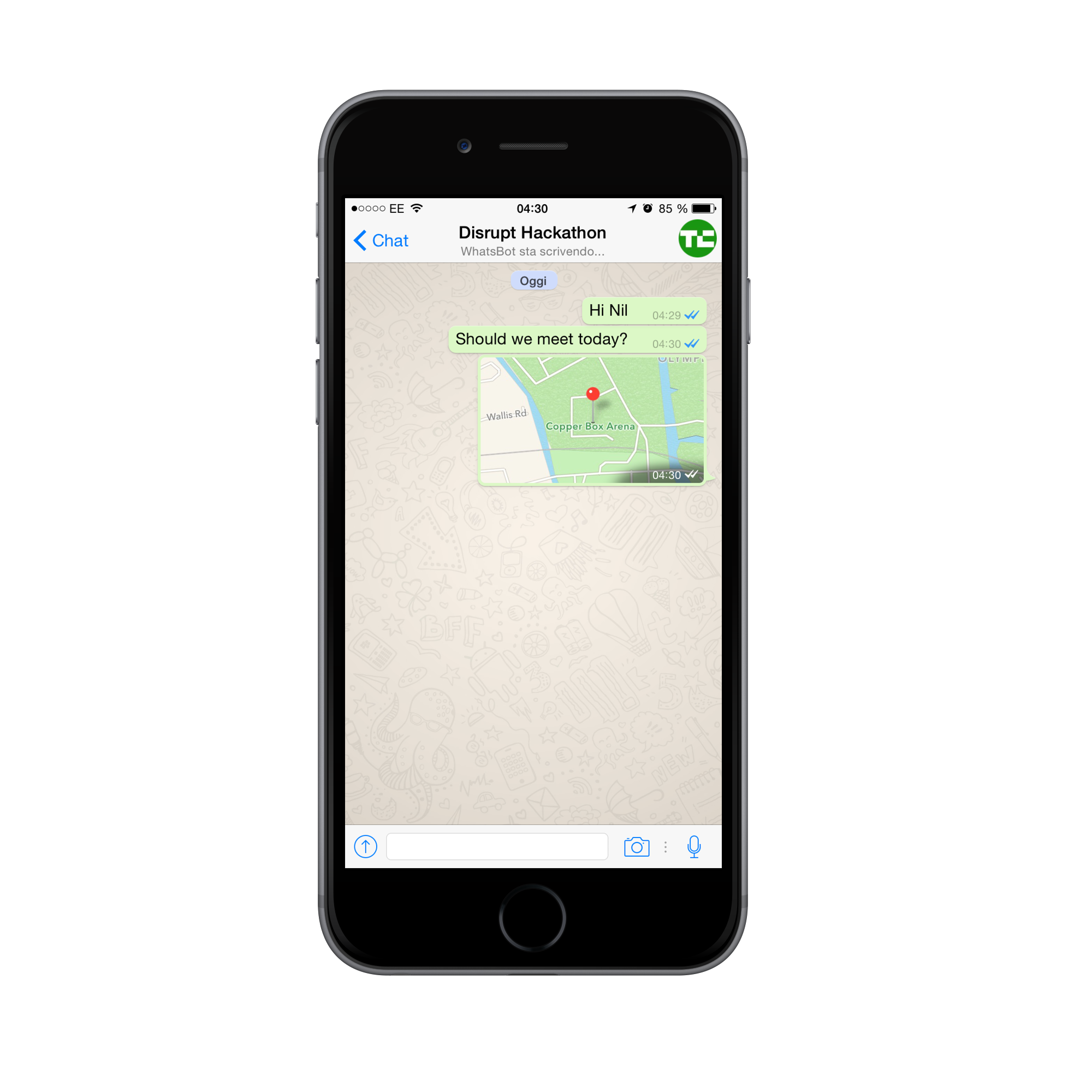 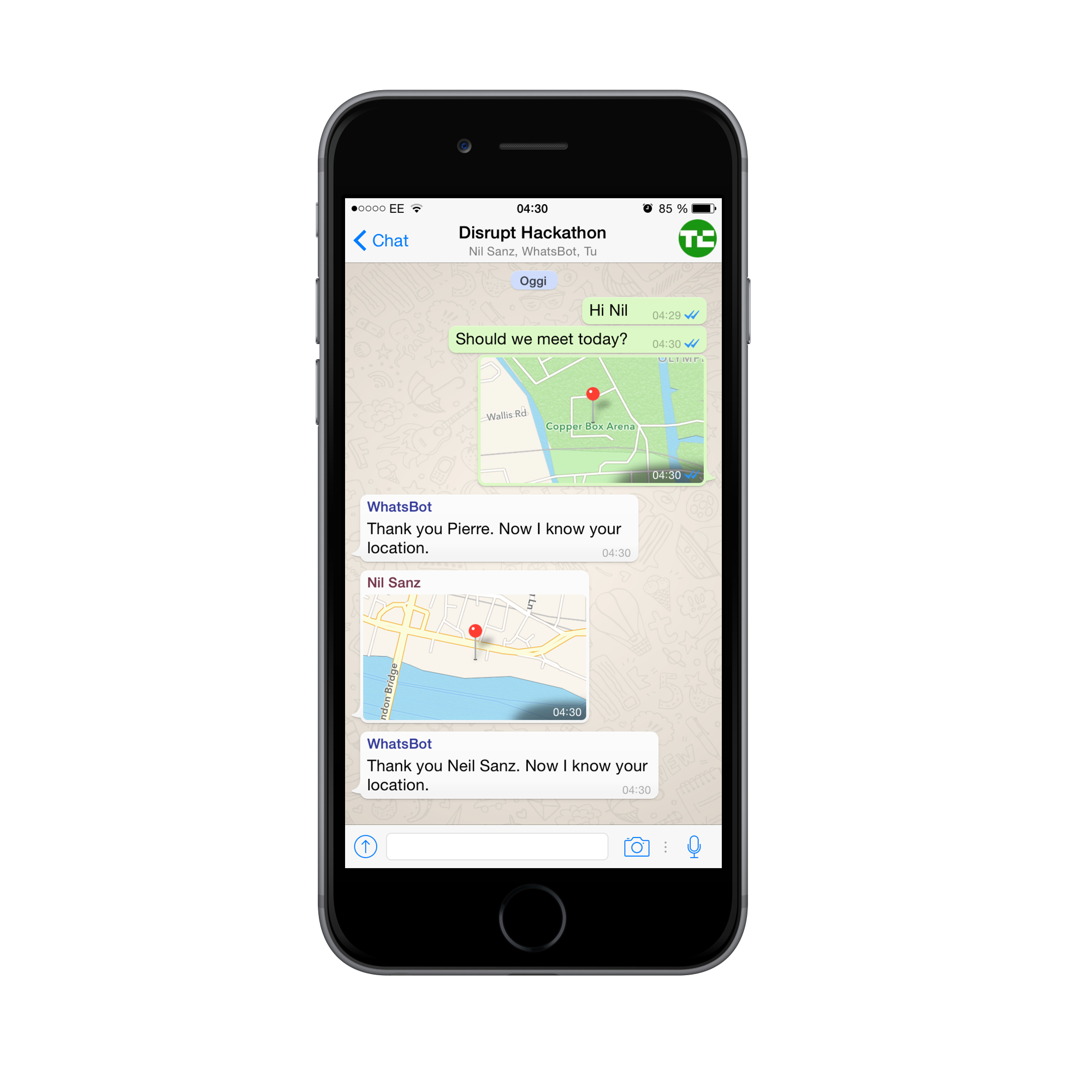 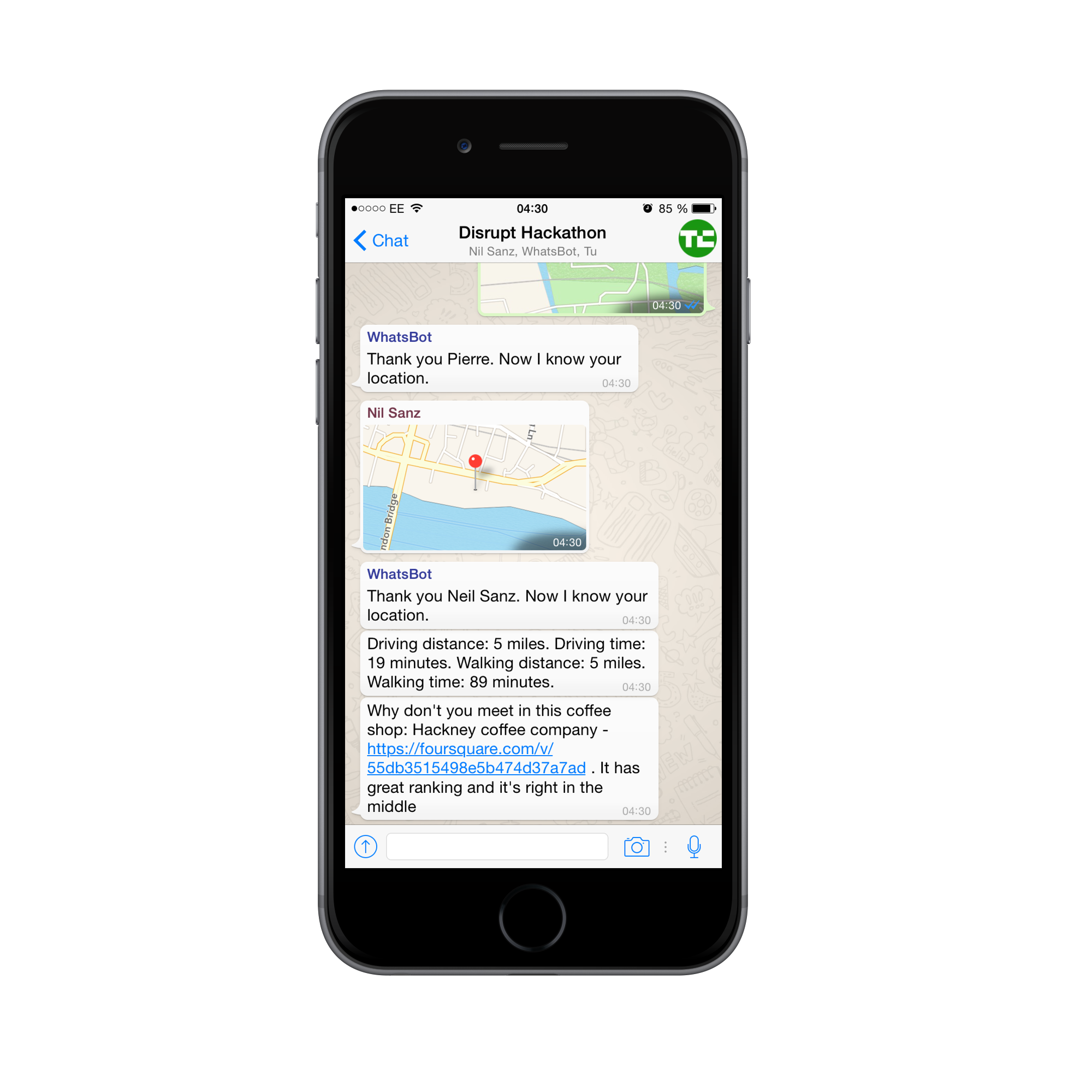 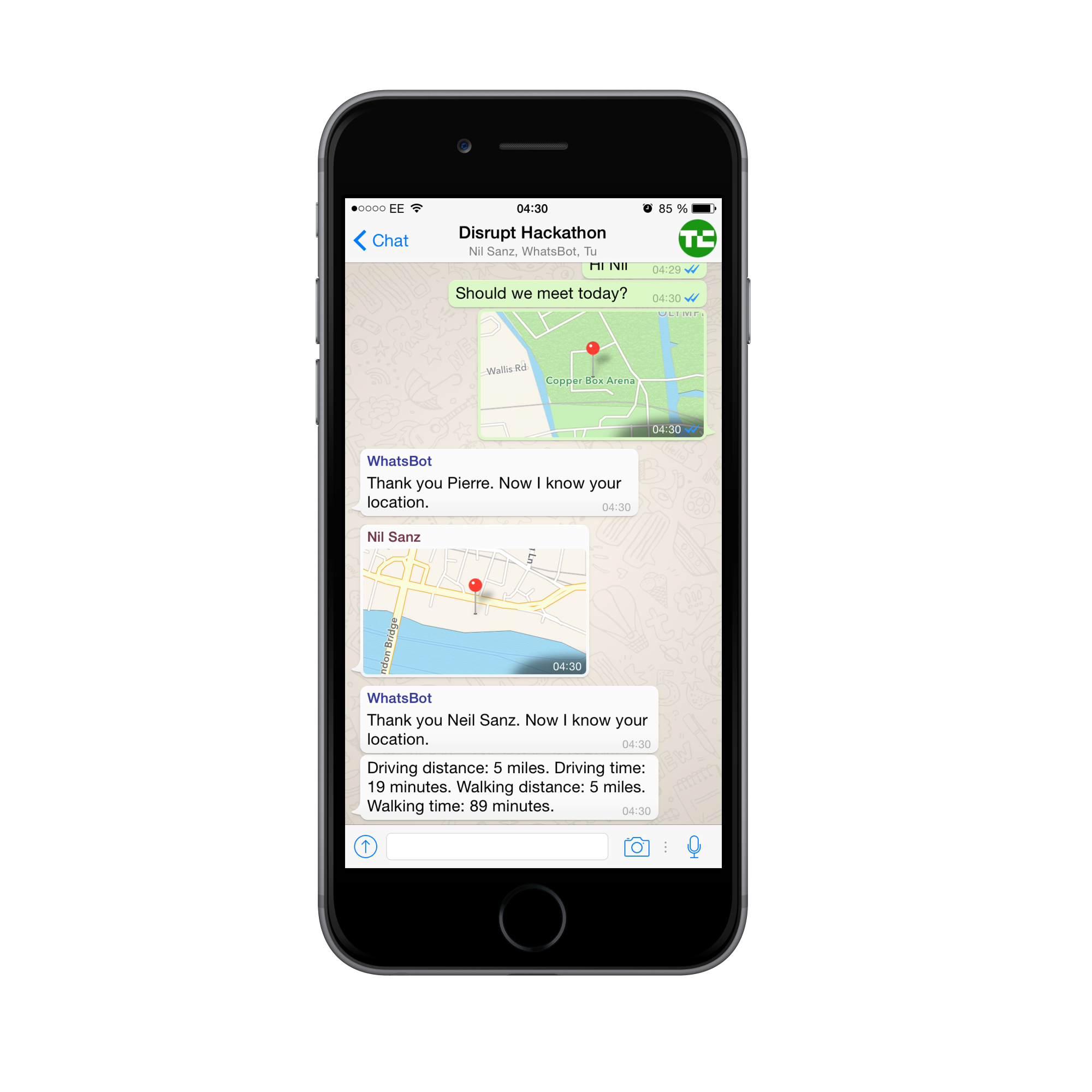 “We spend so much time on WhatsApp, we thought it would be cool to have more services [in the app],” explains Becerril. The founders themselves are highly mobile, moving around from city to city, he says, which means they use WhatsApp all the time. The app helps them stay in touch with those they’re working with, as well as people in other cities, Becerril says.

The concept had additional appeal as WhatsBot’s creators had already been interested in solving challenges around location. In fact, they previously created a travel app for long distance couples called Seeusoon, which was the second runner up at last year’s Hackathon.

Becerril says he and Sanz are continuing to develop Seeusoon, and are now working on the service full-time.

While WhatsBot today is limited to sourcing meeting spots for those in group chats, the creators did add a fun little feature, too. WhatsBot will react to cursing within the WhatsApp chat with various admonishments. For example, it might tell you “yeah, hackathons can be really exhausting,” or, “Sorry, but I need to report that to your parents.” In some cases, it even draws a teddy bear as ASCII art.

While the team has dubbed WhatsBot the first A.I. for WhatsApp, it’s really more of a bot. And there are already several bots built for use in WhatsApp, like WhatsApp Robot, WhatsHash, and another also called WhatsBot, to name a few. But with WhatsApp’s massive footprint, and the rise of app-less virtual assistants, like Facebook’s M which lives in Messenger, the idea to include more functionality in WhatsApp via bots makes sense.

Comments to WhatsBot Brings A Virtual Assistant To WhatsApp