There’s finally a DJI Phantom drone that can follow you 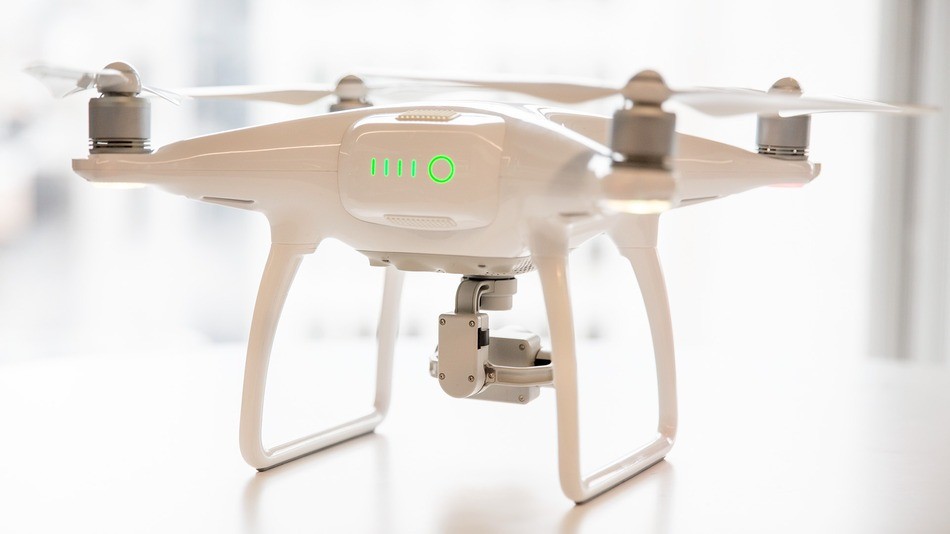 The Phantom 4 is DJI’s most advanced “prosumer” drone ever, and it looks pretty sharp, too.

One of the most popular drone manufacturers in the world, DJI had a big hit with last year’sPhantom 3. This time, it’s taken that design and improved upon it in meaningful ways while maintaining the familiar Phantom look and feel. The result is a potentially faster, more stable flier with a level of intelligence that outstrips virtually all other consumer drones on the market.

There’s no mistaking the Phantom 4 for anything other than a DJI drone, but closer inspection reveals a far more polished look with lots of technology embedded in the body (as opposed to hanging off it). The biggest advancements are the Phantom 4’s follow and avoid capabilities. They’re enabled by a companion iOS/Android app but are powered by two monochrome cameras embedded in the drone’s struts.

This is in contrast to the Firefly, Intel’s obstacle-avoiding drone, which uses RealSense infrared cameras to paint a complex 3D map of its surroundings. 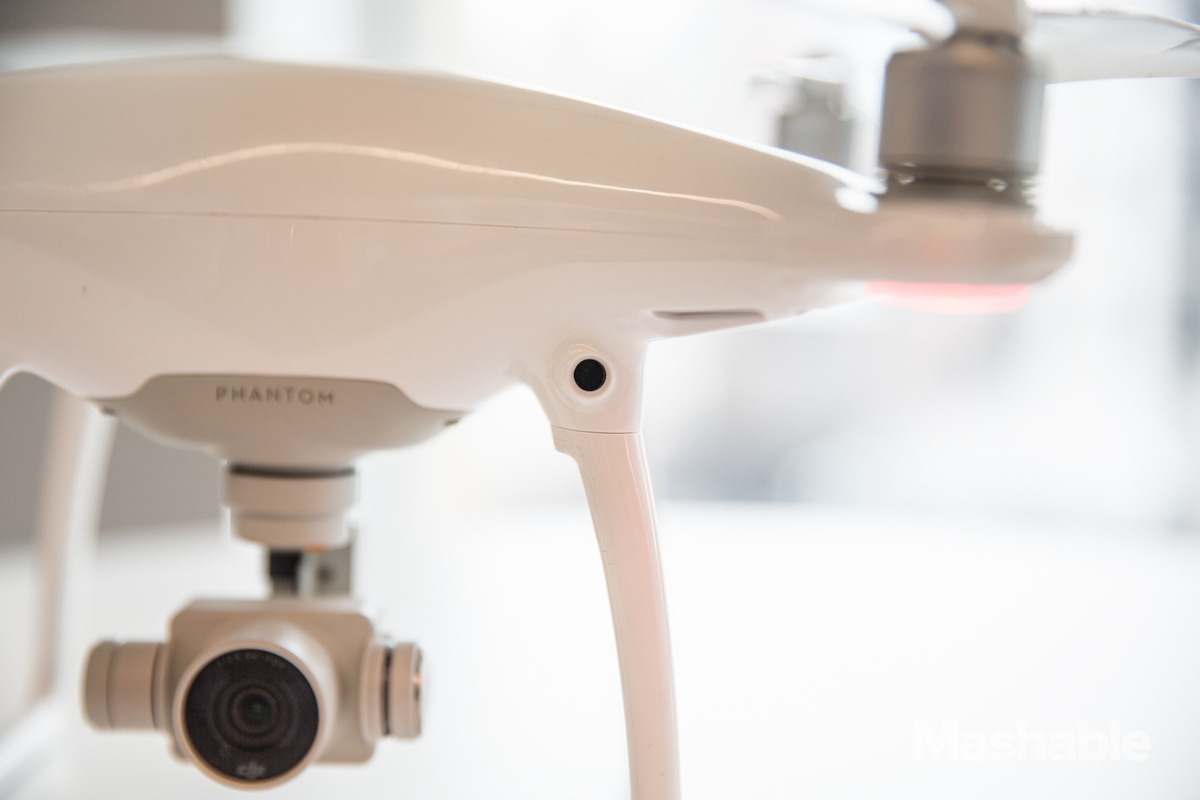 One of the Dji Phantom 4’s new object-detecting cameras

The DJI Phantom 4’s small cameras build a basic 3D image and allow the drone to identify oncoming obstacles and avoid them. In autonomous mode, the Phantom 4 will try to rise up and over the obstacle. In controlled mode, it will come to a halt in front of a wall or person.

DJI reps told me that all five of the drone’s onboard cameras work together so it’s not just looking at images — it’s processing things algorithmically and making decisions based on it. They liken it to machine learning, though it’s not clear that the drone gets any smarter over time. 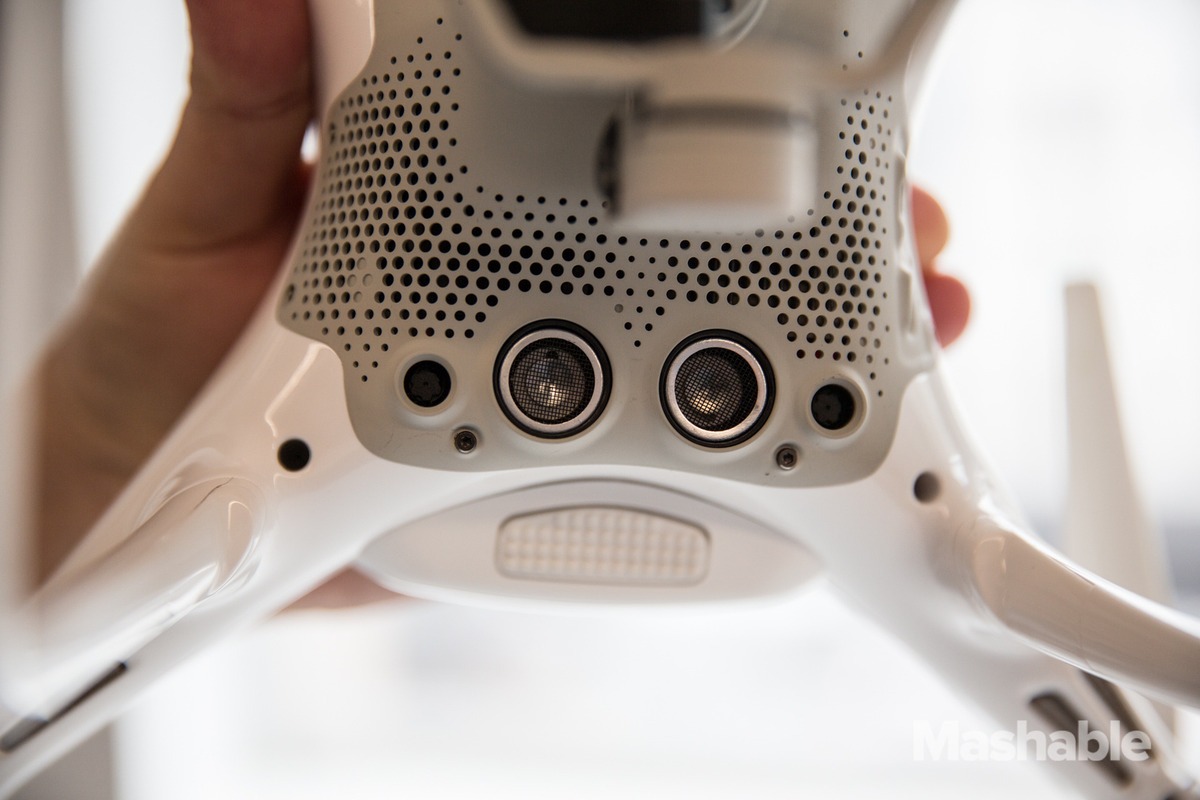 Dji Phantom 4 base shows off its pair of stabilization cameras.

The same cameras, which have a 60-degree-wide field of view (30 degrees vertical), work with the onboard 4K gimbal camera and the DJI flight app to identify people and follow them. DJI calls the new mode ActiveTrack — you can tap on the person in the app and the Phantom 4 will work to keep them in the center of its frame.

Since the two cameras are building a 3D image, you can also draw around, say, a person on her bike and the Phantom 4 will identify the pair as a unit and recognize the person on her bike from all sides. In fact, it’s possible with the app to have the drone both follow and circle a target. Some might find this creepy.

DJI still uses its own camera (not a GoPro), which records at up to 4K resolution to a microSD card in the drone body, but it’s upgraded the software to improve image quality. It now creates images and video with, they claim, better edge sharpness and less chromatic aberration, which means it should produce better shots when pointing toward the sun. The captured video is now certified to work in Apple’s iMovie on iOS and OS X. 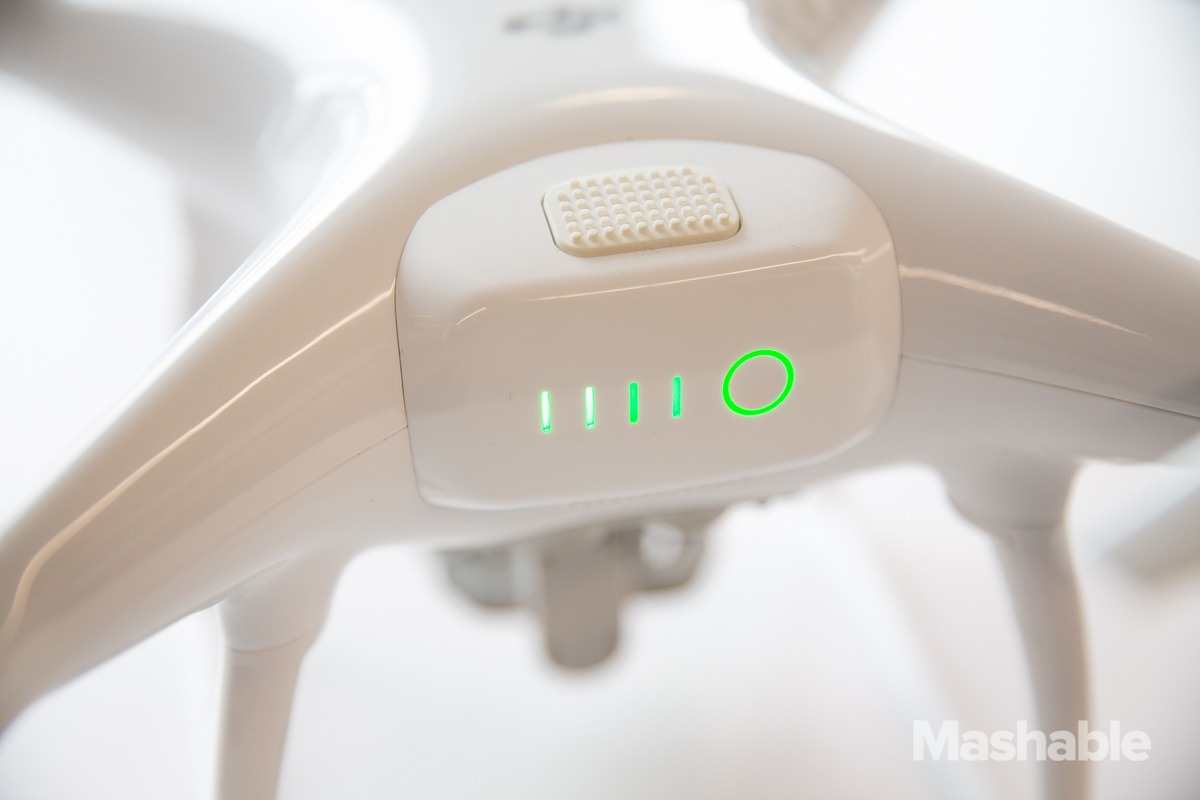 Dji Phantom 4 has a bigger battery than the Phantom 3 Standard.

DJI has redesigned a lot of the hardware in the Phantom 4. The battery, for example, is now a larger four-cell rechargeable that, according to the company, will provide 28 minutes of flight time. It goes that long through a combination of greater battery capacity and a redesigned chassis. The camera, for instance, now has some of its technology housed inside the drone body, reducing the size of the actual lens unit hanging from the bottom and bringing it closer to the main body. 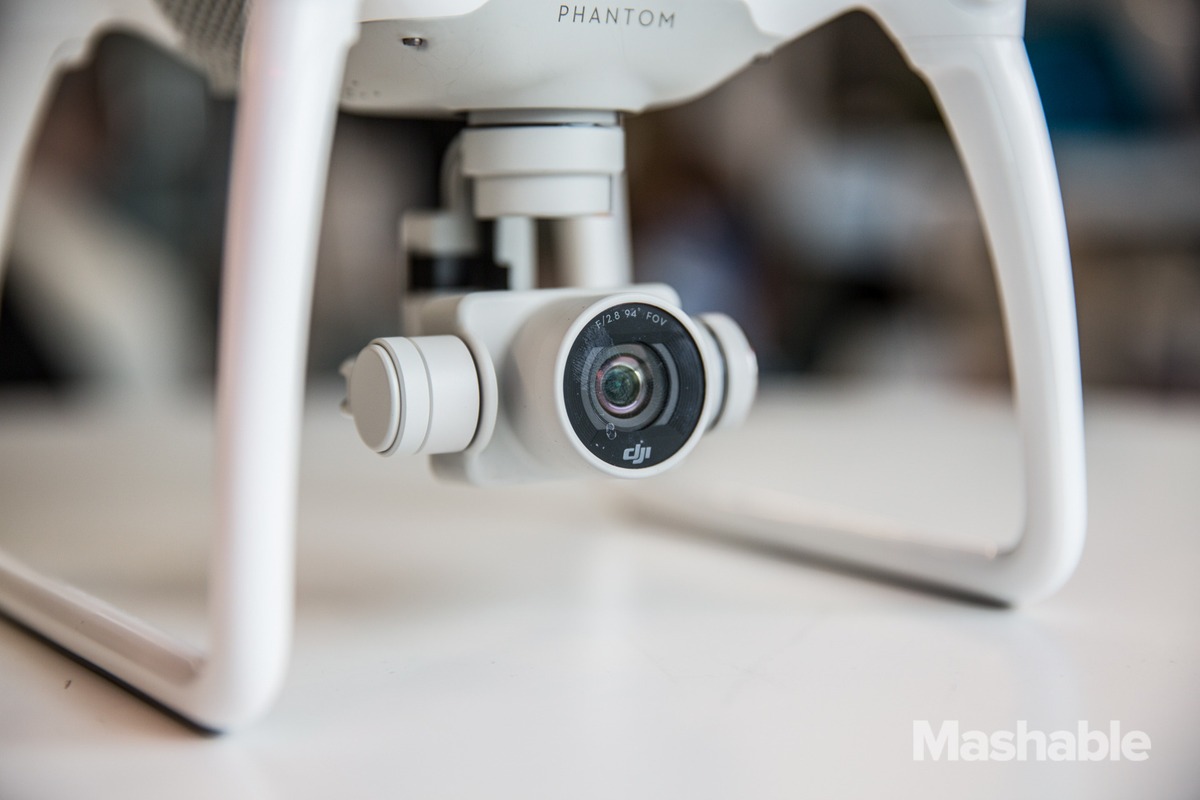 All these changes also help the Phantom 4 rev up to an impressive 45 miles an hour. Even with all the physical changes, DJI reps a big factor is better flight intelligence: The drone can automatically tilt to make itself more aerodynamic during flight.

The other highlight is a new TapFly mode where you tap locations on the screen, and the Phantom 4 takes the shortest distance to them, while avoiding obstacles. In the meantime, you can control the camera and even add new tap destinations while the drone flies.

At $1,399, the Phantom 4 is considerably more expensive than the Phantom 3 Standard I tested last year. DJI, though, considers the new drone a “crossover” device, meaning it sits between consumer and professional drone flight. As such, it offers the flier more control, but doesn’t require it. For instance, obstacle avoidance is not turned on by default. 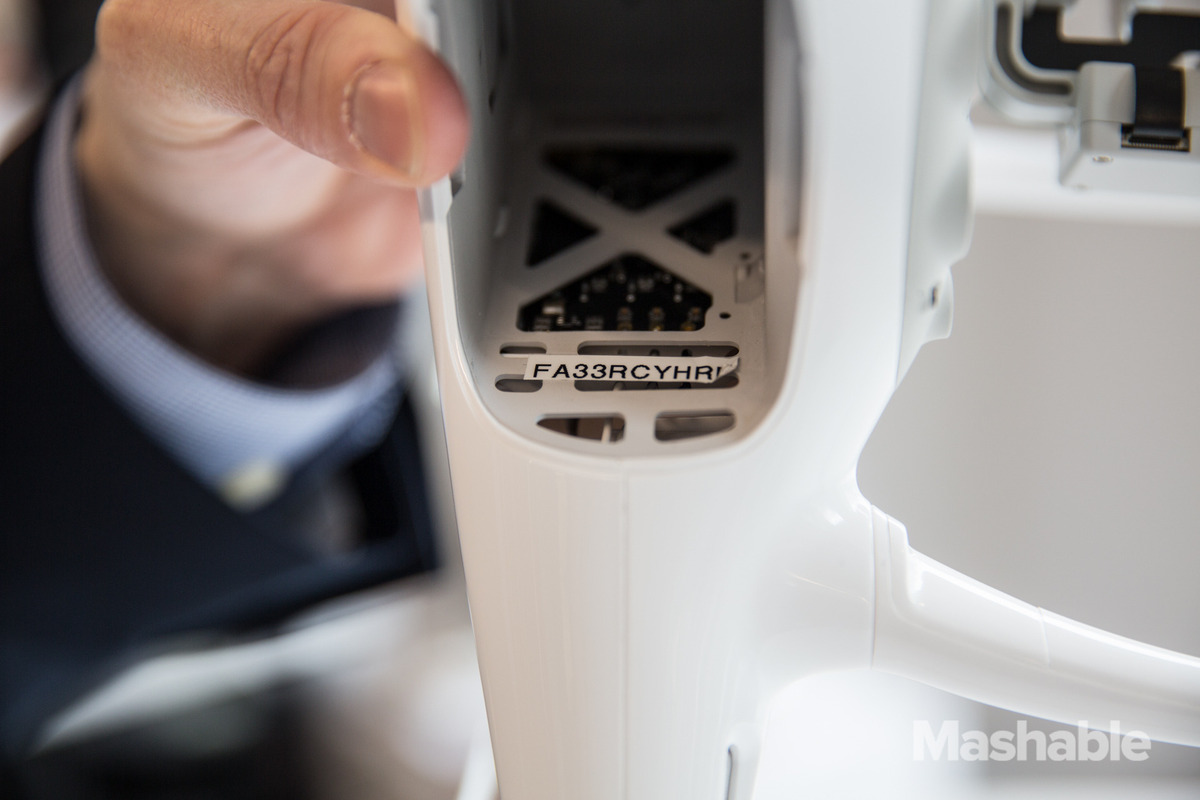 Inside the battery compartment is this drone’s FAA registration number. Don’t forget to get yours.

The Phantom 4 I saw also had a little something extra inside the battery housing: a registration number. That’s right, this is DJI’s first new drone since the FAA implemented its drone registration program. The company offers lots of guidance in the packaging about what to do before you fly, and the setup package has prominent links to the FAA website, but it will still be up to you to do the legwork and get it registered before you fly in an open — and legal — flight zone.

Dji.com and Apple.com (!) are accepting preorders for the Phantom 4 now. Those ordering though Apple will actually get their drones first. The drone will even be featured in Apple stores.

Is the Phantom 4 as good a flier as DJI promises? We’ll let you know as soon as we get a review unit. And register it, of course.

Related  BlackBerry Priv with Android: All the news and rumors