This Maserati-powered, 470 HP, 4-wheel motorcycle would make even Batman jealous 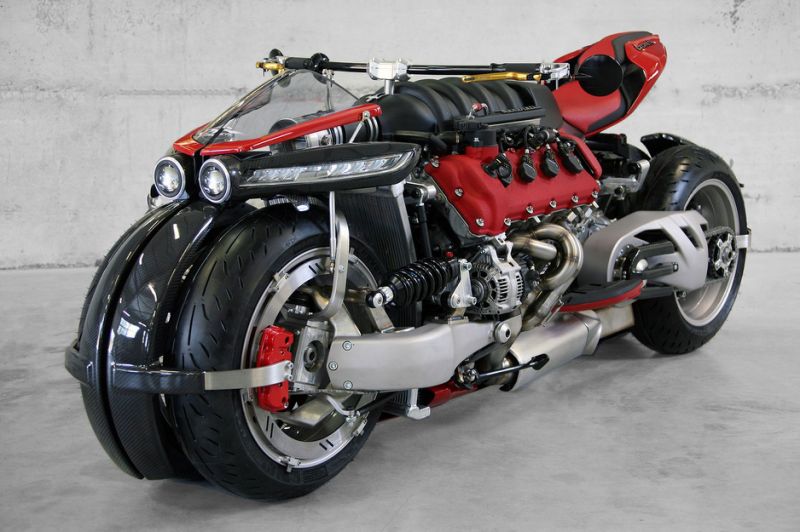 The most powerful production motorcycle you can buy today is the Kawasaki H2, with 210 horsepower and a top speed of 200 mph (or 310 horsepower in track-only H2R spec). With the average motorcycle churning up less than half those amounts of grunt, you’d be nothing short of a mentally unstable individual to call such a bike “tame.”

And yet here we are, looking at what Worthly calls, “the craziest motorcycle out there.” I’d have to agree, and here’s why. The Ludovic Lazareth LM847 forgoes the one-, two-, three-, or four-cylinder motors commonly found in motor bikes and jumps straight to a Maserati-sourced 4.7-liter V8.

Now if that setup and indeed its four-wheeled look strikes you as familiar, you’re most likely recalling Dodge’s Tomahawk, a V10-powered creation of similarly ludicrous origins.

In the case of the LM847, there’s 470 horsepower at the operator’s disposal, and a completely carbon-fiber, aluminum, and glass body to wield that output. Thanks to the quad-wheel design, the LM847 can lean into turns up to 30 degrees, completely changing a standard motorcycle’s handling characteristics.

You might imagine the Fresh bespoke motorcycle manufacturer created such a thing for its performance potential, but in fact, Lazareth says it chose the Maserati engine simply because it looks cool. I suppose if you owned your own coach-building enterprise, your inspiration could come from anywhere, with no one to stop you.

Beyond the ludicrous motor, the LM847 forgoes a standard transmission in lieu of a single-speed chain gearbox, which means all you really have to do is hold on. Top speed hasn’t been announced but if the Tomahawk’s 200-plus-mph figure is any indicator, the LM847 should be in the same ballpark.

Related  Audi will use headlight lasers to protect pedestrians