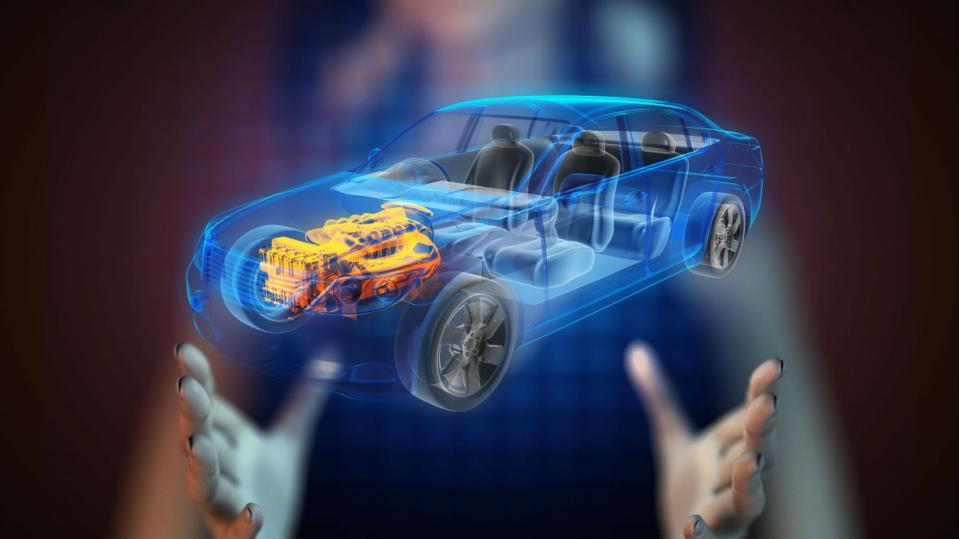 Despite what your eyes might lead you to believe, most of the “holograms” you’ve seen rely on optical illusions instead of real holographic technology. For example, the “hologram” of Tupac that appeared at Coachella in 2012 was just a two-dimensional image projection. It relied on a 19th century optical illusion called Pepper’s Ghost that makes use of glass mirrors and a bit of stage magic. Researchers have been working on true holographic imaging for years, but this week a Korean research team actually made it happen and produced the world’s first 360-degree color hologram. The tabletop holographic display can be viewed all the way around in full color, and the view changes from every angle. It may seem simple, but the ability to project a fully 3D hologram that can be viewed just like a real object is something that wasn’t possible until now. The 3-inch hologram is projected within the tabletop display unit thanks to a series of high-powered multicolor lasers. The floating image relies on diffraction generated by the interference between the many lasers in the complex system. Although it’s a simple image of a Rubik’s Cube, the floating hologram can be seen from any angle, 360 degrees around. A previous holographic invention out of MIT had a visible radian of 20 degrees, which isn’t exactly a proper hologram but was as close as most technologists could get. Related: Whitney Houston ‘hologram’ to embark on a world tour in 2016 The hologram development comes out of a collaboration between 16 different researchers, development groups, and financial backers. The research has been ongoing since 2013, when Giga KOREA announced the Digital Holographic Tabletop Terminal Technology Development project. Their ultimate goal is to implement a ten-inch holographic television set by 2021, and the Electronic and Telecommunications Research Institute (ETRI) has been leading the holo-tech charge ever since. A holographic television may still be far off, but developments in realistic hologram technology could make a big change in fields from visual communications to the arts. Of course, the ETRI still has work to do to perfect the technology. They’ll need to be able to visualize more complex images in three dimensional, 360-degrees displays, for one. According to the ETRI team, technology to develop, send, and receive these kinds of holograms over a 5G network is already underway.

ETRI (Electronics and Telecommunications Research Institute) made an announcement on the 2nd that it has developed a technology that implements 3D hologram image in red, green, and yellow color on top of tabletop-type digital display system.
Total of 16 businesses and organizations such as LG Display, Silicon Works, Yunam Optics, A Optics, Korea University, Kyungpook National University and others participated in this research.
Research team succeeded in floating rubric cube image, which is in a regular hexahedron form, with a size of 3-inch (7.62 cm) on top of tabletop-type display system, and this image can be seen anywhere from 360°. 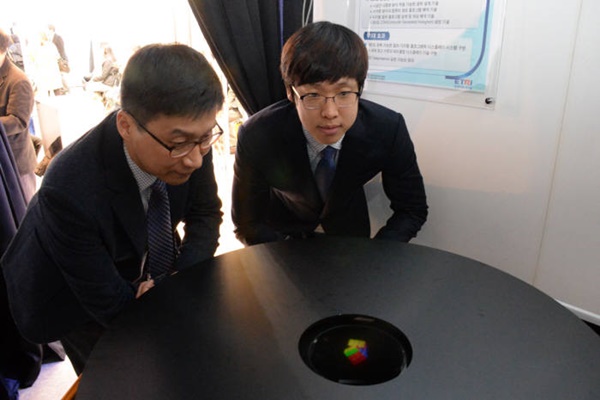 In the past, MIT showed hologram technology with a size of 3.5 x 2.5 cm and radian of 20°. Japan’s NICT (National Institute of Information and Communications Technology) was only able to implement a hologram with a size of 6-inch within viewing angle of 6-10°.
ETRI used diffraction phenomena where light bends due to implementation of hologram and interference where 2 lights come together and make a different color.
Some of Pseudo Holograms that make 3D effects through 2D images are currently out in markets. 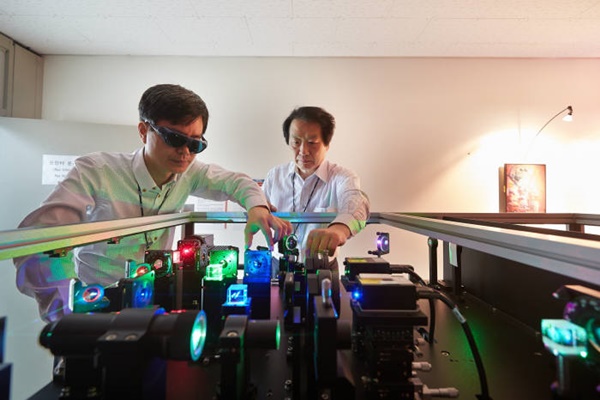 ETRI succeeded in developing a hologram that can implement colors from 360°. Research team is arranging optic axis of holographic printer.

Research team is planning to develop system minimization technology, improve quality of image, and increase size of image for next 5 years hereafter. It is also planning to develop a technology that sends and receives actual holograms through 5G network.
This research is part of Giga KOREA Project ‘Digital Holographic Tabletop Terminal Technology Development’ that began in 2013.
“We are currently working on R&D with a goal of implementing 10-inch Holo TV by 2021 when Giga KOREA Project ends.” said Choo Hyun Gon who is the head of ETRI Digital Holography Institute.
“This is a new attempt to overcome technical limitations that current methods have.” said Kim Jin Woong who is the manager of ETRI Broadcast Communication Media Laboratory. “It is meaningful that we greatly made a progress in increasing possibility to implement virtual reality (VR) or holographic broadcasting in the future.”