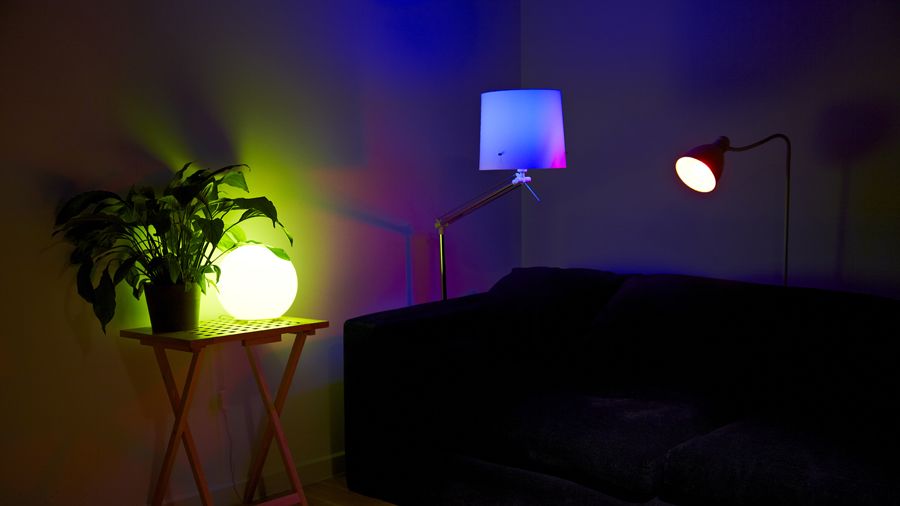 Look, we know that when we first tell you that Philips is trying to sell you some internet-connected lightbulbs that you control from your iPhone for one hundred and eighty quid that you’ll think Philips is mad. Or we’re mad. Or both. And we get you.

It sounds like both a stupid amount of money to spend on lightbulbs, because… They’re lightbulbs, innit? Flick a switch, turn ’em on; flick it the other way, turn ’em off.

And despite all the caveats, we can’t deny that we’re charmed by them, and it’s possible that we won’t be able to resist buying a set.

A starter set comes with three bulbs and a base station for the aforementioned one hundred and eighty quid. You can subsequently add up to 50 single bulbs for £50 a pop, but you need the starter set first, so that you have the bridge that joins the bulbs to your network.

The bridge is a big puck around the size of a hamburger. You connect it using Ethernet to your router – yes, Ethernet rather than Wi-Fi – and plug it into the mains.

It communicates with the bulbs – screw-fit only at the moment, not bayonet, though you can buy adapters on the high street – using its own RF (radio frequency) system, but of course even though you’ve plugged the bridge into your network using Ethernet, now that it’s part of your network, you can connect to it however you please, including from your iPhone, iPad or iPodtouch through Wi-Fi. (Indeed, you can connect over the internet from the other side of the planet if you set up an account, which is fun.)

Pairing is easy. Download the free app, press a button on the bridge, and you’re done. Now the fun begins.

Not only can you change the brightness of each bulb individually, but you can also change its colour. The bulbs are LEDs, and you can adjust the red, green and blue values of each. The app by default has a number of light recipes: there are slightly wacky ones that create colourful scenes, as well as pleasant presets such as ‘Energize’ and ‘Reading’ that set the brightness and offwhite colour for the bulbs.

You can look at a colour spectrum, drag each bulb onto it to set its hue and brightness, and then set this as your own preset. You can even take photos or load one in from your library and sample colours from it for each of your bulbs, then save that as a preset scene.

The colours are generally good, though there are limitations – no browns or blacks, of course, and the greens are distinctly anaemic. You can set timers to switch a scene on and off immediately or on a three-minute or nine-minute fader, though we’d like to see a kind of semi-random switch on/off to act as a burglar deterrent. And should you add lots of lightbulbs, there’s currently no easy way to control ‘zones’ of them.

There’s no escaping the fact that this is an intimidatingly expensive system, and though the LED bulbs’ energy efficiency means running costs are good, they’re only rated for about 15,000 hours of use.

Note, too, that at 600 lumens, each bulb is definitely ‘mood lighting’; they can’t replace main overhead lights for most rooms.

Availability is currently a bit all over the place if you do want some, and even though they’re not five stars, we still think these are worth buying, if imperfect.