Fashion tech: 20 wearables that are more chic than geek 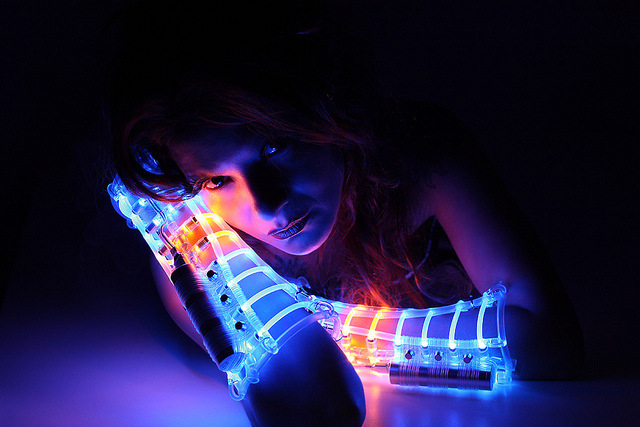 The old wearable tech ‘look’ is dead, but fashion tech is here to stay. Gone are the bulky, black plastic smartwatches and in their place are fashionable accessories in a range of sizes, styles and finishes. Screens, no screens, leather, semi-precious stones, 18k gold, nothing is too much for this new batch of stylish wearable technology.

So without further ado, here’s our top wearable picks for tech-loving fashionistas and style-conscious men. 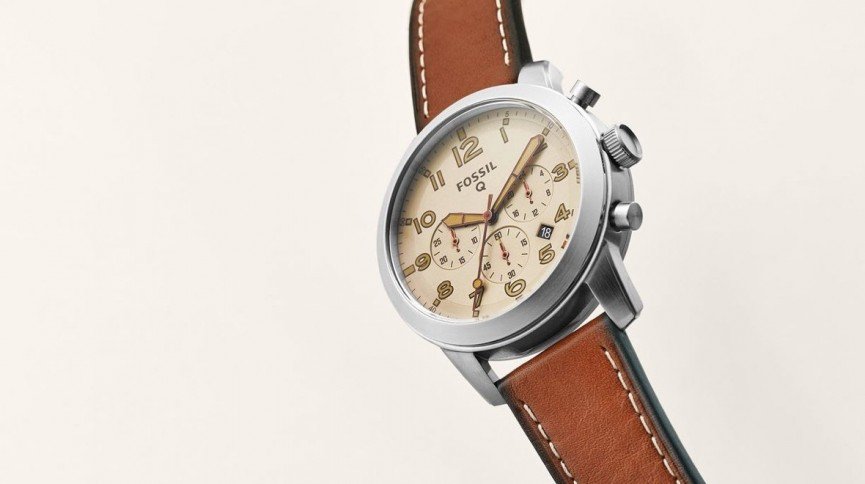 Fossil is going after the fashion crowd with the Fossil Q Founder, an Android Wear watch, a non-digital display watch, the Q Grant, and sleek Q Dreamerand Q Reveler smart bands aimed at men and women. We’re fans of the understated luxe of all of the pieces, especially considering the very reasonable prices.

The accessories are all now on sale and they have just been joined by the Q54 Pilot smartwatch, inspired by vintage aviation. The new addition tracks activity and handles alerts from up to 50 apps, now including Misfit and Tinder. 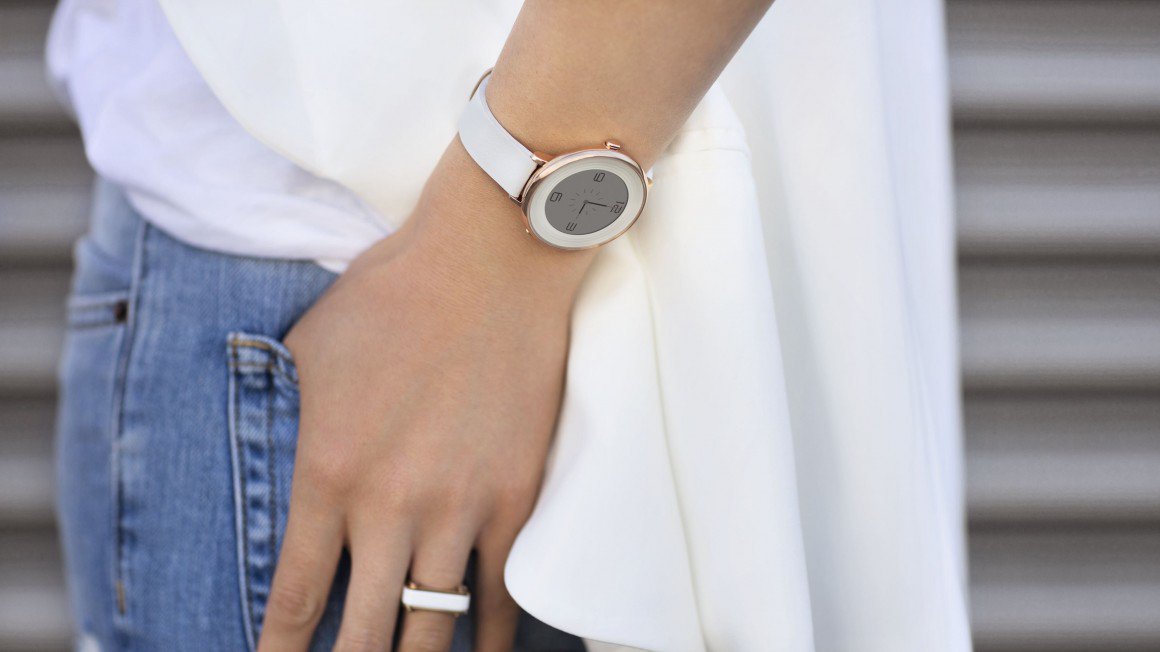 This is the thinnest, lightest smartwatch we’ve seen yet. Dainty even. ThePebble Time Round is just 7.5mm thick in fact when most smartwatches are more like 10 – 11mm.

There are 14mm and 20mm band widths plus black, silver and rose gold finishes to choose from. It runs Pebble’s own OS, which does have less third party apps than the big platforms, but it does have some nifty features like Timeline and now its own Health platform. So how is it so compact? It uses a colour e-paper display and a tiny battery which means it lasts just two days when normal Pebble watches last 7 or even 10 days. 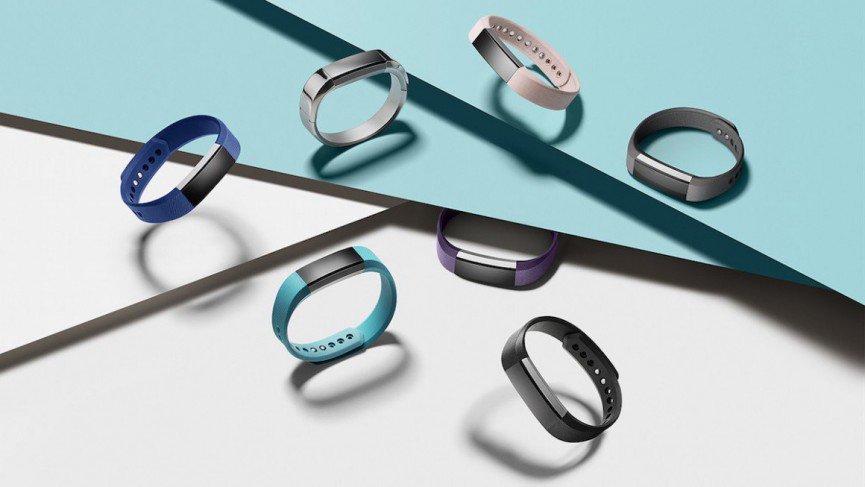 This will sell a ton. It may have last year’s sensors and activity tracking features – aside from letting you set hourly micro goals – but the Alta is all about making fitness trackers stylish.With a small OLED screen, the Luxe models include pink leather, graphite leather and stainless steel plus Tory Burch Alta bands are coming soon, hopefully similar to the lovely Flex accessories we’ve seen before.

We also especially like the look of the upcoming, skeleton metal Public School accessories for the Alta which just debuted alongside emoji pins and GIF dresses at New York Fashion Week. 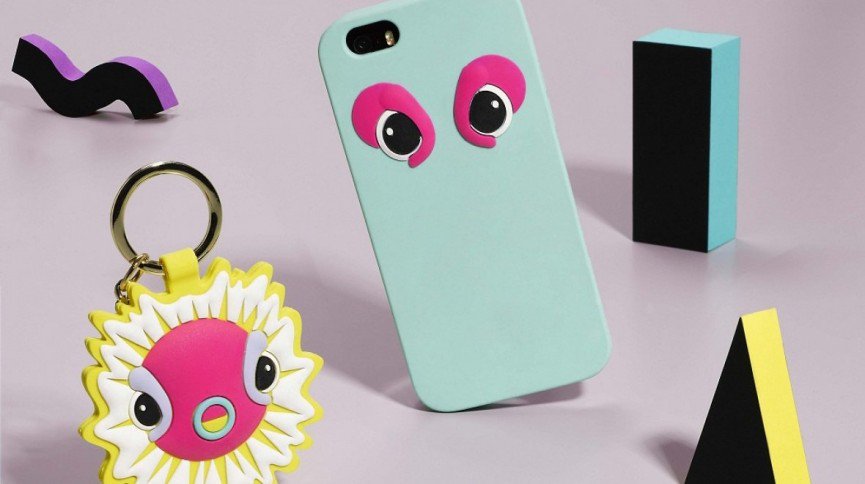 Something a bit different here – Topshop is selling keyrings, stickers, badges, phone cases and bracelets in which to hide a Barclaycard bPay wearable payments chip. The first collection is fun with bold Monster Fish motifs and a luxe metal and snake design is also planned. 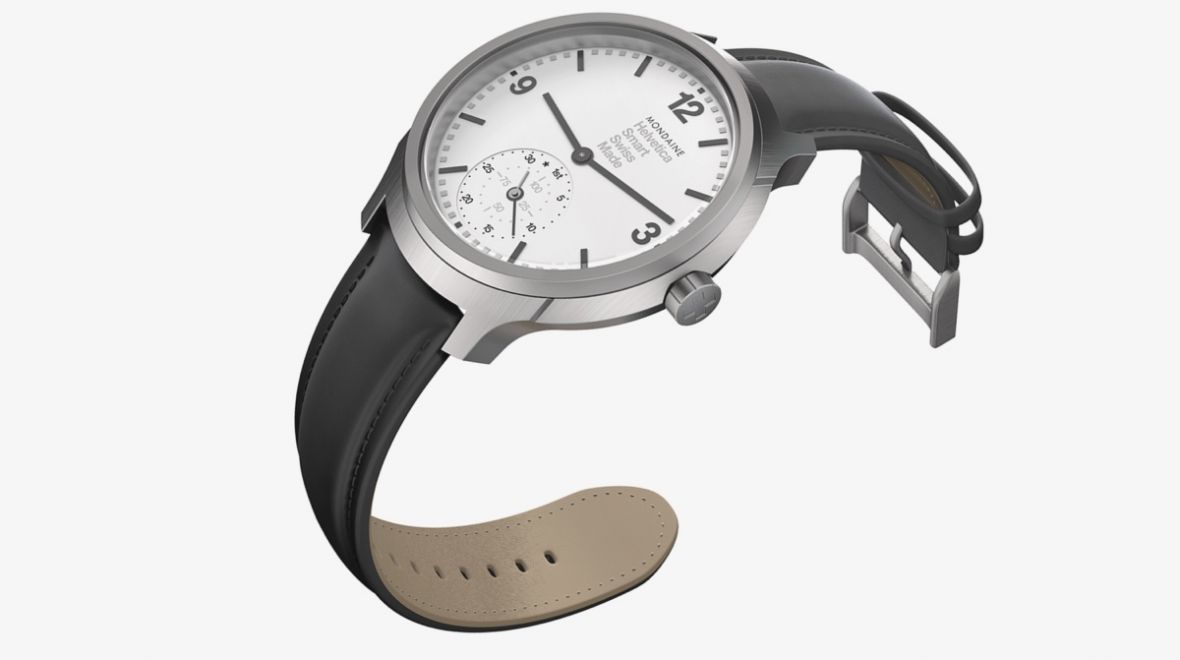 One of the most stylish wearables to grace the wrists of our editors, Mondaine’s first smartwatch does a flawless job of disguising itself as a analogue wristwatch.

As Editor-in-Chief Paul Lamkin gushed in his in-depth review, “When it comes to design chops, Mondaine watches rule. Firstly, it has got the whole Swiss railway design going on, which is like having your smartwatch endorsed by time itself and, if that wasn’t enough, the company has officially licensed the Helvetica font, which is enough to get the most ardent design nerds aquiver.” 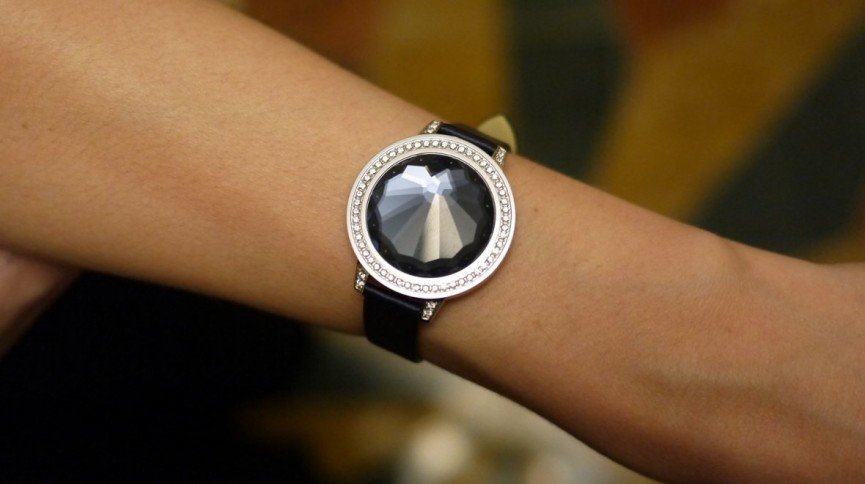 We generally shy away from wearables with too much sparkle but we’re making an exception for the upcoming new Swarovski Shine trackers (and the smart bracelets for teens below, Gemio).

The next two colours will arrive in autumn 2016 and a solar powered tracker, which can absorb light for 15-20 minutes and will have a darker crystal, could be launched by Christmas. We’re not surprised the existing Swarovski Shinehas outsold regular jewellery in its stores as it really is hidden tech.

If you like Misfit but you want something a bit quieter, consider the new modular Misfit Ray tracker. 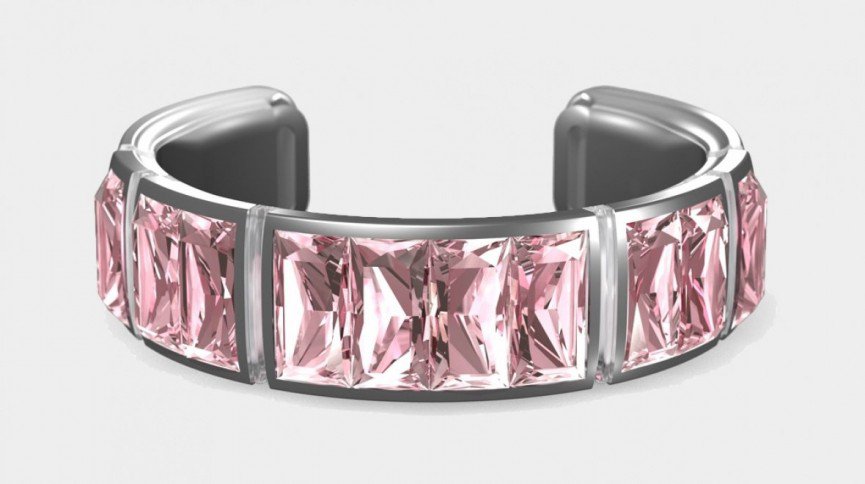 Fashion accessories hold a special magic for teen girls and Gemio is trying to bring tech into that equation. The range of connected friendship bracelets is described as social wearables.

As well as looking funky on wrist, the Bluetooth bangles can let teens know if their friends are nearby (once paired) and send coded light pattern messages from device to device. There’s also detachable gems for customisation. Intelligently simple features and pretty looks should spell success. 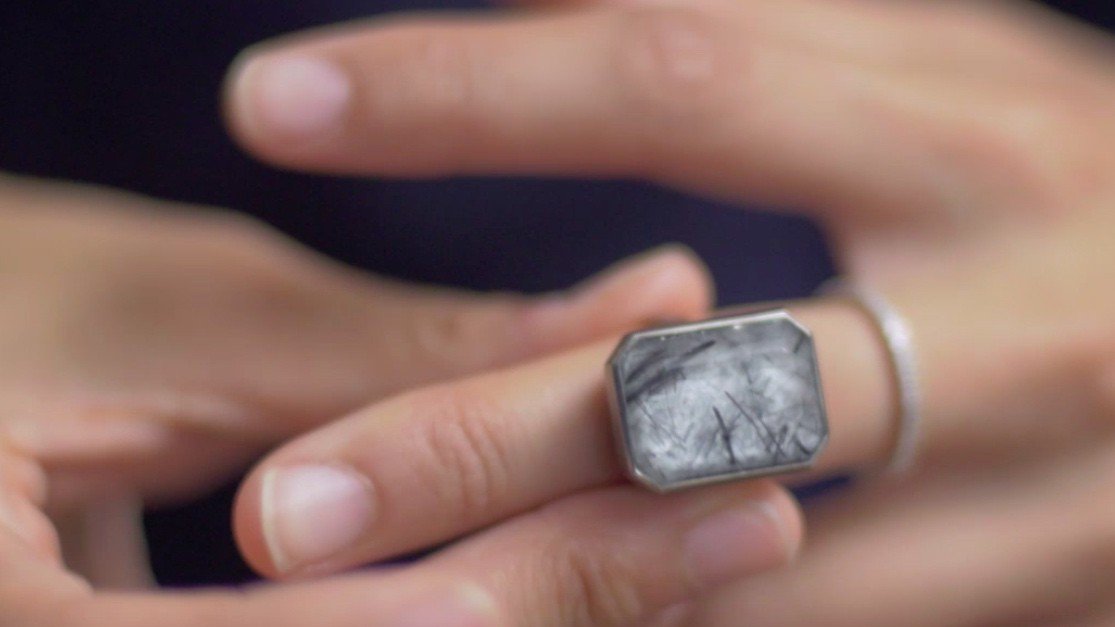 One of the best blends of fashion and tech we’ve seen is Ringly, a ring wearable that matches any outfit. Available in a range of semi-precious stones from Emerald to Sapphire, Ringly syncs with your iOS or Android device to alert you to calls, messages and emails you might miss while you’re phone’s in your bag.

If that’s not enough, it also works with lots of apps, including Facebook, Twitter, Instagram, Snapchats, Vines and naturally Tinder. Plus Ringly is one of a number of wearables that is partnering with MasterCard for contactless payments. Look out for a review of Ringly on Wareable very soon. 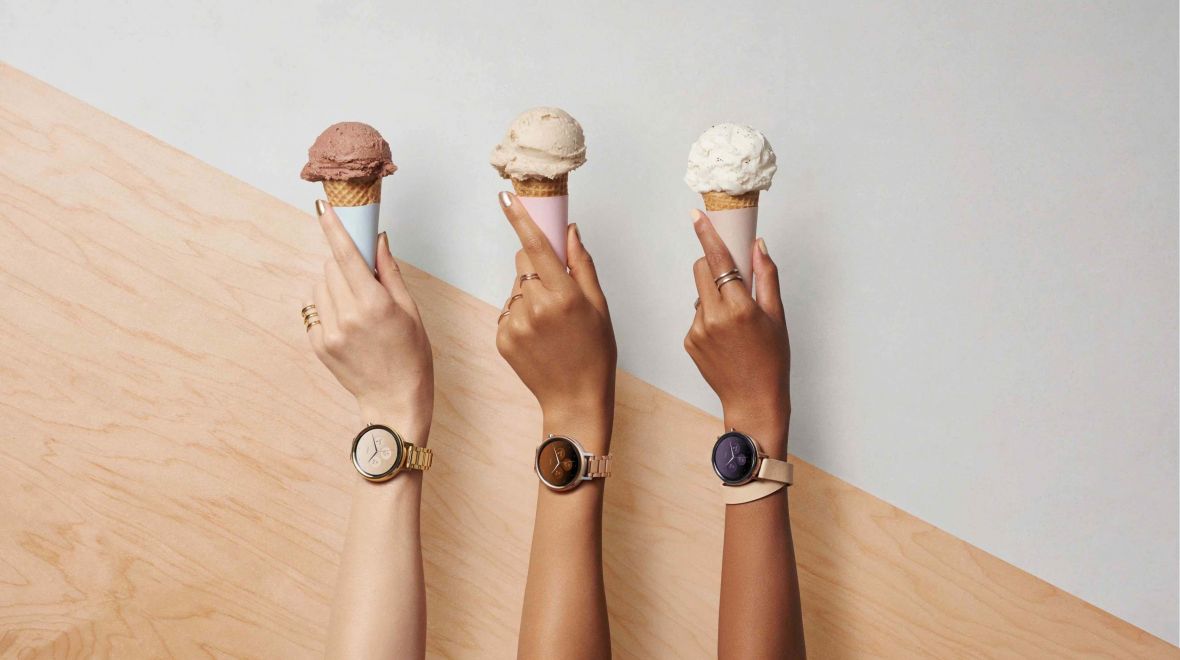 It’s still not quite skinny enough but this is our current top recommendation for ladies looking for a chic, affordable smartwatch. Arguably Motorola has prioritised style and customisation over unique features with the second gen Moto 360 – there isn’t much to separate it from rival Android Wear watches.

It ticks all the style boxes: two sizes at 42mm and 46mm, two sizes of lugs to fit different widths of straps and a range of finishes and customised looks – down to the bezels. If you order online, head to Moto Maker to really personalise your watch but be careful – those designers really know what they’re doing. 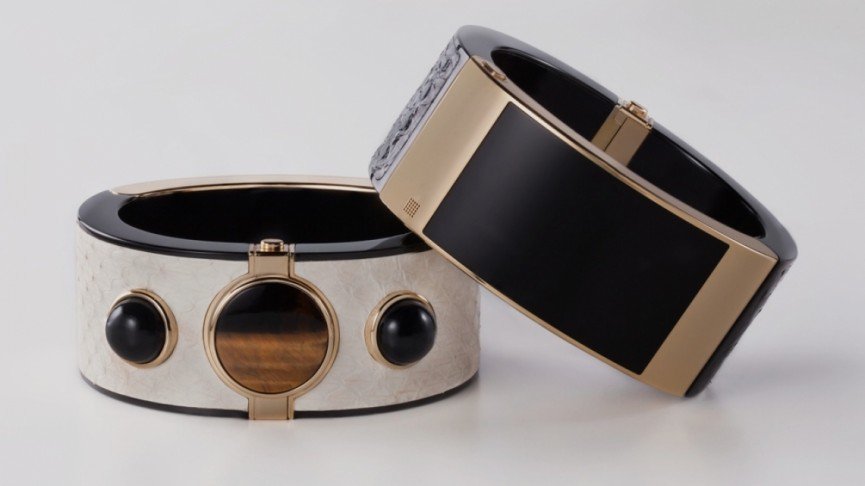 MICA is the luxury bracelet that New York Fashion Week audiences fell for before they even knew it was smart. A collaboration between Opening Ceremony and Intel, the 3G-connected bangle has an inconspicuous 1.6-inch OLED screen on the inside of the accessory to display notifications (even if you leave your phone at home) and a 48 hour battery life.

Up close it’s a stunner: 18k gold details, real snakeskin, pearls and semi-precious stones. It feels expensive. And essentially, if you have the kind of wardrobe that matches a bracelet like this, you can probably afford the premium price tag. 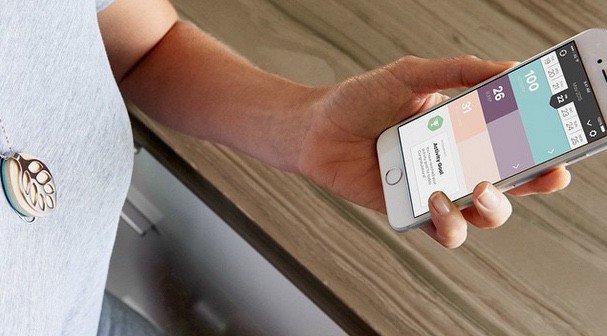 Designed for women, the Bellabeat Leaf can be worn as a necklace or brooch and comes in two styles – the standard design of wood and stainless steel with a silver chain or a limited edition version made from dark marshwood and gold leaf.

The Leaf tracks stress levels, steps, sleep and menstrual cycles and as with most smart jewellery boasts a long battery life – in this case six months. Accessories include leather and vegan fiber straps. 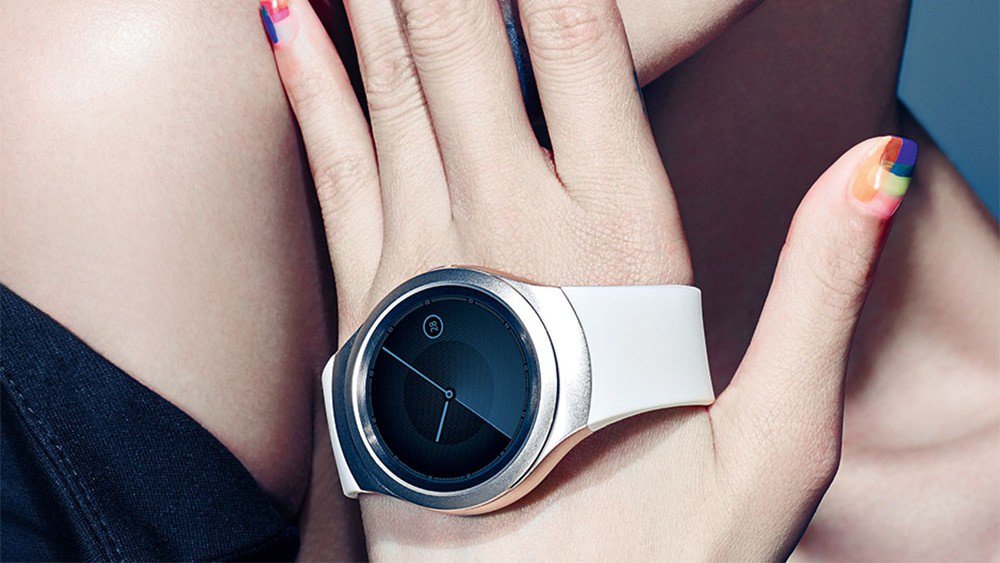 Excuse us while we faint from disbelief that we’re actually including a Samsung product in a list of chic wearables. The Samsung Gear S2 boasts bold, Swatch-esque looks that suits a more casual style while the Classic model, which now comes in 18k rose gold and platinum, looks more like a dress watch. It looks modern yet familiar and compact enough to be unisex. One thing is for sure – it’s a fresh new approach to smartwatches from Samsung. 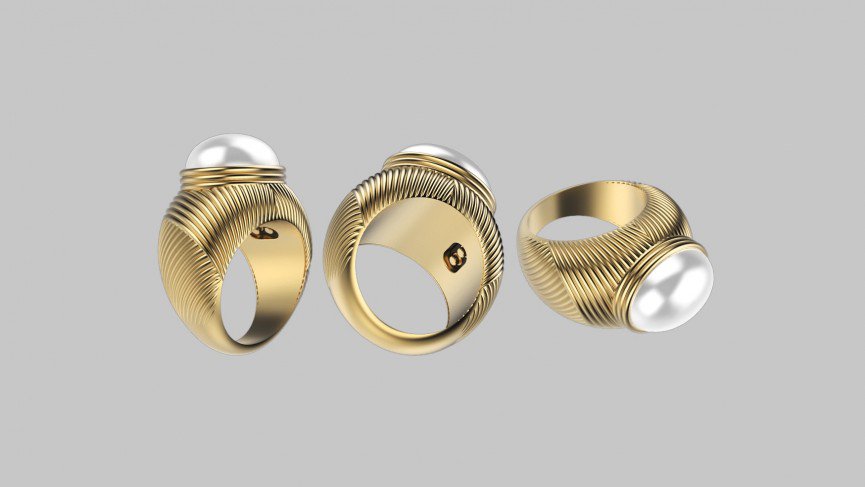 This collaboration between Omate and French fashion house Emanuel Ungaro looks pretty damn close to ‘dumb’ cocktail jewellery. The Ungaro ring will only vibrate (subtly) if a VIP contact – allocated in the companion iPhone app – is contacting you. Kind of like Altruis (below) but even more pared back.

Inspired by Ungaro’s Diva perfume bottle from 1983, the tech isn’t bad either: the battery lasts five days between charges, which is pretty good for smart jewellery.

The ring itself is available in gold or silver and fancy customers can choose the gemstones from blue topaz, opalite, sapphire, onyx and ruby. 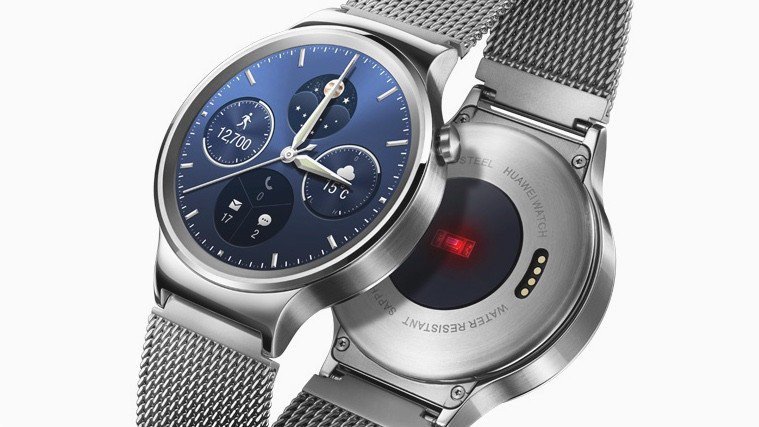 The Huawei Watch is nicely unisex in style – traditional polish meets regular Android Wear alerts. Slick looks do come at a premium though with the luxury, rose gold-plated version, you’ll need to find $799.

The finish is a cut above – the circular AMOLED display is sharper than most and it’s coated in sapphire crystal. The cold-forged stainless steel frame looks and feels premium too. Well worth a look if you don’t mind splurging. 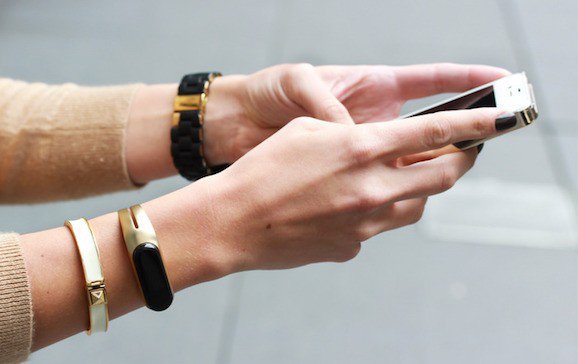 This affordable, fitness tracking bracelet blends in nicely with regular jewellery thanks to jewel tones, a sleek, open design and three different sizes to suit all wrists. The unit itself also pops out to clip onto jackets, belts and pockets and the accompanying iPhone/Android app delivers motivational messages – known as Boosts – throughout the day. It almost goes without saying that it also handles basics like tracking steps, calories, elevation and distance.

Mira is made from stainless steel and is available in five subtle colours with cute names like Hot Chocolate and Polished Rosé All Day plus at CES 2016, Mira unveiled new Vivid Wellness pendant and bracelet styles to the collection.

Related  Are flying cars ever going to take off? 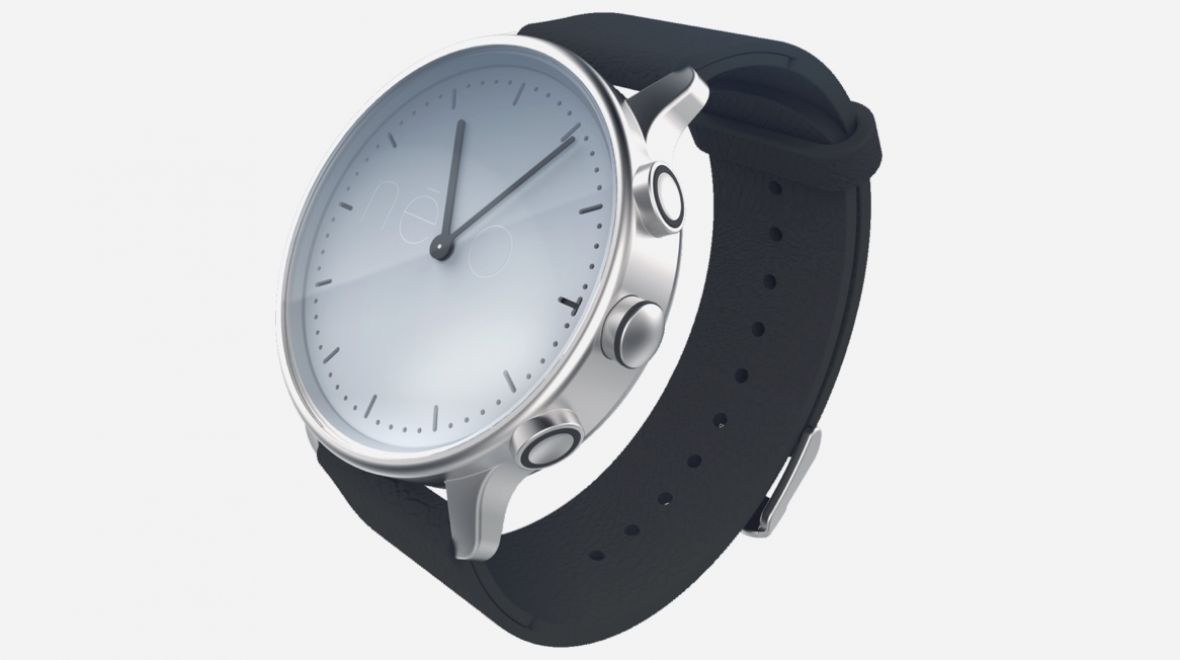 A lot of the smartwatches coming out of Switzerland are eye-wettingly expensive but the Nevo Watch is a nice sub-£250 mid-range option.

It’s made by a French company, with a Swiss movement but assembled in China. The look is seriously minimalist, even more so than the Mondaine Helvetica No.1 Smart. There are three styles to choose from (New York, Shanghai and Paris) and you can barely even see the Nevo branding.

As well as telling the time and alarms, the Nevo watch does notifications and tracks steps via LEDs at the hour nothces but that’s it. 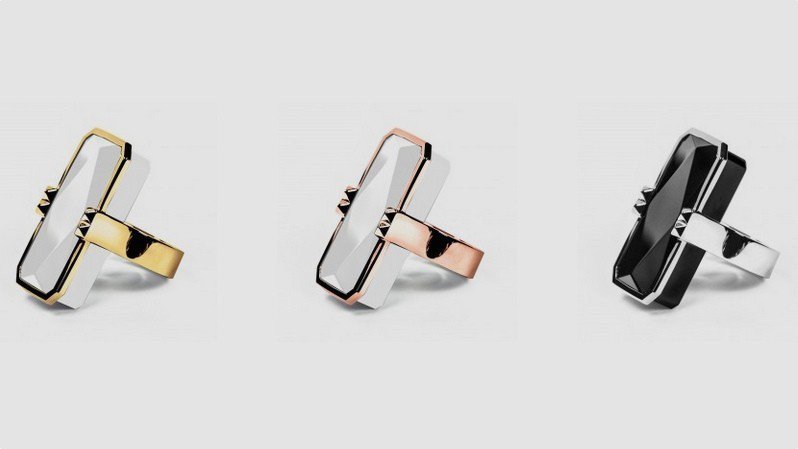 Altruis is a modular ‘modern day pager’ available in ring, necklace and bracelet form. It buzzes you with notifications and encourages you to filter the noise by turning off most app alerts and only allowing messages with predetermined keywords through. It’s also rather pretty.

The stone can be removed, there’s three different ring sizes and the materials for the jewellery portions include gold, rose gold and platinum. A leather wristband for men is planned too. Classy and clever. 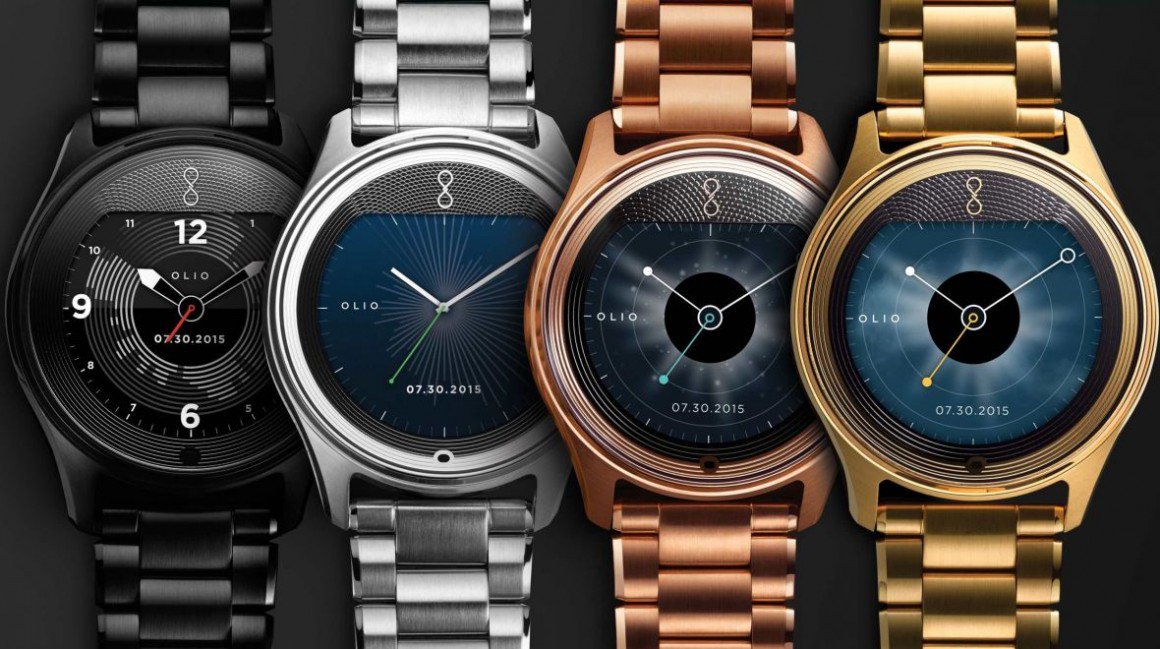 With 24-karat gold and 18-karat rose gold plated models available, the limited edition luxury Model One smartwatch has that oversized boyfriend, Michael Kors look about it. Each watch comes with a bespoke watchface and UI aesthetic as well as Olio Assist, the San Fran company’s own cloud-based assistant. More sizes, styles and materials are expected in 2016. Read our chat with Olio Devices founder Steve Jacobs and watch out for a test of the Model One hitting Wareable soon. 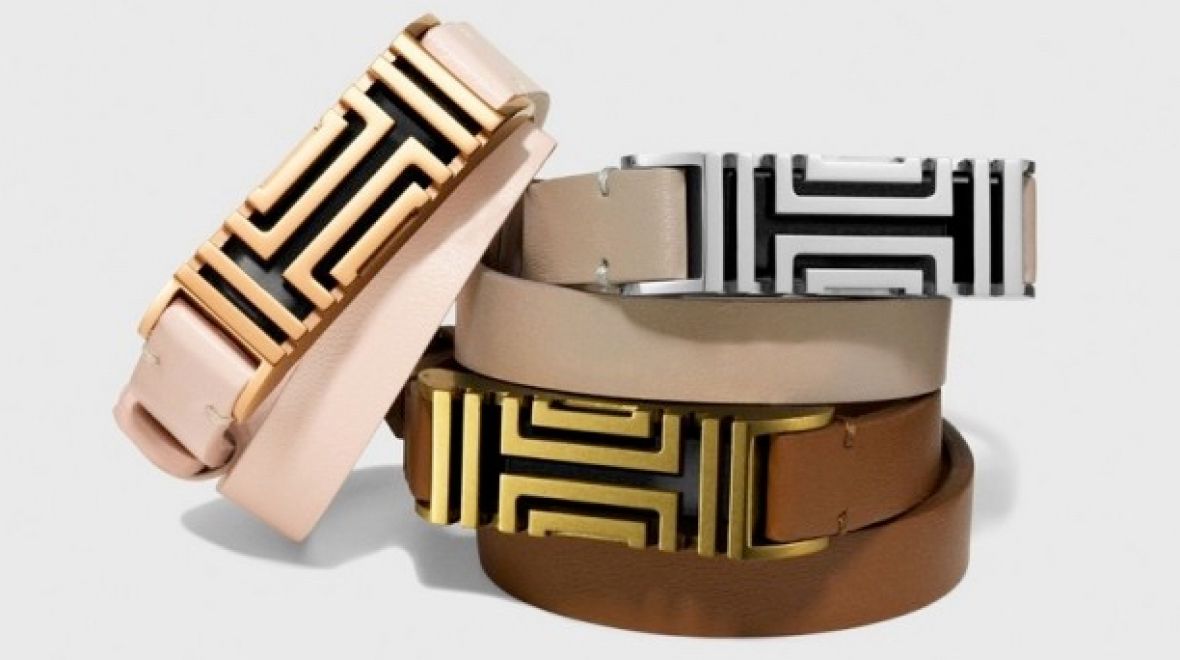 Fans of the American designer will be pleased to hear that her Fitbit collaboration has seamlessly integrated the health tracking tech with Burch’s signature open designs: the gold-plated bracelet and necklace look like any other piece of jewellery, and even the Fitbit silicone band has been given a makeover courtesy of Burch’s signature pattern.

The new Fret bracelet with its double-wrap design and range of colours is absolutely gorgeous too. 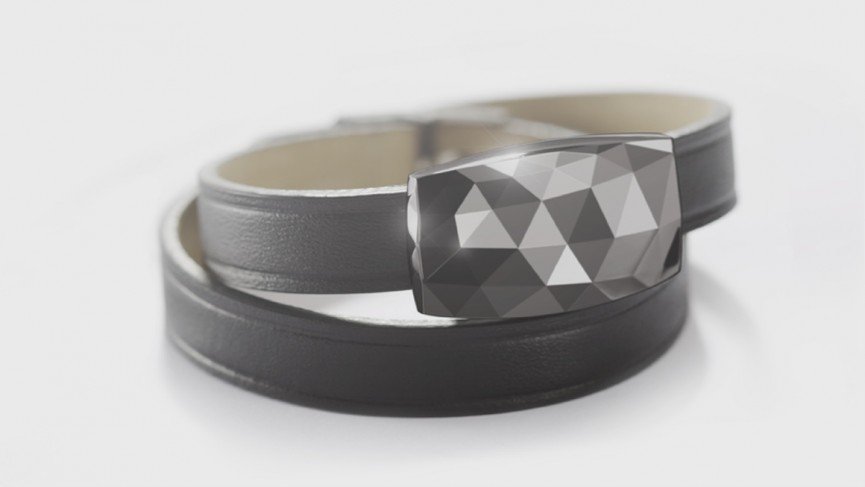 If you’ve ever been burned on a winter’s day (ahem…) or waited until 1pm to apply suncream, this could be a lifechanger. Masquerading as a gem on your wrist on a leather or silicone band, June constantly monitors the day’s UV exposure levels and keeps you informed via the app (iOS only) and tells you when to put on suncream.

Even better, it reminds you to re-apply, often the crucial factor in staying protected against the sun. To many this will be a futile device – surely you just put on suncream when the sun’s out? – but for others this will quite literally save your skin – in style.