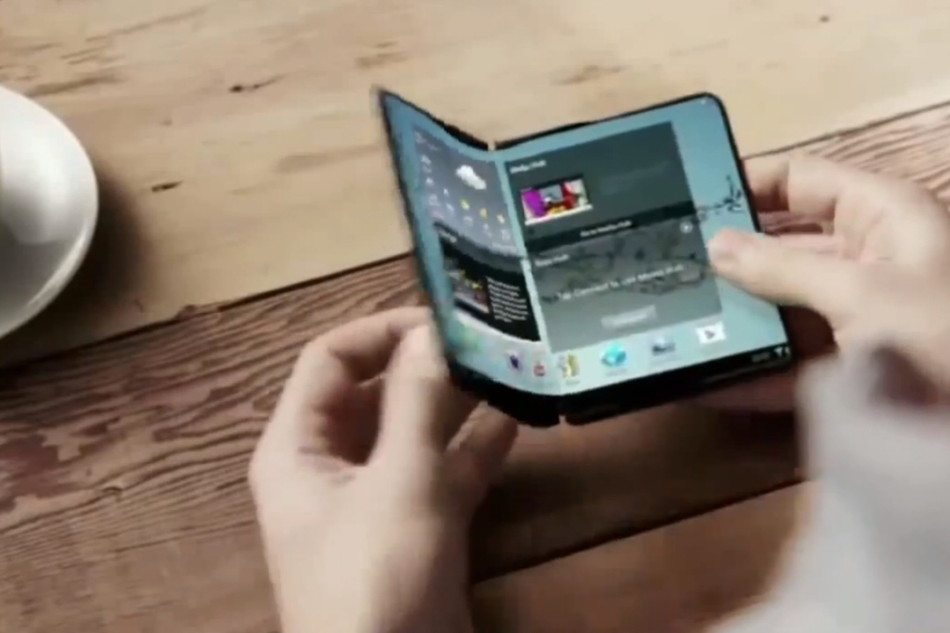 You might think the Samsung Edge display is cool, but something cooler is coming very soon. Samsung has been working on foldable displays for many years now, and the Korean giant might be ready to launch its first foldable smartphone in 2017. Information about the phone, which has been dubbed the Galaxy X for now, has slowly been leaking out, and here’s everything we think we know about it so far. 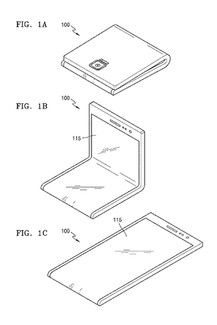 Patents filed by Samsung are are only real clues as to the Galaxy X’s eventual design we have so far. The most recent comes from Samsung Display and were registered with the United States Patent and Trademark Office at the end of September 2016. The diagrams included are dated mid-June, and show a clamshell-like device that resembles a makeup compact, folding out into a traditional rectangular smartphone shape.

A camera lens is shown on the top of the closed clamshell, an area that becomes the rear of the unfolded phone. A selfie camera and speaker are shown in the inside top of the phone.

More interestingly, the bottom of the screen appears to have a curved edge, and it’s visible when the phone is closed. This may serve as an information and notification ticker, rather than fitting a secondary display on the back of the device. Samsung already utilizes its Edge screen on the Galaxy S7 Edge in a similar way.

Before this, a different patent filed by Samsung looked at how a folded and unfolded Galaxy X may operate. For example, as Patently Mobile reports, a user could touch an icon on the edge area of the phone so that the app will be open once the device is unfolded. According to the patent, multiple user profiles will also be displayed on the edge area, allowing for multiple users to enter their password to access their information — all from the device’s edge. It’s important to note that this patent was filed in November, but was not made public until now. 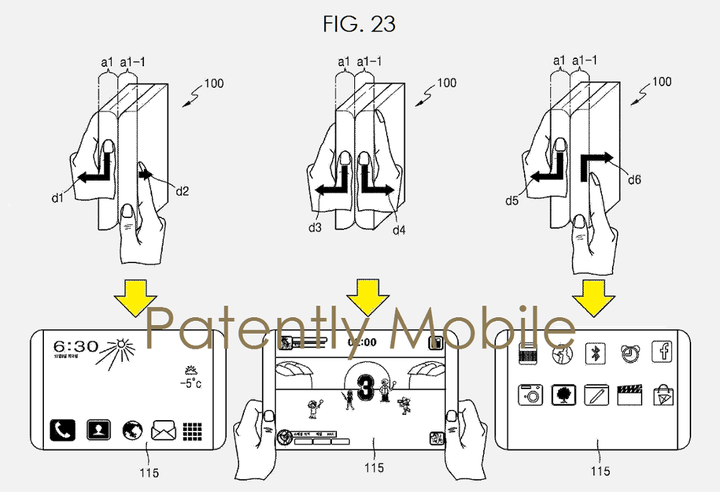 If rumors are to be believed, Samsung’s next Galaxy could sport an impressive pair of cameras and a cutting-edge display. According to a report from Chinese blog Wccftech, the Korean company’s next flagship will sport an AMOLED screen with a resolution of 4K (2160 x 3840), plus a dual rear-facing camera module. The latter, interestingly, will reportedly be entirely sourced from Samsung’s own camera division — in contrast to the Galaxy S7, several models of which packed Sony-made sensors.

A 4K phone screen may sound like overkill, but virtual reality was apparently one of Samsung’s considerations; higher-resolution screens have the potential to significantly improve immersion in phone-based VR peripherals like Samsung’s Galaxy Gear. And it isn’t far-fetched, either: in March, the company demoed a 5.5-inch “high resolution for VR” 4K panel in San Francisco.

Related  Garmin's new fitness trackers are its most fashionable yet

A dual-camera module, meanwhile, could deliver a big improvement in photo quality: in theory, such shooters can deliver everything from improved zoom capabilities to more colorful, detailed shots in low light. Manufacturers are already jumping on the bandwagon: LG’s G5 sports a dual-sensor shooter, as does Huawei’s P9. It wouldn’t be surprising to see Samsung follow suit.

Samsung is allegedly testing two variants of its future flagship, with the main difference being the processor. One has the Qualcomm Snapdragon 620, while the other has the Snapdragon 820 or 830. These are some of the newest processors from Qualcomm that feature Quick Charge 3.0, but if a launch is slated for 2017, it’s likely Samsung will opt for something newer down the road.

The only other specs that were revealed with this report include 3GB of RAM, a MicroSD slot for expanded storage, and a non-removable battery. The presence of a MicroSD slot will be welcomed by many, but it’s unlikely this phone will be all that affordable, at least early on.

When will you be able to buy Samsung’s folding phone? Sometime in 2017 seems possible, according to many rumors. Sources have told Bloomberg, and the Korea Herald, that we could see Samsung’s first foldable phone at Mobile World Congress in late February next year. The company is apparently considering building two new smartphone models — with one that folds like a wallet. One of the two devices will have a 5-inch screen when used as a cellphone, but can be rolled out to show off an 8-inch display.

Before being known as the Galaxy X, Samsung’s folding phone had the codename Project Valley, which was featured in various reports. The company introduced the concept of a foldable display at CES 2013 and supposedly showed its first foldable phone prototype in a private meeting at CES 2014.

However, an old report by SamMobile suggests Project Valley may not have a wide international launch at first. According to anonymous inside sources speaking to the publication, when the Galaxy X first goes on sale, it’ll be available in the U.K., Germany, Italy, South Korea, France, Poland, and Nordic countries. An exclusive version for the U.K. retailer Carphone Warehouse is also listed.

The U.S. isn’t mentioned, and although it’s certainly not official, restricting the phone’s launch would fit in with Samsung’s recent strategy. Samsung has been experimenting with launching different devices in different locations, controversially deciding to hold the Galaxy Note 5 back from the U.K. and Europe. Could Project Valley be a “designer” phone that’s all about the look, which Samsung says is what the region is looking for? If so, a U.S. launch may not come very quickly.

We’ll keep updating this article as we learn more about Samsung’s Galaxy X.