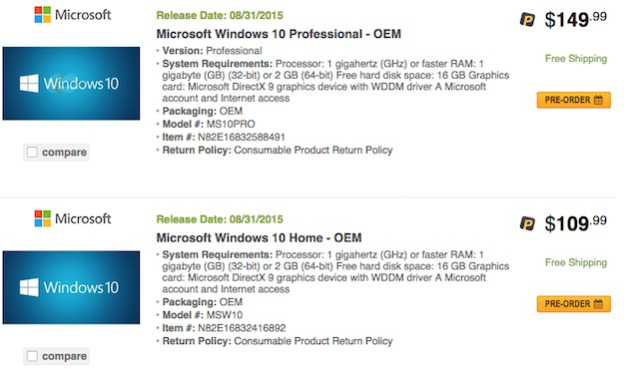 Windows 10 will be available as a free download in the first year after release to Windows 7 and Windows 8 PC owners, but anyone else who doesn’t qualify for the free update will be able to purchase a Windows 10 version.

Windows 10 will ship on July 29th, the company confirmed, meaning that the free update program will expire precisely on July 29th, 2016. Depending on the version of Windows 7 or Windows 8 you have, you’ll be able to update your computer for free to Windows 10 Mobile, Home or Pro.

Furthermore, the company announced that Windows 7 and Windows 8 device owners can already reserve their free upgrade. The procedure is really simple: all a user has to do is sign up for the upgrade, and then wait for it to be automatically downloaded on the computer – the upgrade system will also confirm whether the PC meets the hardware requirements for Windows 10.

When reserving, Windows 10 files will be downloaded on the PC by July 29th, and an upgrade alert will let users update their device once Microsoft starts the update process.

In case you haven’t already received a Windows 10 upgrade alert, you can simply open the Get Windows 10 app that you should already have installed on your computer via an update, click on the Windows icon in the lower right side of the taskbar, and then click “reserve your free upgrade” when prompted.

An extensive FAQ section is already available on Microsoft’s website, so if you’re having troubles reserving your Windows 10 copy, give it a read.