Google Glass 2.0 Is Real, and Here Are Photos to Prove It

Google’s Glass wearable is poised for an update. Sarah Tew/CNET

The next generation of Google Glass, Google’s head-mounted wearable display, is the real deal.

A filing to the Federal Communications Commission, the U.S. government body that must review and approve personal electronics like phones and wearables, reveals photos of the device’s external design, along with internal circuitry (see below) and also a basic user manual. The filing also includes a statement on company letterhead authorizing a third party to help get Google through the FCC’s authorization process.

A new edition of Google Glass signals a possible new direction for the company’s stalled and stagnant wearable, especially if it winds up in use as a business tool rather than as product for everyday buyers, as blog 9-to-5 Google reports.

Named as model GG1 on the FCC documents, the device appears to hew closely to the original Google Glass Explorer Edition. In other words, it will look like a set of eyeglass frames with a screen floating above your eye.

A previous patent from November depicts a version of Glass that looks like a squiggle of a device that would hug only half your head. Google apparently isn’t ready for that future of Glass yet. 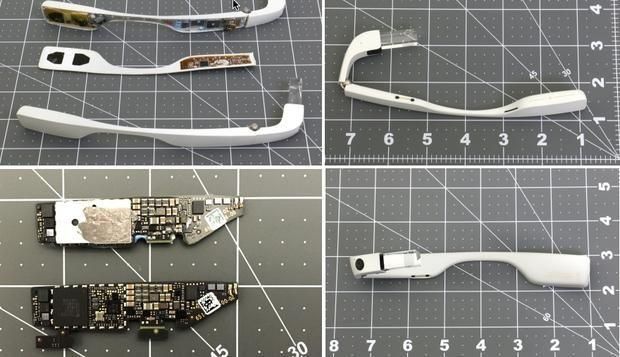 These photos show internal and external designs of a wearable suspected to be the next generation of Google Glass. Google; Screenshots compiled by Jessica Dolcourt/CNET

Unconfirmed rumors from 9-to-5 Google and The Wall Street Journalsuggest that the new edition of Google Glass will have a larger prism, a sturdier design and include an Intel Atom processor. It could sell directly to businesses.

Google Glass has had a rough ride so far. Launched in 2012 for developers and then in 2013 for buyers, Google Glass was widely received as expensive and invasive, the latter because people feared they were being photographed or recorded without knowledge or permission. Google stopped selling its first Glass edition in January 2015.

Google did not respond to a request for comment for this report.