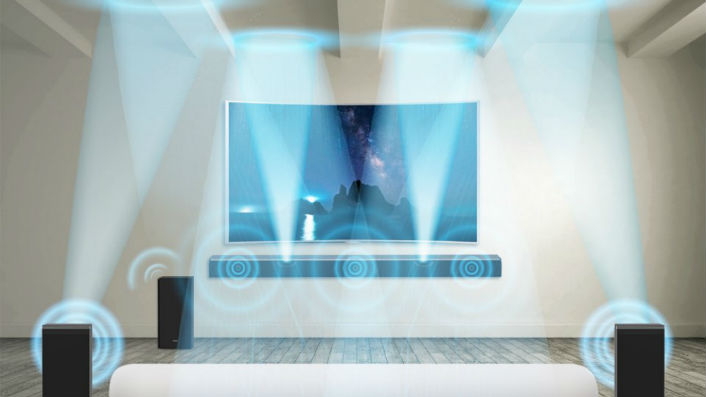 Samsung is unveiling its first Dolby Atmos soundbar at this year’s CES show in Las Vegas this week. The new HW-K950 is part of Samsung’s big audio push for 2016.

Dolby’s Atmos audio technology is arguably one of the greatest cinema sound innovations since THX first thrummed into our brains. It delivers three dimensional audio, with a sense of genuine movement to the sound.

That’s all well and good in bespoke cinemas, but not all of us are happy drilling holes in our ceiling to hide away the normally necessary speakers needed to pipe Dolby Atmos’ moving 3D sound around our living room. Samsung’s HW-K950 soundbar though is designed so that you don’t have to do anything other than plug and play.

There are three forward-facing and two upward-facing speakers in the new slimline soundbar, which wirelessly connects to a separate subwoofer to give depth to the room-filling cinema-style audio.

This isn’t the first Dolby Atmos soundbar. Yamaha also has a compatible aural heavyweight, the Yamaha YSP-5600, which packs forty-four discrete speakers into this monstrous soundbar to achieve the 3D sound. And it also supports DTS:X, a secondary three-dimensional home cinema audio codec.

The key differentiator for the Samsung HW-K950 though is the pair of rear speaker units, which are also connected wirelessly to the soundbar itself. These rear units provide extra positional audio data, bouncing Dolby Atmos sound off your ceiling to simulate recessed speakers.

That does make the new setup more like a traditional multi-channel surround sound home cinema configuration than what you’d normally consider a straight soundbar. Often the reason people opt for soundbars over surround sound systems is to avoid having multiple speakers dotted around a room, so it will be interesting to see how this hybrid setup fares when it hits the shelves.

But pair the HW-K950 up with a funky new Samsung SUHD TV, or a new Dolby Vision-capable TV, with all their incredible HDR skills, and you’re getting mighty close to simple home cinema perfection.