The design team behind the Bloodhound Super-Sonic Car has put its near-complete vehicle on show in London.

Some 8,000 people are expected to come and view it in Canary Wharf on Friday and Saturday.

Bloodhound has been built to smash the current land speed record of 763mph (1,228km/h) set by another British car, Thrust SSC, in 1997.

The new machine is due to start running next year on a special track that has been prepared for it in South Africa.

It has taken eight years of research, design and manufacturing to get to this stage.

What is on show at the East Wintergarden venue represents about 95% of the finished article.

Bloodhound has yet to take delivery of its rocket system – one of three power units in the car – and is still missing a number of minor aero-surfaces, such as winglets and air brakes, and the long strake that sits in front of the fin on the top of the vehicle.

“It’s amazing to see it like this, away from the workshop and almost ready to go racing,” said chief engineer Mark Chapman.

I can’t wait to see people’s reaction, to see the look on their faces. 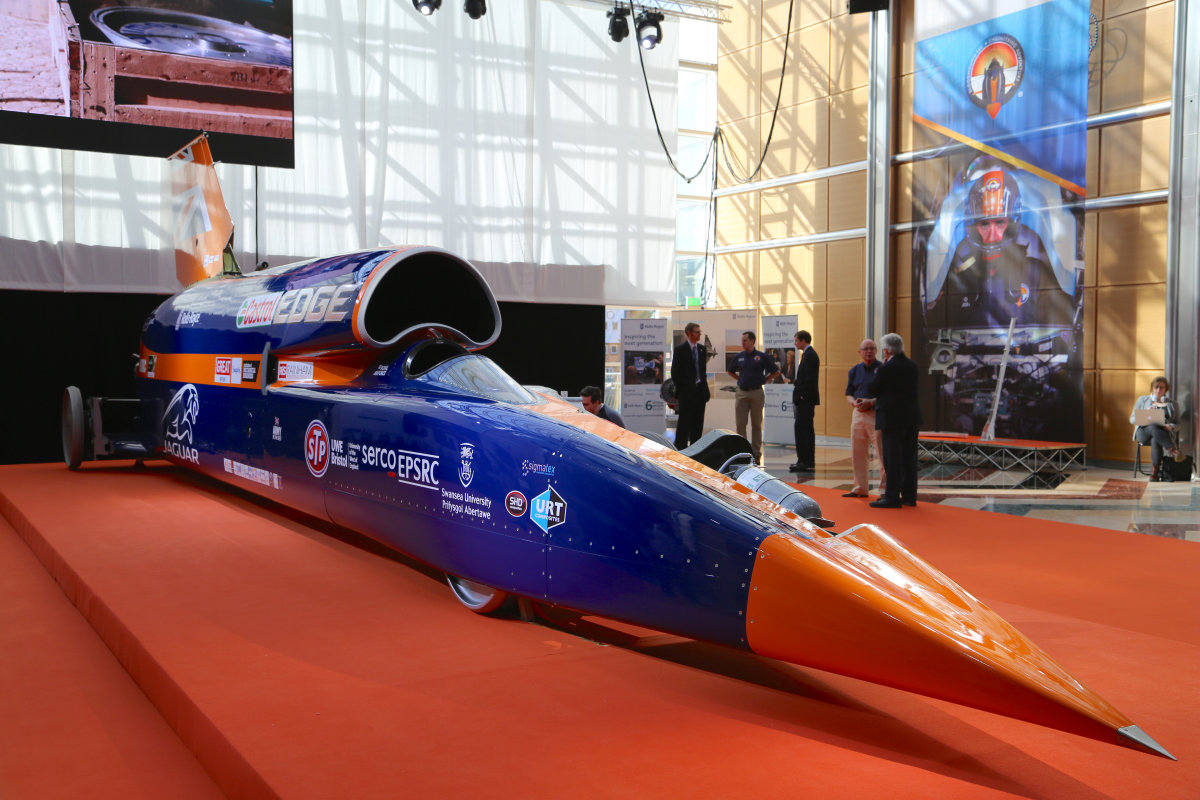 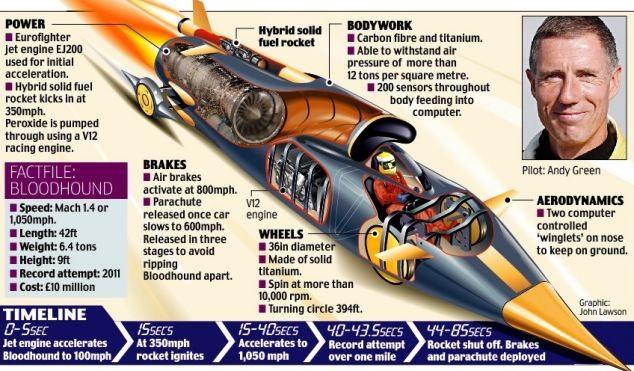 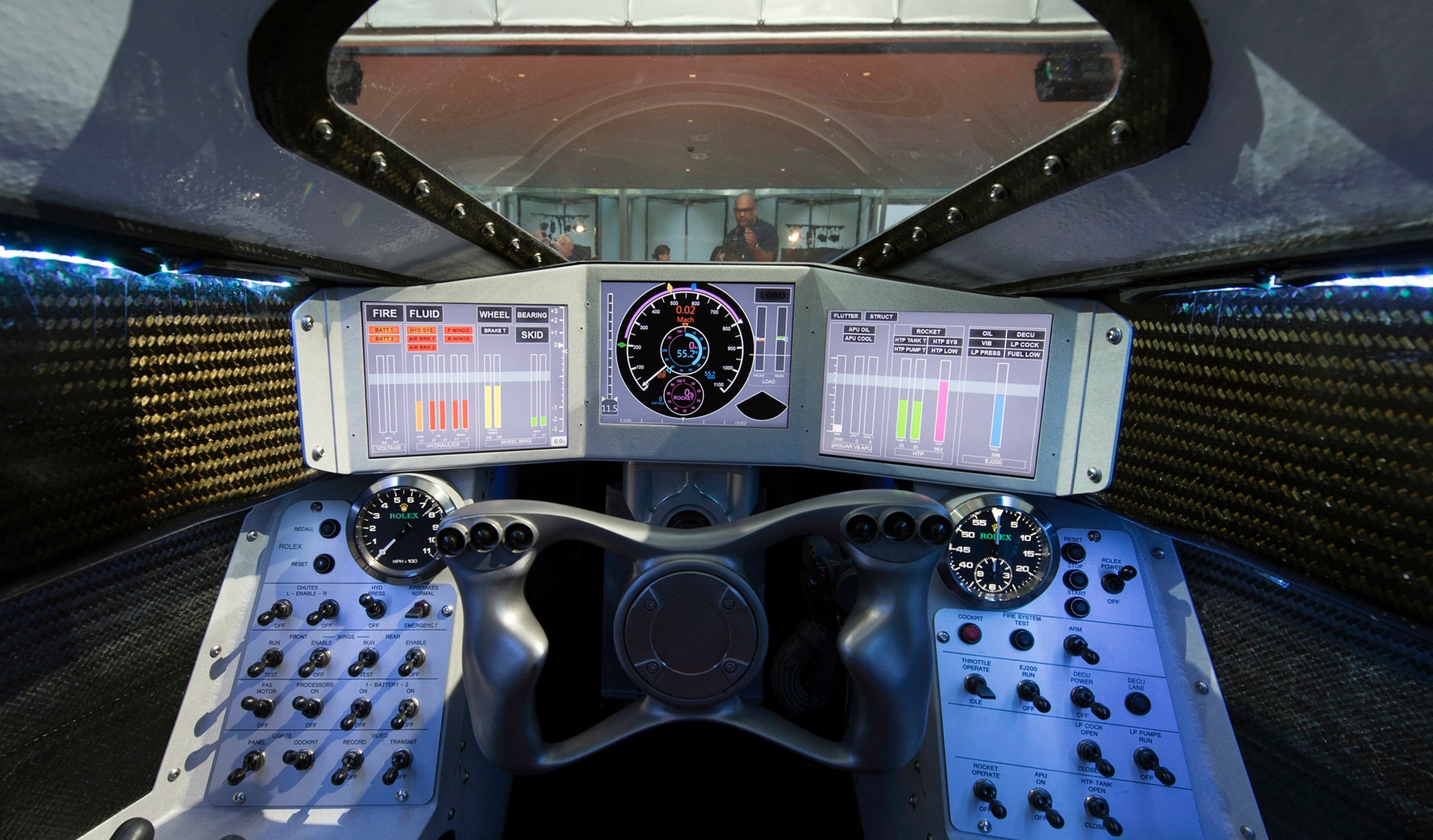 One side of the car has been prepared with a panel removed, to show the vehicle’s inner workings.

Visitors to the sold-out expo will also get to see the different types of wheel it will be using – solid aluminium discs for its record bids, and the super-thin rubber wheels that will be attached for low-speed shakedowns. The latter have actually been sourced from old Lightning fighter-jets and reconditioned.

Once the event is over, Bloodhound will be taken back to its Bristol design HQ to await the integration of the outstanding components.

This will come from a Rolls-Royce Eurofighter-Typhoon jet engine, working in tandem with a hybrid rocket from Nammo of Norway.

The third power unit in Bloodhound is a supercharged Jaguar V8. Its job is to turn the pump that forces liquid oxidiser into the rocket’s fuel chamber.

And if there is technical uncertainty hanging over the project right now, then it has to do with the pump system and the rocket. 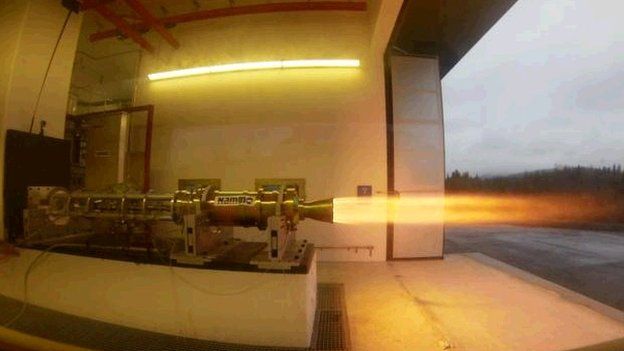 The design configuration, with all components present and linked together, has yet to run in anger.

“We’re working towards having the UK pump testing development completed by Christmas this year, and for us then to go out to Norway. We want rocket testing well under way in January/February,” said Mark Chapman.

Assuming that all goes well, Bloodhound will complete some low-speed drives along the runway at Newquay Cornwall Airport, using just the Eurofighter engine.

This will get the car up to about 200mph (320km/h) and allow engineers to sign off all electrical and software control systems.

It should then all be about South Africa in mid-2016 onwards. The playa lakebed of Hakskeen Pan is the chosen location for the record bid.

RAF Wing Commander Andy Green will again be the driver.

Whether Bloodhound succeeds or not will depend in large part on funding.

It has had substantial in-kind support from the UK Government. Military engineers have been lent to the project to help assemble the car. And Bloodhound is about to become part of the Great Britain campaign which ministers use to promote the country overseas.

But Bloodhound is really a private venture, and running a land speed effort is expensive.

To date, the team has probably raised around £40m.

“To get us through next year, we need on the order of £17m,” said Bloodhound director Richard Noble.

“Then, we’ll come back from South Africa and we’ll have learnt an enormous amount about it, and we’ll probably have to make quite a lot of changes and that will reflect on the cost.”

It is hoped that being able to show off a near-complete vehicle will be a draw to new sponsors.

Defence minister Philip Dunne came to view the car. He called Bloodhound the next incredible chapter in UK engineering’s quest to be better and to go faster.

“This is British manufacturing at its best, backing a British endeavour which the government is proud to support,” he told BBC News.

“Over 350 firms, big and small, have helped create Bloodhound, with persistent help from military engineers from the Army and RAF. 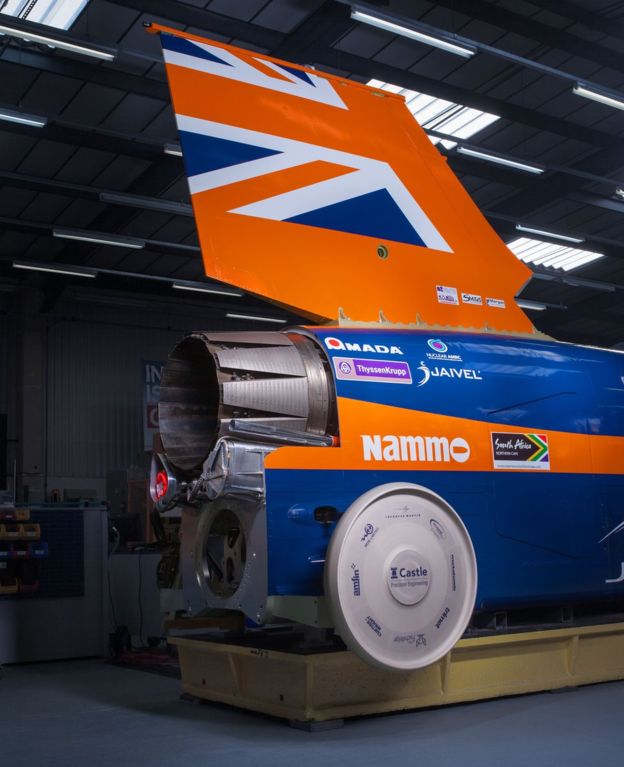 Below the nozzle of the EJ200 are two brake-chute canisters. Below those is a space for the rocket