BlackBerry Priv with Android: All the news and rumors 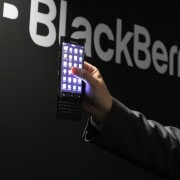 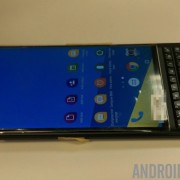 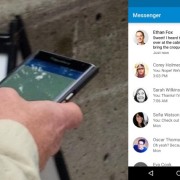 Android fans who still desire a physical keyboard will have something to celebrate later this year, because after many rumors, BlackBerry has confirmed it’s working on an Android phone. It’s called the Priv,  and here’s everything we know so far.

Updated on 09-25-2015 by Andy Boxall: Added in official news that the BlackBerry Priv is real, and coming in the near future.

It’s official: BlackBerry is making an Android smartphone called the BlackBerry Priv, and it’ll be on sale before the end of the year. The confirmation comes after a stream of rumors surrounding the device, and was announced inside the company’s second quarter financial results. Sales of its BlackBerry phones reached just 800,000, a third of that seen a year ago, and overall sales dropped by half at the same time.

CEO John Chen wrote in a statement that the company is “focused on making faster progress to achieve profitability in our handset business,” and this has resulted in the Priv, an Android smartphone. There are no official details about the device’s spec yet, but it will “combine the best of BlackBerry security and productivity with the expansivemobile application ecosystem available on the Android platform,” said Chen.

The Priv will have a slider design, and support both Android for Work and BlackBerry’s BES12 platform, showing the firm is aiming it more towards business and Bring Your Own Device (BYOD) users. It’s not abandoning BlackBerry 10, and will release version 10.3.3 in March next year.

We’re told more will be revealed in the coming weeks, and the device will be sold in stores and online before the end of the year.

A Blackberry phone with a codename of Venice leaked back in June, and was believed to be running Android. It was slated to arrive in November with the following specs: a 5.4-inch Quad-HD screen, a 1.8GHz 64-bit hexa-core Snapdragon 808 processor, 3GB RAM, as well as an 18-megapixel rear camera and a 5-megapixel front-facing camera.

The Venice was shown to have a slide-out physical keyboard, suggesting it was the mysterious slider device CEO John Chen teased at Mobile World Congress. Rumors said the display supposedly has dual-curved edges just like the Galaxy S6 Edge.

In mid-September, Baka Mobile released a hands on video with an alleged BlackBerry Venice evaluation unit. This video reveals a quick launcher to the BlackBerry Hub, Google services, and global searching for both the Web and phone data. The default Web search appears to be Google since the Google Search bar is active on the main screen.

The main interface looks very close to stock Android, but there is no question BlackBerry will add it’s own services into the mix.

We also get a fantastic look at the physical keyboard and the sliding mechanism. The keyboard itself is capacitive, meaning that you will be able to swipe it to scroll content on the main display. It looks really slick.

Content freaks will also be happy to know that a MicroSD slot is onboard as well. Unfortunately, we don’t know how large of card it will accept.

On top of the video, Android Authority released a few more pictures of the BlackBerry Venice. The pictures don’t reveal anything new other than they continue to confirm the existence of Android. However, we now know the model number, which is STV100-6. 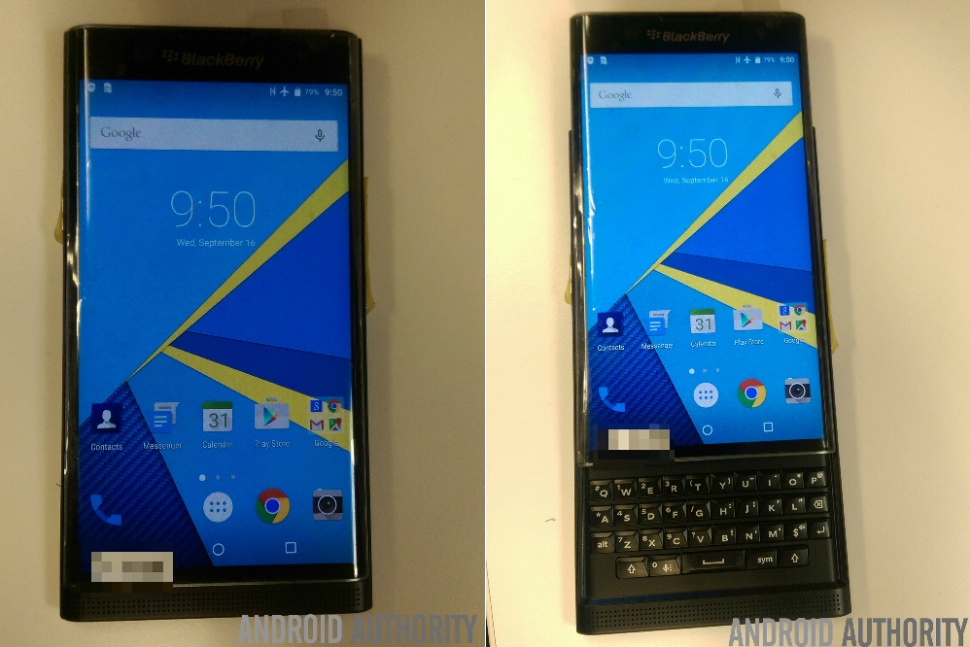 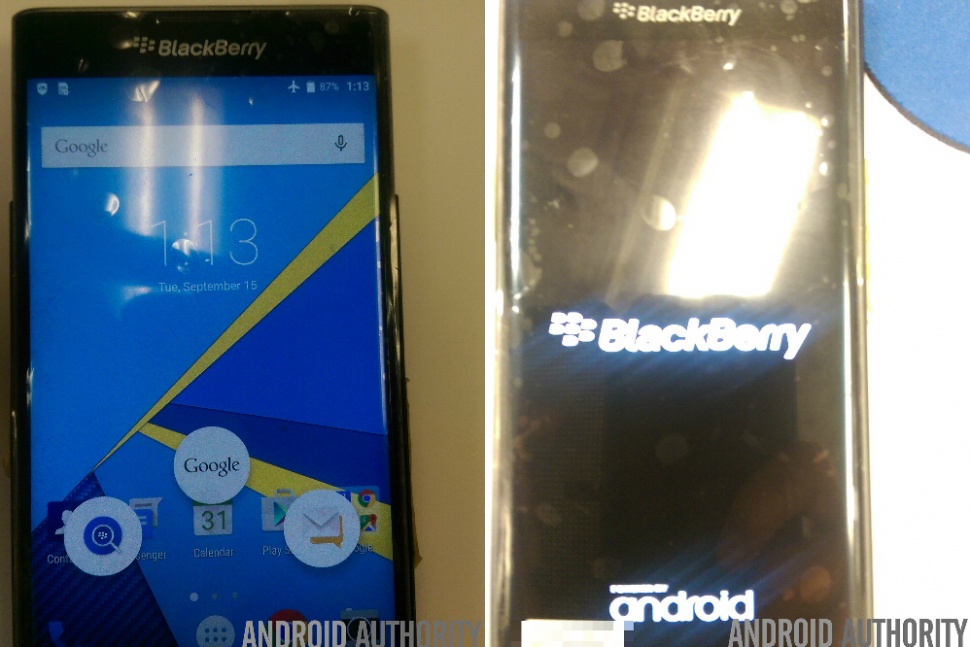 Apparently more than a few people were sporting the BlackBerry Venice at the Toronto Film Festival in mid-September. This isn’t a surprise since the company’s headquarters is only 70 miles away. One fan was able to sneak up behind someone using the said device and capture it on camera.

Although not the greatest photo, it showed the Venice running Android. The app appearing on the display looks awfully similar to Google’s Messenger app. Take a look at the second image below, which shows the Messenger app side-by-side with the phone. 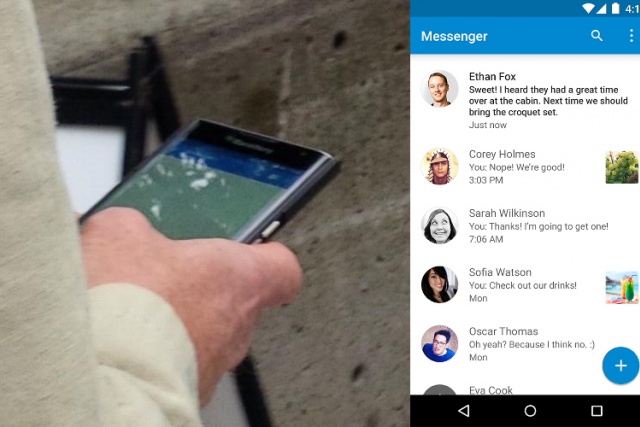 The first high-quality images of what could be the BlackBerry Venice slider appeared online in late August. They give further confirmation to what the keyboard looks like and the presence of Google apps. However, this is the first time we get to see the sliding mechanism from the back of the device. You will also notice that the rear camera will likely sport dual LED flash.

Famous leaker Evan Blass posted two GIFs in mid- to late August of what could be the BlackBerry Venice. The first animation is a closeup of the physical keyboard and the rear 18-megapixel camera.

This second animation shows the keyboard sliding down. You will also see that many Google apps appear on the device indicating that it will be Google certified.

Following a variety of shadowy leaked images, a clear press-style image of what may be the BlackBerry Venice was posted on Twitter by Evan Blass in mid-August. The picture shows the phone with its slider section extended, revealing a physical keyboard. Above it, on the display, is what looks like Android.

In mid-August, Crackberry forum member Mikey_NNG posted an alleged image of the on-screen keyboard from the BlackBerry Venice. He claims to have played with the device for a few minutes and it was running Android Lollipop. The back button is more spaced out than on existing BlackBerry keyboards, indicating that it is indeed an Android. A curved edge display is also clearly visible.

Alleged renders of the BlackBerry Venice were posted in early August by Crackberry, and they reveal an Android interface, a curved edge display, and an 18-megapixel camera. The first render shows what appears to be the BlackBerry Hub running on Android. The circular action button (pen icon) at the bottom center of the display complies with Android’s material design principles.

A GIF posted by leaker Even Blass in late August reveals the BlackBerry Productivity Suite, which includes the BlackBerry Hub, contacts, and unified calendar apps. These apps are not presently available on Android, but the Material Design elements are a clear sign they were developed with Android in mind. They are likely to debut on the BlackBerry Venice.

Leaked photos of the Venice and possible marketing materials suggest the phone will have complete access to Google’s apps. Early on, the Chromecast icon appeared in the renders, for example. The latest picture of the phone shows a wide variety of Android apps that aren’t available for BlackBerry phones, including Google Maps, Hangouts, Google Calendar, and most importantly, Google Play.

In addition to the presentation slides posted by Crackberry — which also showed an image of the previously leaked 18-megapixel rear camera — another two slides were added to the collection by Evan Blass on his Twitter account, this time showing the phone with Google Play on the screen, and one referencing a content transfer app. In this slide, reference is made to an “Android BlackBerry device.”

In early August, a tweet stated that T-Mobile will offer the BlackBerry Venice slider, which followed the news that AT&T would also offer the phone.

In late August, images of black and silver BlackBerry Passports running Android 5.1 were leaked by Evan Blass and Dudu Rocha. The first couple of images are press renders from Evan Blass, but the other three are actual hands on pictures courtesy of Dudu Rocha.

According to Dudu Rocha, this Passport Android device will have a 4.5-inch square display, a 2.26GHz quad-core Snapdragon 801 processor, an Adreno 330 GPU, 3GB of RAM, 13-megapixel rear camera, and a 3,450mAh battery.

The images were lifted from a video, and shortly after they were posted online, the entire video was discovered. The silver Passport is identified under the codename Oslo, and appears to run Android Lollipop with a variety of BlackBerry tools installed, along with access to Google Play. The origin of the phone is unknown, so we don’t know whether it’s a homebrew device, or something more official. Take a look at the video below. 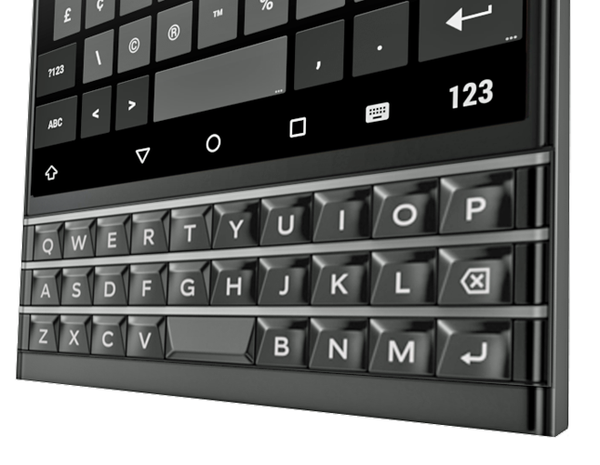 The above image cannot be the Venice since it doesn’t appear to be a slider. We can only assume it’s the Prague, but the codename wasn’t specified. Earlier reports said the Prague would resemble the BlackBerry Z3, but this image looks more like a Passport (pictured below). 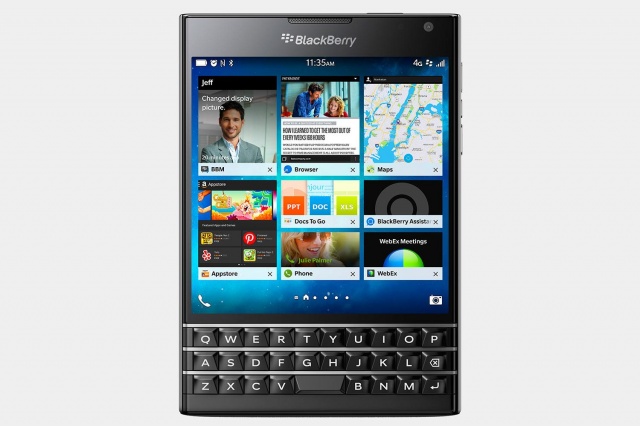 While the Venice is expected to be a premium handset, sources say that BlackBerry is thinking about emerging markets for another Android phone — and that could be where the Prague fits in.

However, as of late September, BlackBerry has only announced one Android phone — the Priv. We’ll keep you updated with more news as it emerges.