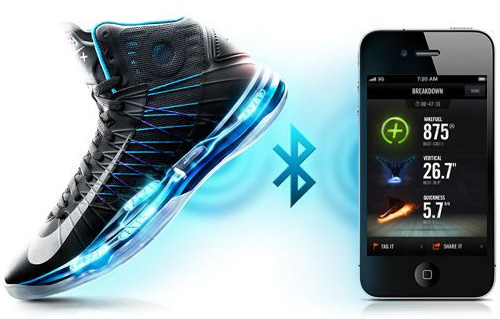 The thing with electronic gadgets is that it is a display of your taste, your style and even your personality – from the decal you choose to put your Mac or iPad Mini, the favorite geeky T-shirt you wear to class or work, or even your choice of tablets. But now we can take this up a notch by putting on our favorite wearable gadgets that don’t just look good but works great as well.

We’ve compiled a series of functional and fashionable items that have the appearance of everyday apparel camouflaging simple but powerful gadgetry. Some of them are already in the open market, while others are still in the concept stages, awaiting to make its debut to excited fans.

Similar to the notion first brought to the stage by Google Glasses, the Vuzix M100 Smart Glasses was recently featured in CES 2013. The glasses pairs with your Android smartphone via Bluetooth and comes packed with Android 4.0, GPS, Wi-Fi and 4GB of storage. 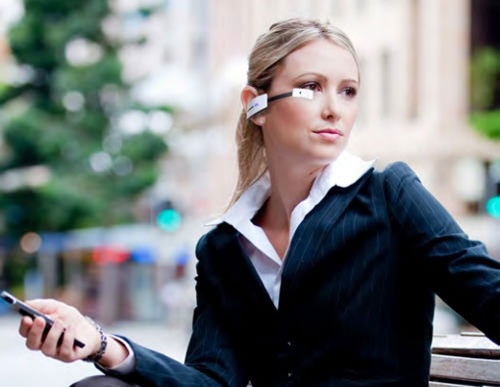 Launch apps from your smartphone and watch everything displayed on the 800×400 pixel screen right before your very eyes (literally!). Enter the world ofaugmented reality with this cool wearable gadget.

Geeky T-shirts aren’t exactly new, but put in some electronics, a few AA batteries, turn down the lights and you can actually have an equalizer dancing on your chest, reacting to the sounds around you.

Another kind of interactive shirt is one that makes sound – the electronic drum kit shirt has 7 spots that generate sounds when you push down on them. T-shirts like these are cheap to come by as they do not need high tech wizardry, just an electronic board that you have to remove before handwashing these T-shirts.

The earphones are machine washable (hence, waterproof – a very important feature for wearable gadgets) so you can skip the dreadful task of removing them and putting them back in. The Rusty clothing line has a lot of selections for men and women at various prices.

Of the many out-of-the-ordinary flash drives, this one gives off a positive, almost classy vibe. Part of a line of crystal-studded USB drives, this 4GB USB necklace by Swarovski is proof that tech can also be sophisticated and elegant at the same time. 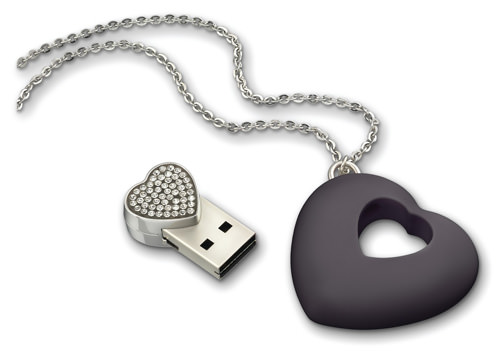 At a price tag of $75.00, the necklace is also available in Violet and Light Rose. This two-part heart-shaped necklace is the perfect Valentine’s day gift for the tech girl in your life.

Similar to the USB necklace, these cufflinks give a professional look to an already clean and formal look. Each cufflink carries 2 GB worth of storage, and is also available in gold and gunmetal. 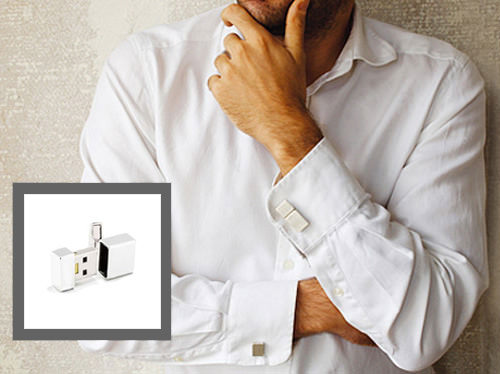 To personalize this even further, there is an engraving service where you can put a monogram of up to 8 characters (pick from a range of fonts) on your cufflinks for only $8.00. Finally, a flash drive you can put your name on, at $100.00 a pair.

The Nike+ FuelBand tracks your daily exercise and the calories burnt while doing those activities. For every activity, the LED will light up and let you know your progress. You can set these goals, view detailed progress, and unlock achievements to stay motivated, or share it with your social networks via its iPhone app. 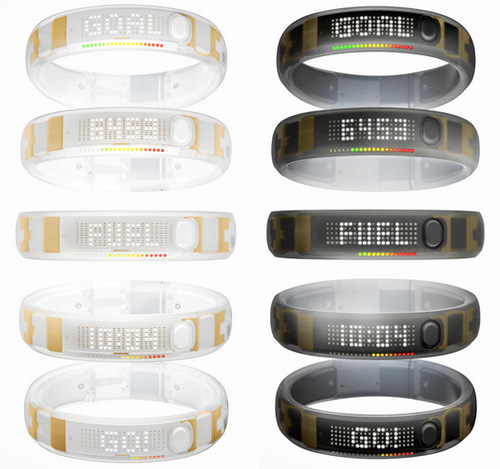 The I’m Watch is a smartwatch that has its own market of apps. It connects to your smartphone via Bluetooth and once connected, it does what your smartphone does. You can receive notifications, read emails or messages, and make or receive calls. 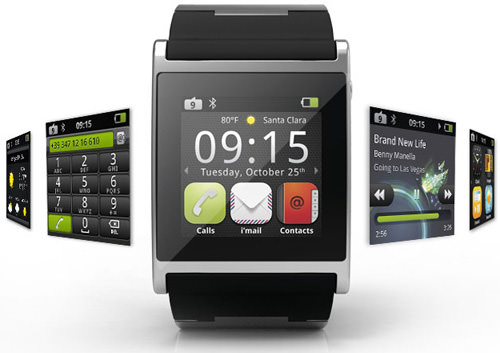 The watch is touchscreen and can act as a hands-free device with its built-in microphone. It also has an app store, and programmers are able to build new apps for its unique ecosystem. Available in seven colors, it is on the market at $400 a pop.

Not a fan of smart glasses? Then, go for a smart watch instead. The Pebble is a watch that is paired with your iPhone or Android phone via Bluetooth. You can then receive push notifications such as Facebook messages and alerts for calls, messages and email. The magic behind the Pebble is that it is highly customizable and is great for use in the outdoors. 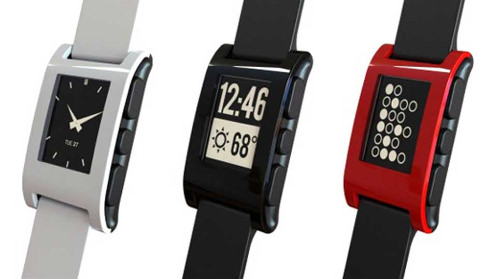 The E-paper technology ensures that you don’t have to fuss with the brightness of the display, and while you jog with it, you can toggle your music, track your distance and running time, and still receive alerts. To use it, you need to download the Pebble app into your smartphone but if you are feeling adventurous, there is an SDK for this watch, available at their blog.

Whether it is because you don’t like having to change wallets once they are worn down, or if you don’t like the feel of leather on your skin, iWallet is a game-changer you’d want to take a look at. With a strong, hard casing,biometric access, and bluetooth technology to act as a deterrent against thieves, the iWallet is out to prove that it takes your security very seriously.

Related  Google Self-Driving Car Pulled Over For Going Too Slow

If the iWallet or your phone is too far apart from one another (more than 10-15 ft), your phone will sound, warning you of a pickpocket’s foiled attempt or if you have misplaced either of these important personal effects. Prices are in the $459 to $599 range and the wallets are available in carbon fibre and aluminium shell.

Athletes always want to improve themselves, and with this pair of Nike Hyperdunk+, basketball players can monitor their speed, jump height and their overall game performance. There are sensors on the shoe that transmit information to your smartphone via bluetooth.

You can even record videos of the play, then watch the videos with the matching display on screen. The videos and your stats can be shared on social media, or can be used to monitor your progress.

Because we live in an era with many creative and innovative people, concepts can sometimes come to life in a very short time. Here are 2 bonus conceptual wearable gadgets that we could probably see in the near future.

The problem with wearing gloves while riding a superbike or skiing is that it’s impossible to reach for your smartphone with the thick outerwear. BEARTek was a Kickstarter campaign that had a great idea: a glove that communicates with your smartphone via Bluetooth. It has 6 touch points, that you can use to answer phone calls, and even basic music controls. 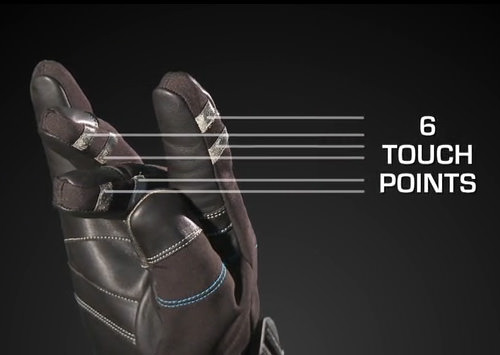 Google has it all, the operating system, the browser, the digital wallet and now, maybe, a SmartWatch. Here’s a concept by Adrian Maciburko of the rumored Google Smartwatch which features a touchscreen interface that allows y ou to swipe between time, calendar, weather info and your Google+. With Google behind this, the possibilities are endless and only time will tell what Google could pack into this futuristic timepiece. 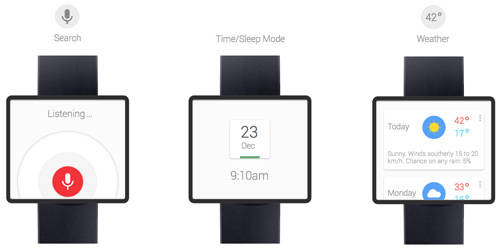