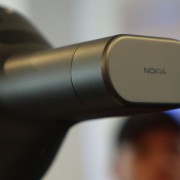 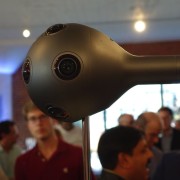 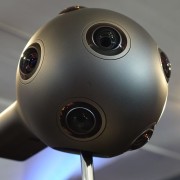 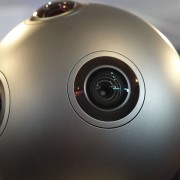 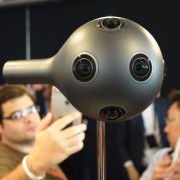 Nokia’s event in Los Angeles wasn’t a smartphone, but instead a 360-degree film camera for virtual reality projects. Named OZO, it is intended for Hollywood and other video makers who intend to use virtual reality in the future.

The eight sensors that cover the spherical camera will collect film in 360-degrees, with playback stitched together within minutes. Nokia claims this is the first of its kind, with playback through VR normally taking hours in post production.

This near real-time software is a big enhancement for directors, who want to check a scene for mistakes before moving on. The software stitching is not bulletproof, with a lot of tearing and processing making the 360-degree film look wonky, but Nokia claims that can be fixed in post-production.

The virtual reality device will also have three microphones, capable of tracking where the noise came from. This is the most interesting feature on the camera setup, binaural audio allows the user to look behind them and see where the noise is coming from, instead of the developer or film editor adding the noise in later.

Having a more natural audio system will remove some of the issues with lip syncing, an issue virtual reality films have suffered from in their short lifetime. Nokia also plans to make headway with the design of the device, a lot less bulky than other virtual reality cameras.

Nokia OZO will be available for a five figure price, meaning hobbyists will need to empty their pockets to pay for this. Hollywood, advertisers and professionals are the target demographic and Nokia wants this to become the standard tech for filming VR.

It already has a few film studios lined up to partner with, but has not disclosed the price for OZO. We expect to hear about it more in the coming months, as Nokia ramps up production for the camera.

Unlike the phone and tablet, Nokia intends to manufacture and sell this directly. This will be the first product post-Microsoft sale that is built by Nokia, instead of licensed to a third-party company.

Images from “The Verge”.