Review of Future and Application of Wearable Biosensors

Wearable Biosensors (WBS) are gaining endless interest nowadays and today they promise to be one of the great developments in the sector of wearable health technology. WBS; a main category of biosensors is good to use for healthcare, applications related to sports, military etc. Rapid growths of these devices are on the way which will help to provide advantages like easy to use, low cost and providing real time information. Developments in wearable health technology and WBS have evolved to the point that they can be considered ready for all clinical purposes.

The use of wearable monitoring devices or wearable biosensors that allow constant monitoring of physiological signals is essential for the advancement of both the diagnosis and treatment of diseases. Wearable systems are devices that allow physicians to overcome the limitations of technology and provide a response to the need for monitoring individuals over weeks or months. Wearable Biosensors typically rely on wireless sensors enclosed in bandages or patches or in items that can be worn. The data sets recorded using these systems are then processed to detect events predictive of possible worsening of the patient’s clinical situations and they are explored to access the impact of clinical interventions.

Wearable Biosensors is generally a combination of wearables and biosensors. Wearables are objects that can be worn on the body. For e.g. smart watches, clothes, bandages, tattoos, patches, spectacles, rings etc. are some wearables. While, Biological Sensors in short Biosensors is a device made up of transducer, biosensor reader device and a biological element. Here the biological element can be an antibody, enzyme, or a nucleic acid. The function of the biological element is to interact with the analyte being tested and the biological responses are converted to an electrical signal by the transducer. Depending on the applications, biosensors are also known popularly by the names like immunosensor, optrodes, biochips, glucometers and biocomputer. Biosensor reader device are responsible for the display of the results. This is considered to be the most expensive part of the biosensor. Known manufacturers of biosensor electronic readers include Gwent Biotechnology Systems, Rapid Labs and PalmSens.

WBS are digital devices that can be worn on the body in the form of wearable systems or devices such as smart shirts, smart watches, thin bandages or tattoos —allowing blood glucose levels, blood pressure, heart beat rate and other biometric 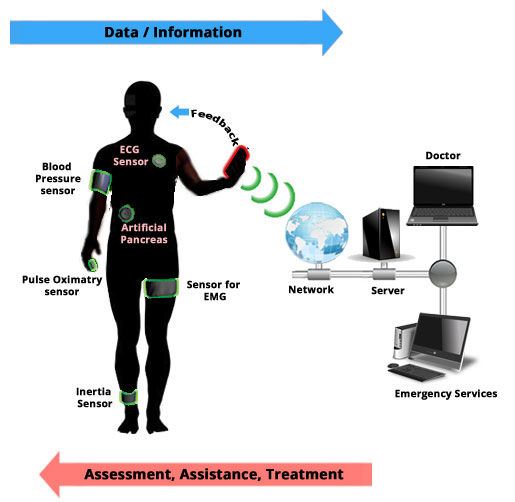 data to be measured continuously and constantly. This real time information is then sent wirelessly to healthcare providers or monitors. Wearable biosensors are being developed today to bring out a healthcare reform. Wearable Biosensors creates a two way feedback between doctors and patients. These devices can transform the major diseases from episodic and inefficient continuous monitoring. WBS is a rapidly growing wearable health technology sector. By 2015, it is believed that there will be greater than 400 million WBS in use worldwide (ABI Research). As a result, in the coming 10 years’ time, things will look really different than they look today.

Today, we can see that wearable biosensors are bringing out a wave of innovation to the society. Their comfort and better use can provide a new level of exposure into a patient’s real time health status. This real time data availability will allow better clinical decision and will result in better health results and more efficient use of health systems. For the human society, wearable biosensors may help in early detection of health events and avoidance of hospitalization. The potential of wearable biosensors to shorten hospital stays and reduce readmissions will surely attract favorable attention in the coming future. Also, research statistics says that WBS will surely bring a cost effective wearable health technology to the society.

Based on the Transparency Market Research, the market value for wearable biosensors is huge; and it is said that it will reach to a market value of $18.9 billion by 2018. The biosensors market is expected to witness considerable growth owing to its wide array of applications in cardiac monitoring, diabetes monitoring, agriculture, bio-defense practices, environmental and drug discovery. Vital Connect (Campbell, California), a wearable biosensors company is on the way to bring the global market for biosensors to an extreme level by 2015.Some recent developments of WBS are discussed below 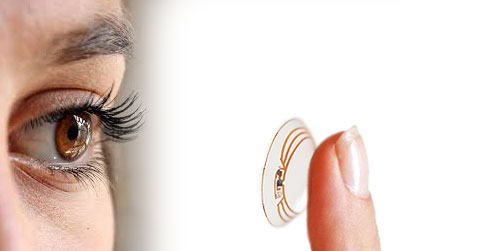 A smart contact lens measuring the glucose amount in tears was recently brought out by Google as wearable biosensors, the same company that brought out Google Glass and Google Driverless Car. It consists of a small glucose sensor and a wireless chip. Built into the lens and between two layers of the lens material, the glucose sensor and wireless chip is embedded. The aim of this WBS is to help diabetic patients. A small pin size hole in the lens allows the tear fluid to go into the sensor to measure blood sugar levels. Electronics lie outside the pupil and iris hence there is no damage to the eye.

Healthpatch Biosensor has made the wearable technology one of the important routes to mobile health. HealthPatch, as wearable biosensors has the ability to monitor chr 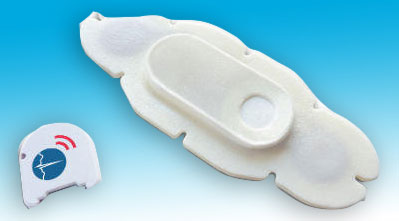 onic diseases. Biometric data and any disease sign is wirelessly sent and are monitored by doctors and patients via Bluetooth. HealthPatch, developed by Vital Connect, is now under review, but has been brought out in Canada and Europe. In Healthpatch, the sensor is fitted to a disposable and adhesive patch. This patch is designed such that it is suitable to be placed on the chest. The sensor here has the ability to gather biometric datas like Pulmonary (sleep duration, Respiratory rate,  , sleep quality ,sleep actigraph/sub-posture), Neurologic( Gait analysis, fall detection/severity), Cardiovascular (heart rate variability, heart rate, Single-lead ECG,  contextual heart rate), and Other(step count, posture, Temperature ,summarized activity, energy expenditure, stress).

Related  Google Glass 2: Everything you need to know

Recently, research people from the University of Michigan have developed a graphene vapor sensor that could be worn on the body as wearable biosensors and continuously monitor specific biochemical informations from our breath and skin. The university is working with the National Science Foundation’s Innovation Corps to commercialize the device. Graphene vapor sensors are not the only “chemical sniffing” products available. Electronic noses and breathalyzers have been on the market world. Menssana Research is developing a portable system called Breath Link to detect breast cancer. 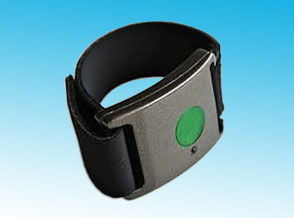 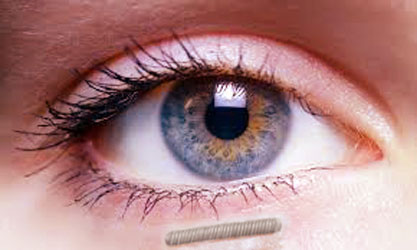 According to researchers at the Fraunhofer-Institute, this new wearable biosensor will help the diabetic’s patients. These wearable biosensors will measure the glucose levels using tissue fluids like tears and sweat and not blood. They developed a nano-form biosensor which is precise and consumes less power. The new biosensor is based on an electrochemical reaction activated with the help of an enzyme. The WBS transmits data over WiFi to the mobile receiver. The patient hence will be able to continuously monitor his or her glucose level. 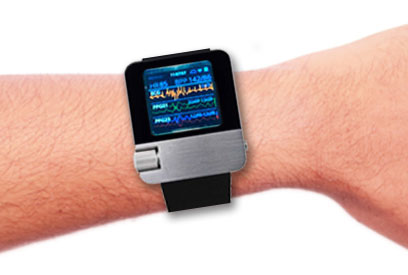 Samsung has brought out a new sensor filled watch Simband and a cloud platform for storing health data collected by the device. Simband uses a sensor filled wristband and a large display for monitoring body metrics in real time. This product of Samsung will collect health data from the user and report it up to the SAMI(Samsung Architecture Multimodal Interaction)) cloud. The sensors in the band project beams of light into the skin at varying strengths in order to reach tissue near the surface or deeper in. The screen then displays metrics like heart rate and blood pressure in real time; you can see the wave forms moving across the screen in different colors. Simband has a 1GHz and 28nm ARM Cortex-A7 chip with Bluetooth and Wi-Fi. 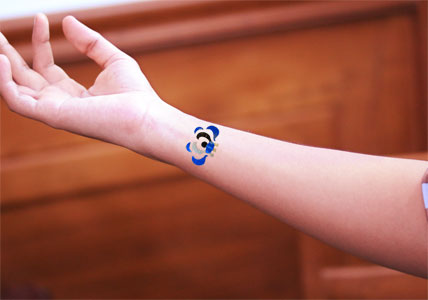 Laboratory for Nanobioelectronics by Professor Joe Wang has developed simple, sensitive and fairground WBS tattoos that help us to metabolite levels in sweat and monitor electrolytes. To access the biological health of the wearer, these wearable biosensors have been integrated with electrochemical sensors which help in monitoring lactate levels and pH in the sweat. The biosensor tattoos can be directly applied on skin or clothing. Researchers say that, higher the amount of electrolytes, ammonia and sodium in sweat, higher is the person’s physical activity. This technology is good for people who need to know their weight and daily levels of physical activity. 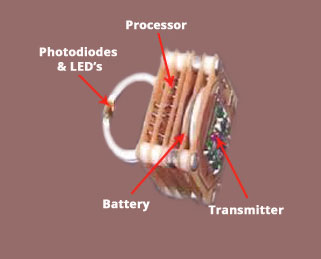 Ring Sensor is a pulse oximetry sensor which allows monitoring heart rate and oxygen saturation. The device is shaped like a ring and it can be worn for long periods of time. Red LED, Infra-red LED and a photodiode are embedded in the ring. The whole process is scheduled and controlled by a single processor. Transmitted waves are sent through a digital wireless communication link which when received are analyzed by a home computer. Technology of pulse oximetry is built into the computer for monitoring the patient’s pulses and blood oxygen saturation. Now ring sensor is also used for differentdiy electronic projects. The ring sensor can be worn all the times. Due to this, continuous health monitoring is possible. The heartbeat pulses shown are noise free and hence this wearable biosensor is really good.

Smart shirt developed at Georgia tech uses optical fibers to detect wounds and special sensors and interconnects to monitor the body vital signs. This smart shirt provides a framework for monitoring, i 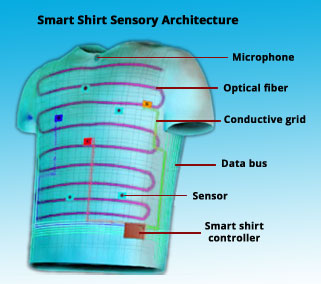 nformation processing devices and sensing. The basic advantage of smart shirt as wearable biosensors is that it helps to provide a systematic way to monitor the vital signs of humans.

T-connectors are used in the clothing and are attached to the optical fibers which act as a data bus to transmit the information from the sensors on the body. Since the shapes and sizes of humans are different, the sensors can be positioned on the right places for all users. Moreover this smart shirt can be laundered without any damage. It helps in monitoring the heart rate, respiratory rate and temperature.

One of the main applications of WBS and biosensors will be in the health care. As a result, technologists are trying to develop the biosensors in such a move that in the near future a different shape to the health care can be achieved. Development in biosensors can help the patients to have continuous monitoring of their health statistics. Thanks to Wi-Fi and Bluetooth technology, because they are one of the main reasons which helped in the continuous and updated health statistics. Now let’s have a journey through the future health care using biosensors and wearable biosensors by viewing the diagram below. These sensors will support the patient care outside the hospital. Without the need of frequent visits to hospital the patient can monitor her health statistics. Thanks to the future biosensors. The datas obtained from the sensors will also signal her physician and thus frequent advices and support can be obtained.