‘Five-dimensional’ glass discs can store data for up to 13.8 billion years 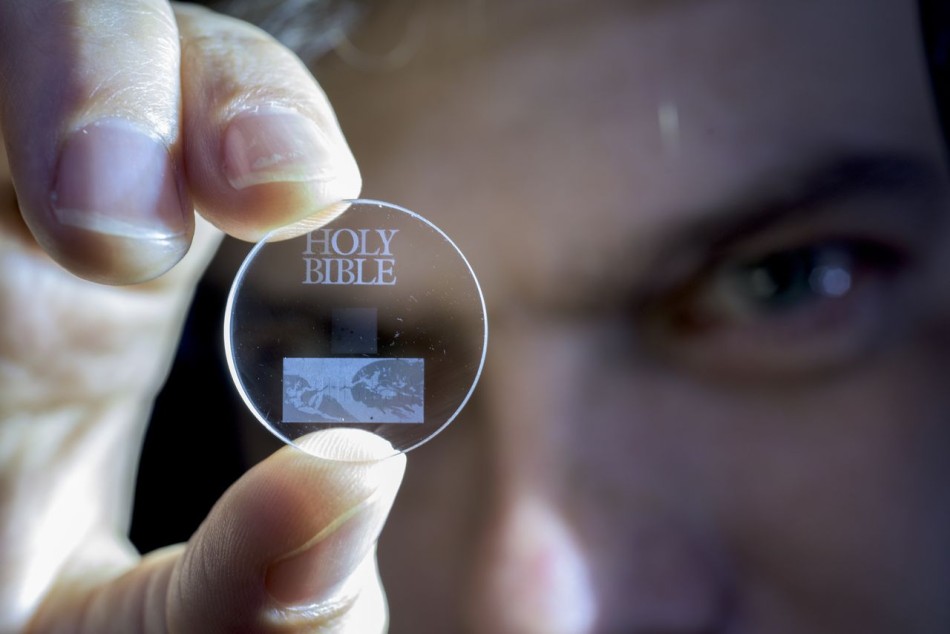 Photographs fade, books rot, and even hard drives eventually fester. When you take the long view, preserving humanity’s collective culture isn’t a marathon, it’s a relay — with successive generations passing on information from one slowly-failing storage medium to the next. However, this could change. Scientists from the University of Southampton in the UK have created a new data format that encodes information in tiny nanostructures in glass. A standard-sized disc can store around 360 terabytes of data, with an estimated lifespan of up to 13.8 billion years even at temperatures of 190°C. That’s as old as the Universe, and more than three times the age of the Earth.

“WE CAN ENCODE ANYTHING. JUST GIVE US THE FILE.”

The method is called five-dimensional data storage, and was first demonstrated in a paper in 2013. Since then, the scientists behind it say they’ve more or less perfected their technique, and are now looking to move the technology forward and perhaps even commercialize it. “We can encode anything,” Aabid Patel, a postgraduate student involved in the research tells The Verge. “We’re not limited to anything — just give us the file and we can print it [onto a disc].”

In order to demonstrate the format’s virtues, the team from the University of Southampton have created copies of the King James Bible, Isaac Newton’s Opticks (the foundational text of the study of light and lenses), and the United Nations’ Universal Declaration of Human Rights, which was presented to the UN earlier this month. A new paper on the format will be given tomorrow by the team’s lead researcher, Professor Peter Kazansky, at the Society for Optical Engineering Conference in San Francisco. 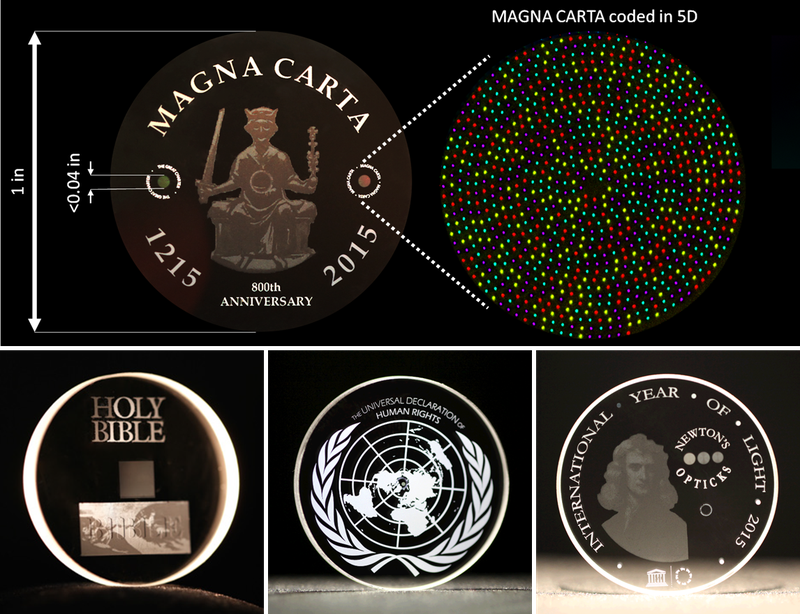 The one-inch discs used to encode new texts in 5D and a diagram illustrating the micron-sized dots (not to scale) which the nanogratings are stored in. (Image credit: University of Southampton)

To understand why these discs can store so much information for such a long time, it’s best to compare them to a regular CD. Data is read from a normal CD by shining a laser at a tiny line with bumps in it. Whenever the laser hits a bump. it’s reflected back and recorded as a 1; whenever there’s no bump, it’s recorded as a 0. These are just two “dimensions” of information — on or off — but from them, CDs can store anything: music, books, images, videos, or software. But because this bumpy line is stored on the surface of the CD, it’s vulnerable. It can be eroded either by physical scratches and scuffs, or by exposure to oxygen, heat, and humidity.

5D discs, by comparison, store information within their interior using tiny physical structures known as “nanogratings.” Much like those bumpy lines in the CDs, these change how light is reflected, but instead of doing so in just two “dimensions,” the reflected light encodes five — hence the name. The changes to the light can be read to obtain pieces of information about the nanograting’s orientation, the strength of the light it refracts, and its location in space on the x, y, and z axes. These extra dimensions are why 5D discs can store data so densely compared to regular optical discs. A Blu-ray disc can hold up to 128GBs of data (the same as the biggest iPhone), while a 5D disc of the same size could store nearly 3,000 times that: 360 terabytes of information.

These discs can potentially last for so long because glass is a tough material which needs a lot of heat to melt or warp it, and it’s chemically stable too. (Think about all those science experiments that use glass beakers to contain reactive materials without anything bad happening to them.) This makes the 5D discs safe up to temperatures of 1,000°C, say the researchers.

5D data storage obviously has potential as an archival format for museums and galleries, but the scientists involved believe it could be also be commercialized in the not-too distant future. Although the expensive lasers needed to fabricate the discs aren’t going to move out of the lab any time soon, the discs can be read relatively easily, with the team from Southampton suggesting the equivalent of a DVD player for 5D information could be developed in decades. “The concept and the development of it is ready to go,” says Patel. “It’s a matter of developing the technology so we can then make it readily available for commercial purposes.”

This seems ambitious though, given the inertia that has to be overcome when introducing any new storage medium. There are also rival techniques being developed and theorized. Hitachi is working on its own form of glass-based data storage, and in 2014, researchers simulated a “liquid hard drive” that would use nanoparticles suspended in a solution to store data. At least storing data in glass discs that can outlive the Earth sounds almost normal by comparison.

“Who knows what’s going to happen thousands of years down the line, no one can predict that,” says Patel. “But what we can guarantee is that we have the ability to store the culture, language, and essence of the human race in a simple piece of glass. For future civilizations — or whatever else is out there.”