For the first time, scientists have built a transistor out of carbon nanotubes that can run almost twice as fast as its silicon counterparts.

This is big, because for decades, scientists have been trying to figure out how to build the next generation of computers using carbon nanotube components, because their unique properties could form the basis of faster devices that consume way less power.

“Making carbon nanotube transistors that are better than silicon transistors is a big milestone,” said one of the team, Michael Arnold, from the University of Wisconsin-Madison. “This achievement has been a dream of nanotechnology for the last 20 years.”

Imagine a tiny, cylindrical tube that’s approximately 50,000 times smaller than the width of a human hair, and made from carbon atoms arranged in hexagonal arrays. That’s what a carbon nanotube wire would look like if you could see it at an atomic level.

Because of their size, carbon nanotubes can be packed by the millions onto wafers that can act just like a silicon transistor – the electrical switches that together form a computer’s central processing unit (CPU).

Despite being incredibly tiny, carbon nanotubes have some unique properties that make them an engineer’s dream.

They’re more than 100 times stronger than steel, but only one-sixth as heavy. They’re stretchy and flexible like a thread of fabric, and can maintain their 1-atom-thick walls while growing up to hundreds of microns long.

“To put this into perspective,” says Washington-based carbon nanotubes producer, NanoScience Instruments, “if your hair had the same aspect ratio, a single strand would be over 40 metres long.”

And here’s the best part: just like that other 1-atom-thick wonder-material,graphene, carbon nanotubes are one of the most conductive materials ever discovered.

With ultra-strong bonds holding the carbon atoms together in a hexagonal pattern, carbon nanotubes are able to produce a phenomenon known aselectron delocalisation, which allows an electrical charge to move freely through it.

The arrangement of the carbon atoms also allows heat to move steadily through the tube, which gives it around 15 times the thermal conductivity and 1,000 times the current capacity of copper, while maintaining a density that’s just half that of aluminium. 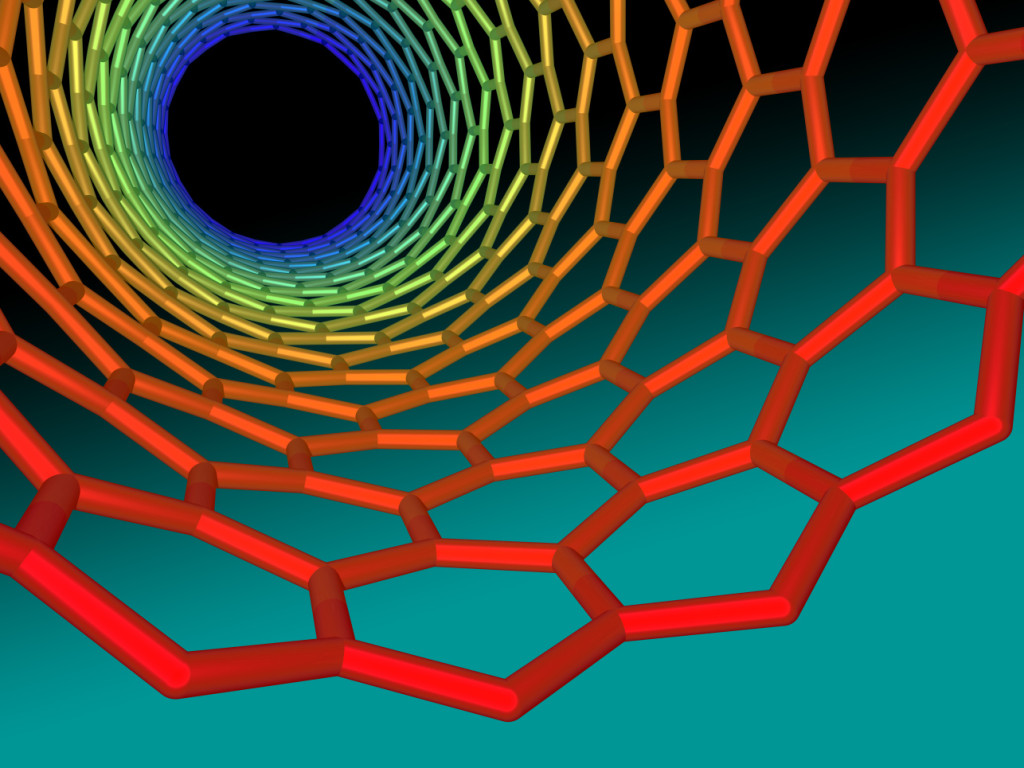 Because of all these amazing properties, these semiconducting powerhouses could be our answer to the rapidly declining potential of silicon-based computers.

Right now, all of our computers are running on silicon processors and memory chips, but we’ve about hit the limit for how fast these can go. If scientists can figure out how to replace silicon-based parts with carbon nanotube parts, in theory, we could bump speeds up by five times instantly.

But there’s a major problem with mass-producing carbon nanotubes – they’re incredibly difficult to isolate from all the small metallic impurities that creep in during the manufacturing process, and these bits and pieces can interrupt their semiconducting properties.

As Daniel Oberhaus explains for Motherboard, the technique works by controlling the self-assembling properties of carbon nanotubes in a polymer solution, which not only allows the researchers to clean out impurities, but also to manipulate the proper spacing of nanotubes on a wafer.

“The end result are nanotubes with less than 0.01 percent metallic impurities, integrated on a transistor that was able to achieve a current that was 1.9 times higher than the most state-of-the-art silicon transistors in use today,” he says.

Simulations have suggested that in their purest form, carbon nanotube transistors should be able to able to perform five times faster or use five times less energy than silicon transistors, because their ultra-small dimensions allow them to very quickly switch a current signal as it travels across it.

This means longer-lasting phone batteries, or much faster wireless communications or processing speeds, but scientists have to actually build a working computer filled with carbon nanotube transistors before we can know for sure.

Arnold’s team has already managed to scale their wafers up to 2.5 by 2.5 cm transistors (1 inch by 1 inch), so they’re now figuring out how to make the process efficient enough for commercial production.

The research has been published in Science Advances.