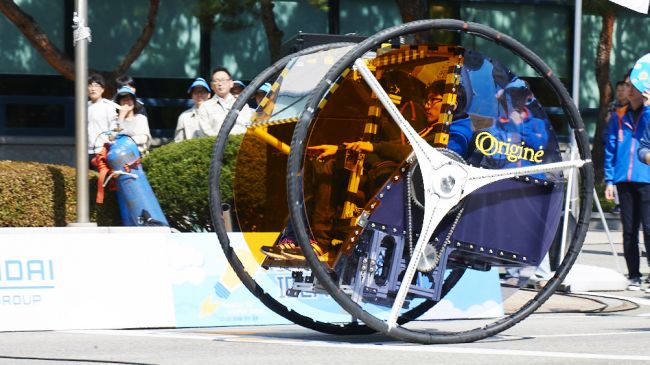 Each year, Hyundai and Kia host what is called the IDEA Festival – an opportunity for employees to show off the blue-sky concepts they’ve been working on. 2015 is the first year it’s been opened out to international press, so we went along to see what all the fuss was about. Given that just five minutes after arriving we passed someone driving a car while wearing an Oculus Rift, the scene was set pretty quickly.

But believe it or not, this turned out to be one of the less bizarre ideas of the day. We’ve rounded up all the things we saw at this year’s show, from a bike that washes your clothes to a car that turns into an instrument. Proceed with astonishment. 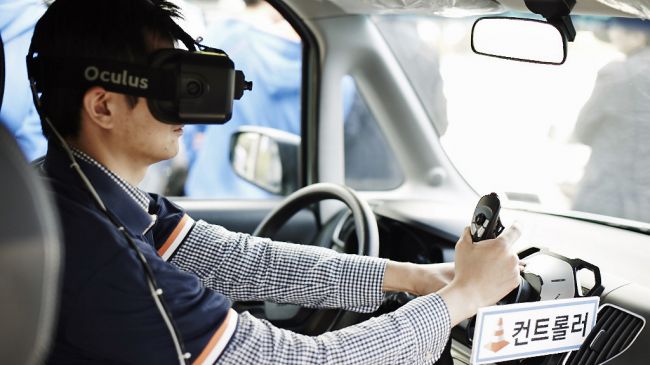 Wearing an Oculus Rift while driving surely can’t be safe, can it? At least, that’s what we thought. Driving Expansion is a concept that solves a problem which is particularly prevalent in South Korea, where driving test courses are in short supply. It involves the driver wearing an Oculus Rift which gives them a live view of what’s ahead, but with virtual objects rendered on top.

In the demo we saw the objects were cones, which the driver could then drive around as if they were really there. All that’s needed is enough space to do it. Inside the car is a built-in GPS system and a PC used to set the placement of the cones, meaning the car is essentially an all-in-one driving tutor.

The augmented cones looked a bit strange but as virtual reality technology improves, so will this idea. “We want to make it more three-dimensional, more realistic,” the team told us. 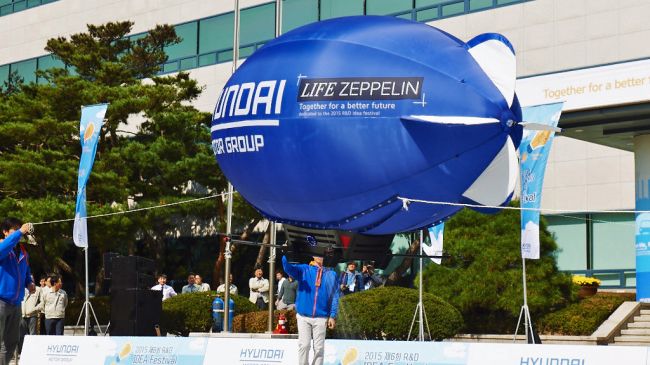 At about the length of a car, standing at around seven feet tall, and with four propellers to make it fly, the Life Zeppelin is more akin to a giant drone. The purpose of this blimp is to capture moisture in the air and then deliver it over dry areas, be it spraying crops or delivering drinking water.

It’s something that could be used in places that are affected by drought, but its creators believe it could even be useful in South Korea where it could help temper bad pollution. It could also be used to put out fires in hard-to-reach areas. 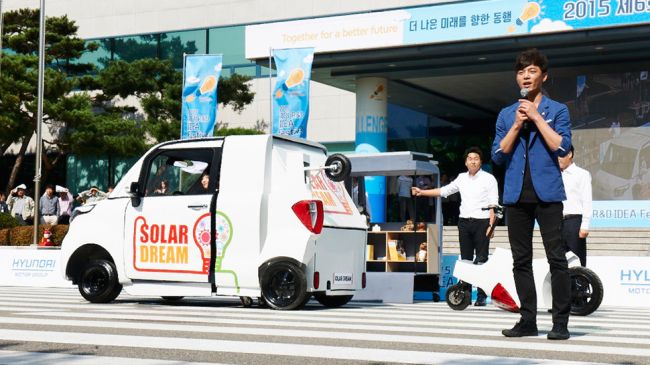 The Solar Dream Team is another idea aimed with the developing world in mind. It’s a small, unassuming car that’s solar powered, meaning it can be used to get children to school or to a hospital at minimal cost. On the back, disguised as two tail lights are – surprise! – a couple of electric bikes that can be detached and ridden like they were designed to be used by the goons of some James Bond baddy.

But that’s not all. The vehicle also comes apart and can be expanded into a living space for children to use. A true transformer. 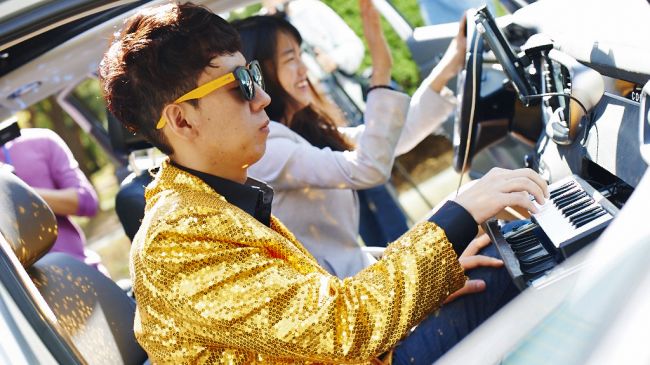 This one isn’t going to improve lives dramatically, but it will make journeys a hell of a lot more fun. The U Can Concert is a car that’s also a band: various parts of the interior including the steering wheel, dashboard and seat headrests become instruments at the press of a button, so you and your fellow passengers can rock while you ride.

There’s even a keyboard stowed away in the glove box, and you can connect a smartphone or tablet up to add even more music to the medley of madness.

Wafrica, the bike that cleans your clothes 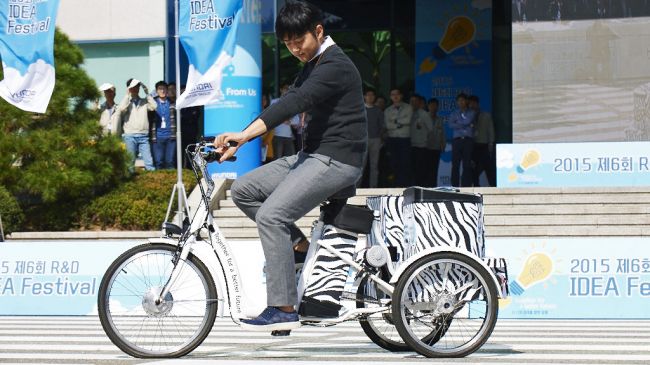 Wafrica is a bike that cleans water and your clothes – all through the power of pedalling. In some countries, people have to travel a long way to find clean water, but the team have found a solution that requires much less effort and won’t cost the world.

One minute of pedalling will purify 2.5 litres of water, while the back also functions as a washing machine. Again, this is something that could be hugely beneficial in third-world countries, giving people access to clean clothes and water via an easy-to-use solution. While there’s no need for electric, the bike can be powered by a motor, negating the need to pedal at all.

The team told techradar that Wafrica is a concept that’s ready to go to market – it’s just a case of getting people interested in the idea. 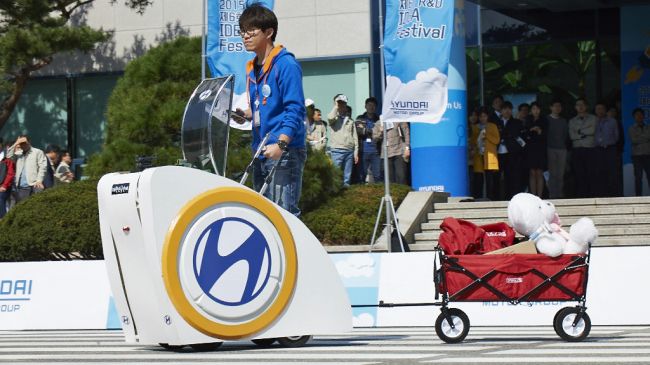 On the face, this personal mobility concept might not be quite as astounding as some of the other ideas at the show, but it could be a glimpse into transforming vehicles of the future. The small vehicle can be used to safely pull around a stroller and includes an alarm that will tell the driver not only if the baby is crying, but – using emotion-sensing technology – why it’s crying.

It can also be set to follow you around if you don’t fancy standing/sitting in it yourself or, if you prefer, it can be controlled using a smartphone. 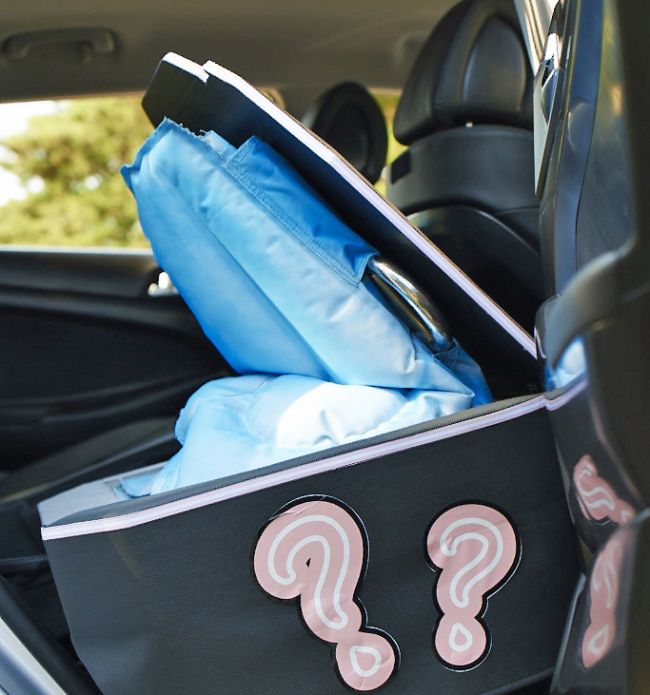 Car seats aren’t “sexy tech”, but this idea would definitely be useful for any parents who are sick of fiddling with child seats. This concept offers three different modes. The first is a more mobile seat that slides out the door, making it easier to attach a child’s seat on it. Then there’s an inflatable baby seat that will only pop up when you press a button, meaning the rest of the time it functions as a normal passenger seat.

Perhaps the most impressive feature is the third one: a monitor in the back will let the baby see its parent’s face (as long as they’re in the driving seat) while the driver can also see what the baby is up to. Or, if they prefer, they can switch it so the monitor plays cartoons which, let’s be honest, are much more interesting when you’re a baby.

Car for the disabled 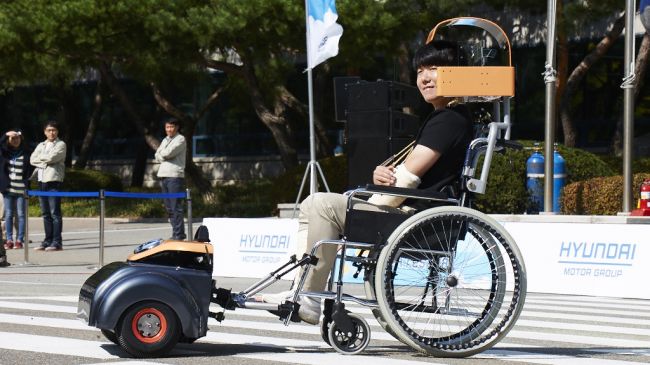 ‘Car for the disabled’ is an idea that turns any wheelchair into a motorised vehicle by adding on some intelligent attachments. “Our target was people who cannot use their arms or legs,” said the creators, and so the chair allows the user to drive and steer using head and shoulder movements.

Related  This is the flexible, foldable future of smartphone displays

The current model runs on a battery that lasts around 20 hours, but if power is not on hand, the wheelchair can continue to be used manually as usual. Many motorised wheelchair become completely unusable when the battery runs out.

The most important thing here is that it can be used on any normal wheelchair, potentially reducing a lot of the cost that normally comes with specialised motorised designs. 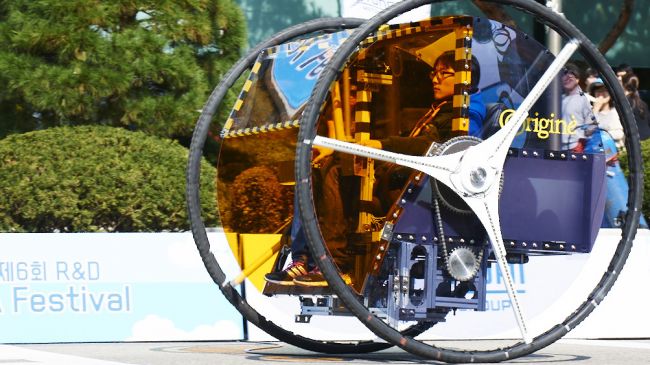 What you’re looking at isn’t an unused prop from Mad Max but a fully working, two-wheel vehicle with greater mobility in mind. Controlled by two joysticks, one for rotating each wheel (meaning this is halfway to being a cute tank) the Origine can easily go up slopes or over obstacles in the road.

It can run for just over 20 hours on a single charge and hit speeds of up to 60kph. We didn’t see it go that fast, but it certainly works. It also has a set of flashing lights on the side of each wheel for the full “carnival ride” effect. 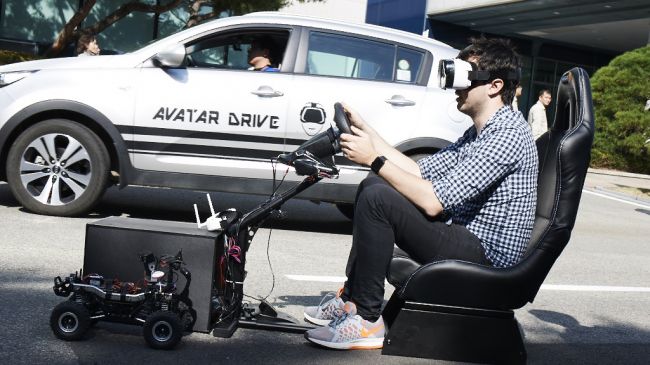 Avatar Drive lets you remotely take control of a car using a virtual reality headset and a gaming steering wheel. It sounds like a hacker’s biggest fantasy, but there are plenty of useful applications for this idea: driving your drunk friend home without leaving your sofa, dropping off a rental car, or perhaps this is the next evolution of Uber.

What’s more, the Avatar team said the technology could be placed into any commercial car and would work, meaning this is something that could feasibly come to market once a more reliable connection technology – most likely 5G – is available.

Don’t worry though, the driver can always take back control. We had a play with Avatar Drive ourselves and will post our impressions soon.