This could be Apple’s vision of the iPhone 10 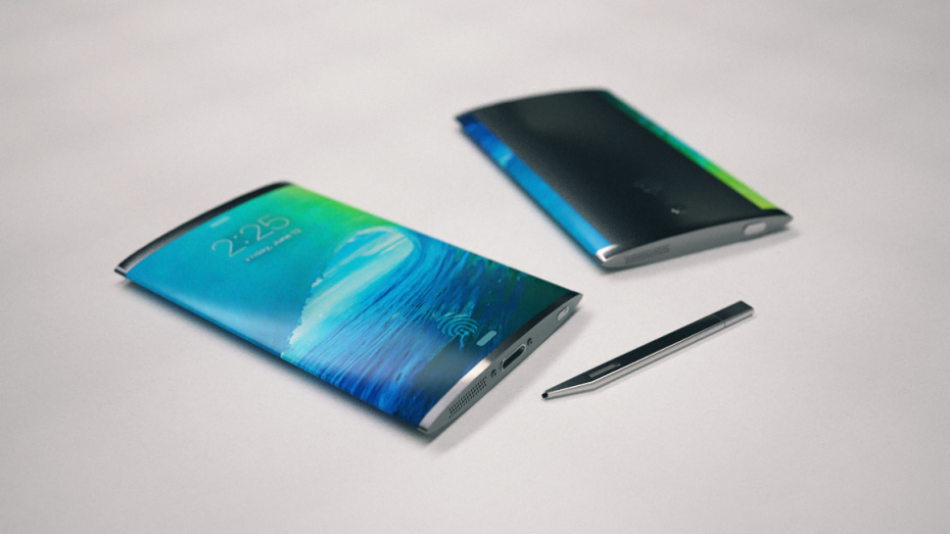 As far back as Ancient Greece, patents were in place to encourage innovation and reward inventors. But today, after interminable rounds of litigation and trolling, patents now seem to handicap brands or are used as bargaining chips in the smartphone wars and despite the big bucks, many smartphone and tablet patents never see the light of day.

Fluidly lapping across the front and rear of 6.2-inch chassis is a stunning 4K AMOLED touch display – imagine the love-child of a YotaPhone 2 and a Samsung Galaxy Edge, and you’re about on the money.

With both sides of the handset sporting a fully functional touchscreen, backside touch control requires no further plumbing and makes it a cinch to interact with those difficult-to-reach top corners using your index finger on the rear instead of your thumb on the front.

Talking of touch, while the home button is long-gone, it doesn’t spell the end of biometric innovations such as Touch ID. Providing you’re not in one of your pre-defined safe places, fingerprint authentication takes place on the screen itself.

A smart push on the phone’s bottom corner releases an adjustable stylus. At first sharp and precise for detailed writing and sketching, with a quick twist the nib extends for brush-like artistic flourishes.

The main camera promises “super-resolution based on optical image stabilisation” (courtesy of another patent) and allows for a handful of lenses, including a software controlled variable zoom lens, to be magnetically attached.

Sounds amazing? Well, if you take a look at the patents Apple has been working on for the past few years, it suddenly doesn’t sound that unlikely… 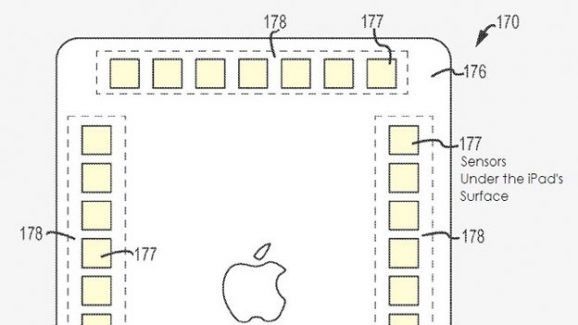 The touchscreen has revolutionised the way we use mobile devices. Today’s responsive capacitive displays mean we think nothing of prodding, gesturing and swiping our way around apps and games. But greasy fingerprints and the inherent imprecision of the human finger mean there’s still room for touch interfaces to be improved.

A patent awarded to Apple entitled Backside Touch Control could provide an additional input for iPad users, transforming the rear of the tablet into an intriguing alternate input surface.

It sounds like good sense. After all, there’s a whole rear surface at least the size of the screen that generally remains unused, save for some branding and a camera. The patent suggests a number of ways our idle fingers might be gainfully employed to enhance the interface.

Of course, rear controls are nothing new for owners of the Sony PS Vita who’ve long benefited from rear touchpads. And with three-quarters of app store revenues now coming from game downloads it’s easy to see why Apple might want to help developers create interesting new gameplay experiences. 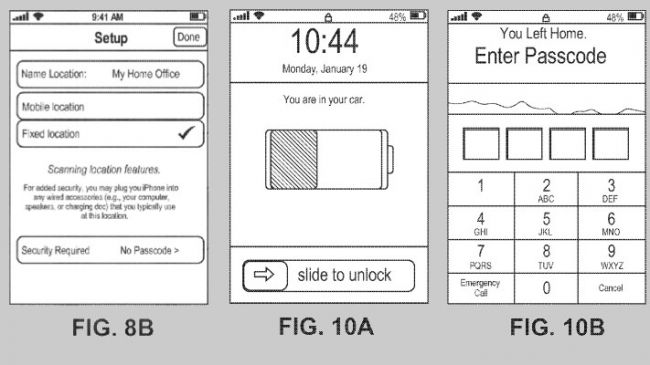 Customise your security based on your context (Credit: US Patent and Trademark Office)

Our phones are so packed with sensors that it’s getting a little confusing. A welcome update would be an intelligent phone that recognises the situations you’re in and reacts accordingly.

This could mean turning off phone notifications when you’ve dropped off to sleep, switching off your central heating when you’re away unexpectedly, or suggesting you knock off work a few minutes earlier if there’s a traffic jam on your normal route home.

This Apple patent brings contextualised security to the party, letting users customise their smartphone lockdown settings based on their location. For example, relaxed settings would mean no passcode is required when you’re in the car or at home, but a full Fort Knox-type security would kick in when you’re out shopping or in crowded places.

Granted, this may be less of a big deal for users of Apple’s TouchID-enabled devices, which only respond to the fingerprints of their rightful owners. Google and Android have also dipped their toes in these waters with Personal Unlockingand its knowledge of secure locations.

Nevertheless, this simple security power-up makes a lot of sense and, on the surface at least, seems simple to implement, perhaps making it one of the more likely candidates for a forthcoming iOS. 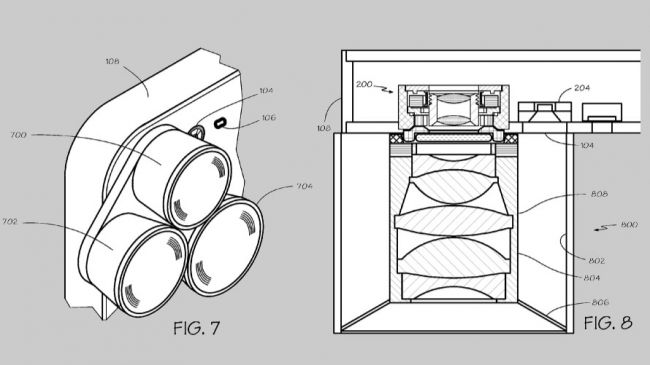 Magnetic lens magic for your smartphone (Credit: US Patent and Trademark Office)

Add-on lenses are a must-have for many smartphoneographers, with systems such as Olloclip, Moment and iPro offering fisheye, telephoto, macro and more.

However, attaching a lens to your handset can be an unwieldy affair requiring a special case or clip to keep the lens snuggly aligned with the device’s own camera lens.

Step forward, Apple, who in early 2014 was awarded the patent for a magnetic lens attachment system for its iDevices. Securing add-on lenses without the need for a case or clip is one of many tricks up this patent’s sleeve, as the filed document also describes a VCM (voice coil motor) within the handset that might magnetically control the optics in the detachable lens – think optical image stabilisation, zoom or autofocus.

While a magnetically attached camera lens has its attractions, Apple is also covering its bases with physical attachments. As AppleInsider points out, mere weeks after this magnetic attachment patent was granted, another surfaced for a physical bayonet attachment mechanism.

Despite the presence of a burgeoning add-on market, none of the main smartphone players have introduced a swappable lens system, unless you countSony’s QX series. But with more people ditching their dedicated camera in favour of the smartphone’s snapper, surely it’s only a matter of time before they do. 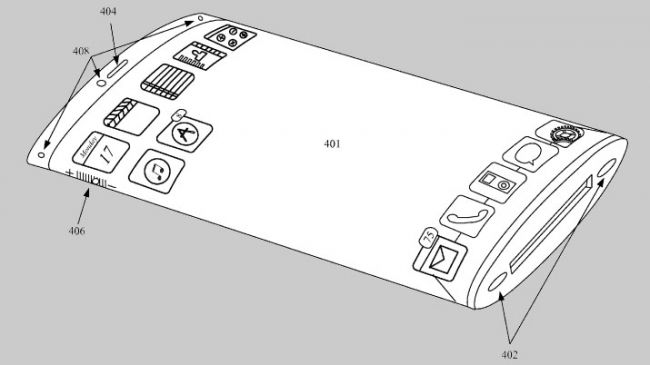 Curvaceous: flexible display tech inside your phone (Credit: US Patent and Trademark Office)

Oh, technology, how fickle you are. Was it really only 10 years ago that flat panels were the future and any display with the merest hint of a curve was damned as a relic from a prehistoric age?

Well, that’s the past, and curves are back in force, with screens everywhere now eager to shed their straight lines in favour of sweeping ones.

How convenient then that 2014 saw a patent granted to Apple for an “electronic device with wrap around display”. Among the filing’s legalese are plans to “maximise the utility of unused portions of these devices” or, in other words, to bag some actual use from the largely lifeless rear and sides of our devices.

Essentially this would provide a curved display wrapped around an entire handset. The patent goes on to suggest that only the portion of screen within the user’s field of view would be illuminated, presumably to save battery life. Worried about how touchscreen technology works with a curved screen? Don’t be: Apple has a “curved touch sensor” patent for that, too.

Related  Too Good to Be True: How to Spot a Fake iPhone

Beginning in 2013 with the Samsung Galaxy Round and the LG G Flex, by 2014 the genuinely interesting Samsung Galaxy Edge had extended its display to the spine of the handset (the patent for which went public almost a year before its eventual release) and the rarely unique Yotaphone 2 went fully dual-screened with an E Ink rear.

Will 2015 see a dual-screen iPhone? Given Apple’s metronomic tick-tock release cycle it seems unlikely, but this patent combined with the backside touch controls we, er, touched on earlier do suggest there’s plenty of room for innovation at the rear of our devices. 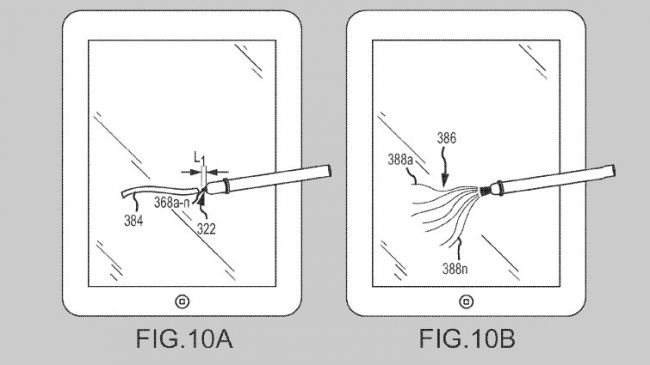 iStylus. You Stylus. We all Stylus (Credit: US Patent and Trademark Office)

“Who wants a stylus?” famously quipped Steve Jobs in 2007 as he unveiled his digit-driven iPhone to the world. Of course, Jobs’ cheap jibe was pre-iPad and little more than a shot at previous smartphone generations and their clunky, resistive touchscreens.

Since then we’ve witnessed the rise of the tablet, seen smartphone sizes grow and, alongside them, a healthy ecosystem of third-party styluses.

Times change and, along with one or two other high-profile about-turns, recentpatent filings suggest at least some Apple engineers could be preparing the ground for an iStylus.

The secret sauces in these stylus filings include detection of orientation and angle while writing, and an extendable nib that would allow the stylus to perform when retracted. This could be used like a stiff pencil for precise writing or as a longer multi-touch paintbrush for artistic types to doodle (possibly featuring multiple so-called “strands”).

If Apple does choose to enter the stylus game, it faces some stiff competition.

Samsung’s S Pen, the smart stylus bundled with the Galaxy Note phablets and tablets, raised eyebrows when it surfaced inside the original Galaxy Note at IFA in 2011. Despite many a pundit’s initial scepticism, the Note line and its stylus have flourished, including a bold collaboration with writing royalty Montblanc in 2014.

Featuring a thumb button and a dizzying degree of pressure sensitivity, we called its latest iteration “certainly the best handwriting experience on a smartphone” in our review of the Samsung Galaxy Note 4.

Could it appear on an iPhone? It could certainly work as an official accessory – although it would seem more suited to the iPad’s larger screen.