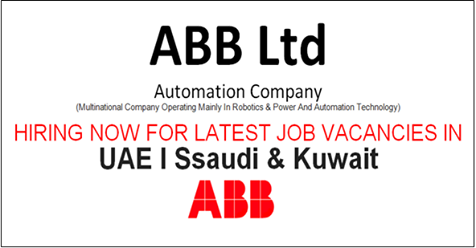 ABB is a global leader in power and automation technologies. Based in Zurich, Switzerland, the company employs 145,000 people and operates in approximately 100 countries. The firm’s shares are traded on the stock exchanges of Zurich, Stockholm and New York-Jobs in Dubai

ABB’s business is comprised of five divisions that are in turn organized in relation to the customers and industries they serve.The group is particularly proud of its record for innovation – widely recognized through countless awards and scientific accolades. Many of the technologies we take for granted today, from ultra efficient high-voltage direct current power transmission to a revolutionary approach to ship propulsion, were developed or commercialized by ABB.Today ABB is the largest supplier of industrial motors and drives, the largest provider of generators to the wind industry and the largest supplier of power grids in the world.