CHiP is the latest robot dog looking to leash your heart 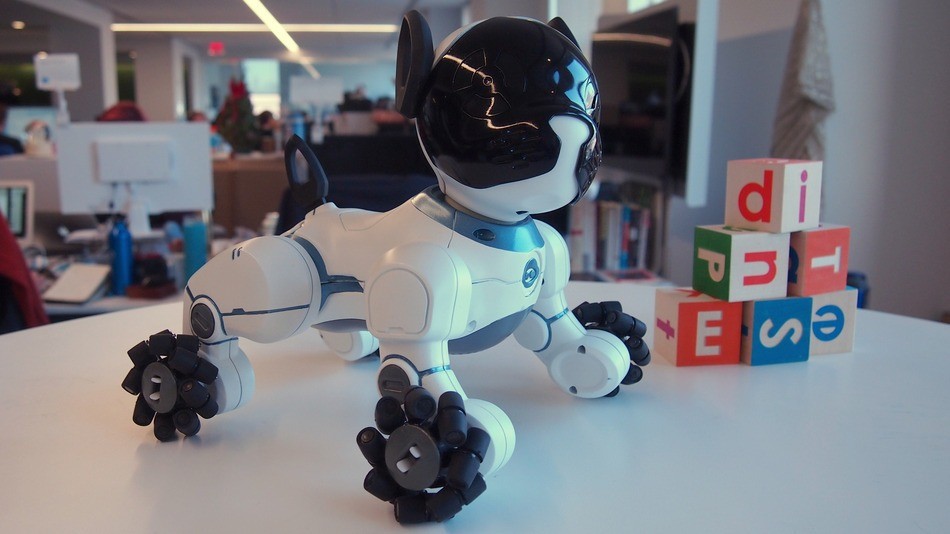 I’ve seen robot dogs come and go over the years. They all had their charms. Some, like the Sony AIBO, were almost preternaturally smart. Others like iCybie, were slow, plodding and yet still somehow lovable.

Sadly, none of them have had the staying power of an actual pet.

Now a company called WowWee, which tends to trade in the hyperactive, remote-control-driven variety of cyber pooch, hopes to break that pattern with its Canine Home Intelligent Pet or “CHiP.”

The $199 black-and-white robot pup, which won’t arrive until sometime next year, has more smarts that your average robot toy dog. The prototypes I saw are already packed with sensors.

The head alone has an array of carefully hidden infrared sensors that give it a 360-degree view, which it uses to find its special ball and charging bed. CHiP also has Bluetooth so it can connect with its special Smart Band. Owners wear the band to send the robot dog likes — and to help CHiP keep track of you.

CHiP looks like a cute, big-headed puppy. Its paws are another matter. CHiP rolls around at high speed on a set of Meccanum wheels. The benefit of this unusual mobility system is that CHiP can roll in virtually any direction. That, when coupled with the robot pup’s startling speed, allows it to do things only real dogs usually do. 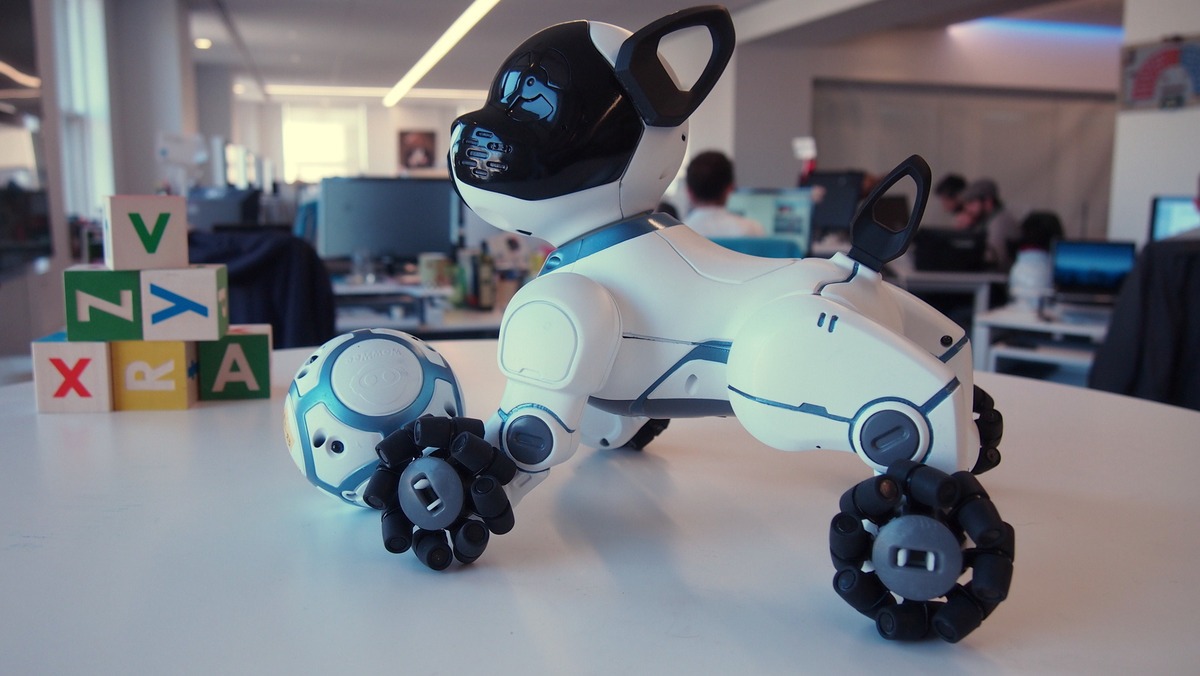 For example, I saw CHiP track and trap his ball even when it wasn’t rolled directly at it. The ball, which also has IR Beaconsense in it (it goes to sleep when not in use to preserve battery power), communicates with CHiP so the robot can “see” it during a rolling game of catch, or fetch.

In the demonstrations I saw, CHiP was incredibly agile and fast — but, like a toddler learning to walk, had trouble keeping its balance and, on more than one occasion, tottered over onto its face.

CHiP can sit, squat down, shimmy, dance around and make all sorts of dog sounds. It does seem alive. But I’ve fallen for other dogs, only to be disappointed by the lack of engagement on the robot’s part or by the lack of commitment by the company building the robots.

What, I asked WowWee executive Davin Sufer, makes CHiP different? “It acts with intent,” said Davin, explaining that the robot dog will act differently when you’re around. It will also keep itself busy, looking for its ball and reacting to its environment.

For example, as the sun sets, CHiP’s sensors will pick up the dimming light and will use its IR sensors to find its bed and self-charge. If it can’t find the bed and gets stranded, it may text you for help. CHiP will take a couple of hours to charge and should operate for two hours. 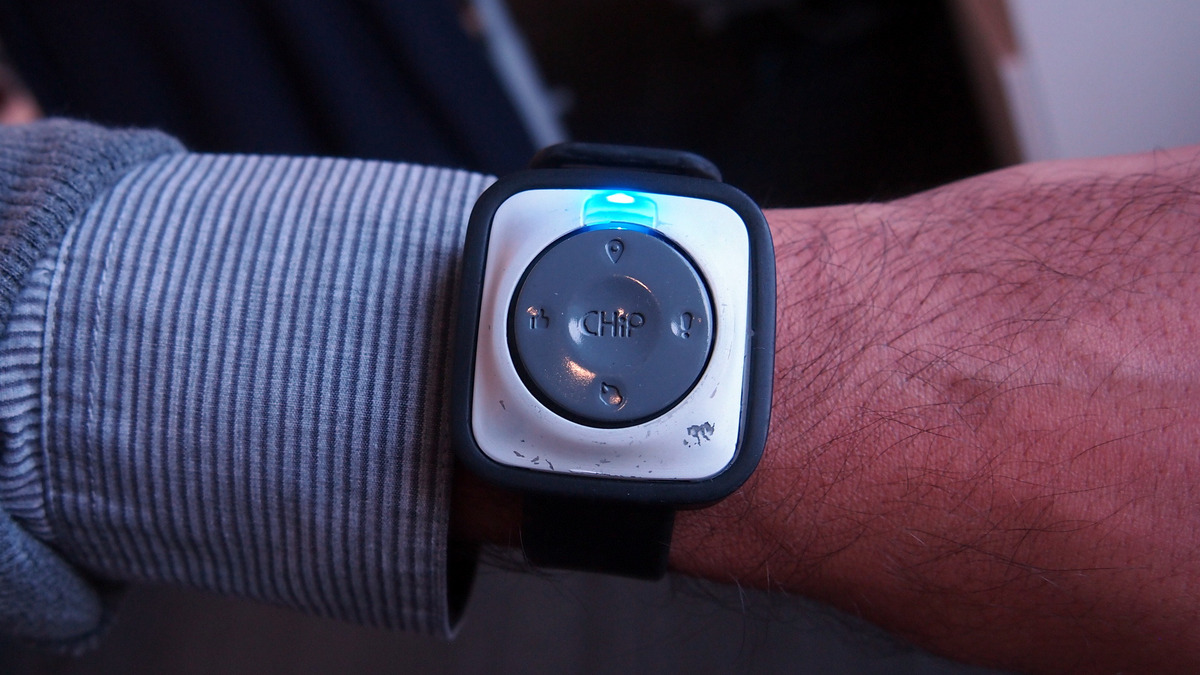 There’s no remote control for CHiP the robot dog, but you can communicate with it via this Smart Band.

CHiP won’t have a remote control. There will be an app, but it will mostly be for adjusting settings. WowWee really wants people to engage directly with CHiP. That said, there is that Smart Band, which will ship with CHiP. It’s there so the robo-dog can tell, based on Bluetooth, when you’re arriving home. It’s there so CHiP can follow you around and so you can “train” it. That training comes through the use of a Like button on the band, which you press when you want to reinforce something CHiP does.

As a result, CHiP will act differently in the presence of the band. If someone else has another band, CHiP will react to the reinforcements stored on that band. Additional bands should cost between $29 and $39.99.

Don’t buy a collar yet

CHiP is still under development. There were no touch sensors in the prototype I saw, but they are planned for the head, back and possibly the belly. There’s currently an open development/charging port on the belly that WowWee may or may not leave in place. That could be useful as a charging option if you leave the charging bed behind.

One thing the company does not plan to add is voice recognition, a surprising omission considering all the advancements in microphone and voice recognition technology. But Sufer told me that their studies have shown that it just isn’t that useful — for a robot dog, at least.

That sets CHiP apart from the electronic pup it most resembles, Zoomer. That too had wheels for feet (not Meccanum) and was very fast, but it mostly reacted to a fixed set of voice commands.

WowWee plans to officially announce CHiP early next year, and may launch a Kickstarter or Indiegogo campaign to support it.